PETALING JAYA, Dec 5 — A union representing cabin crew members of Malaysia Airlines (MAS) today threatened to picket over the national carrier’s refusal to the acknowledge the union and the firing of its president.

A meeting between MAS, the National Union of Flight Attendants Malaysia (Nufam) and the Human Resources Ministry, scheduled for this morning over the union’s grievances, has been postponed indefinitely.

The airline has also fired its chief steward and Nufam president Ismail Nasaruddin, after previously suspending him over his call for MAS chief executive officer Ahmad Jauhari Yahya to resign, triggering allegations of union busting.

“We may take an industrial action against MAS by calling for a picket, on the 27 and 28 of this month, tentatively.

“It all depends if MAS is still arrogant enough to not call this meeting, then it leaves no choice to the national union to do what it needs to do, to call for a picket, which is accordance to our industrial law,” said Ismail, who was sacked on November 29.

He said the union’s lawyers have suggested that it take the right steps to resolve its many complaints against the airline.

“Which is to file a violation of industrial relations act, that would be the first.

“The second would be submission of my registering of complaint to the industrial relations, which is under section 20 as an employee.

“Thirdly, of course there is going to be legal recourse which I would not express right now, but on a later date,” he said.

Ismail, who had been with the airline for the last 25 years, pointed out that a directive from the Human Resource Ministry on September 23 had stated that MAS Employees Union (Maseu) can no longer represent cabin crews as it has recognised Nufam as the only union to represent the airline’s cabin crew.

Today, Ismail repeated allegations of union busting against MAS, adding the management and Maseu were colluding to prevent crew members from quitting the former union for Nufam.

Maintaining that Nufam was not in any violation, Ismail said all they wanted was for MAS to be fair and professional by engaging with the union to negotiate a fresh collective agreement.

He accused Maseu of being ineffective in voicing out concerns and fighting for the rights of its cabin crew members, who claim to have been sidelined for years, compared to their colleagues. 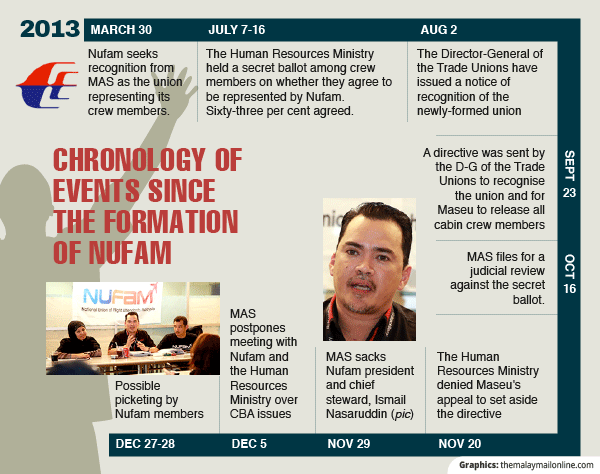 The outspoken president said despite being an award-winning cabin crew, their pay did not reflect the achievement.

"While we are talking, others have enjoyed endless benefits, executives and managers have enjoyed the perks while we suffer, the cabin crew have been denied their rights," he said.

Ismail also pointed out that 40 non-government organisations (NGO), both local and from abroad, have submitted a petition to Prime Minister Datuk Seri Najib Razak and the airline to seek for his dismissal to be overturned.

Nufam executive secretary Mahmood Abdullah told The Malay Mail Online that its members will resort to a walkout if its president's termination is not withdrawn.

"On behalf of Nufam and on behalf of all the excos of Nufam, we are demanding MAS to withdraw the termination letter against the president of Nufam Mr Ismail Nasaruddin, failing which, we will walk out in protest" he said, while calling for the resignation of the top leadership in the airline.

MAS reported a net loss of RM176 million for the second quarter of 2013 financial year, against RM349.2 million in the same period last year, despite an increase in revenue from RM3.3 billion to RM3.8 billion.