Protesters face off with police officers during the 'Turun' protest at Sogo shopping complex in Kuala Lumpur, July 23, 2022. — Picture by Firdaus Latif
Follow us on Instagram, subscribe to our Telegram channel and browser alerts for the latest news you need to know.
By Soo Wern Jun

KUALA LUMPUR, July 23 — A crowd of over 100 people who are protesting against rising prices were blocked by police outside of the Sogo shopping mall here as they attempted to march towards Dataran Merdeka.

The group, that calls itself the Turun Movement consisting of mainly student groups, was unable to move further as they approached Jalan Tunku Abdul Rahman (Jalan TAR) where police formed several layers of blockade for over 1km on the road.

Turun Malaysia committee member Amir Ab Hadi told the crowd to not be afraid and march forward although they were blocked by the police.

“Don’t be afraid, come closer,” the crowd was told as the police pushed back on the protesters who were moving towards Jalan TAR. 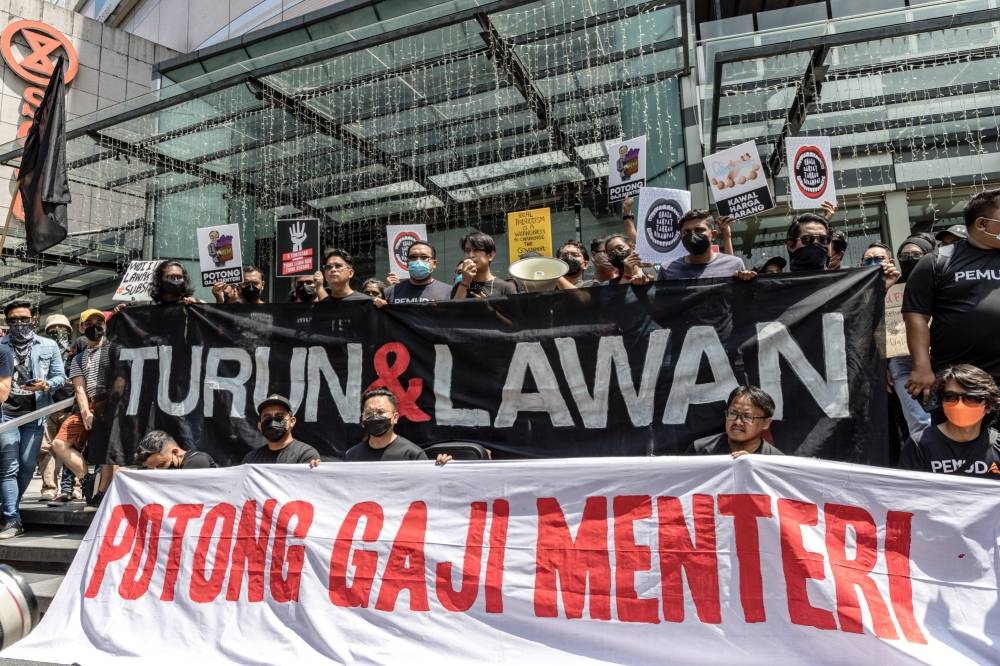 Protesters eventually came to a halt as police personnel marched towards them from the opposite direction, causing a commotion which forced the march to a stop.

Amir, before proceeding with the march questioned the Sabah state assembly for passing a Bill to increase the salary of the state's chief minister along with state assemblymen and state Cabinet ministers. by 40 per cent.

“Why are ministers’ salaries being increased when the people are suffering to make ends meet?" he asked.

“How is that they passed the Bill just like that, while we are on the ground not knowing where to find the next day’s expenses?” Protesters face off with police officers during the 'Turun' protest at Sogo shopping complex in Kuala Lumpur, July 23, 2022. — Picture by Firdaus Latif

International Islamic University Malaysia student union president Aliff Naif when met at the gathering said the protesters' demands do not belong to just students, but others in the country as well.

“We will not stop protesting until all our demands are met. Especially to bring down the price of goods and cut ministers’ salaries," he said when met by reporters.

“We are disappointed and the people is suffering. Students from campuses had to cut down on their meals as they don't have enough food. Whereas the ministers all are having a good time with high salaries while the people’s wages are 12 times lower than their salaries." Also present at the protest was newly-elected PKR Youth chief Adam Adli, who said the event today is just the beginning to more street rallies on pressing issues.

“There will be more street rallies, this is quite a good turn out and it is a start.

“Rallies bring people together and it is a space for them to voice out their unhappiness with the current state of things,” he said when met by Malay Mail.

He added that although the Turun Malaysia movement is led by students, PKR Youth wanted to also lend support as rising costs of living is an issue that is not only affecting a small number of students.

The purpose of the rally today is to demand the government to take immediate action on the rising prices of necessities.

Other demands made include the deduction of ministers’ salaries and addressing the issue of food security.