Datuk Seri Zahid Hamidi is pictured at the Kuala Lumpur Court Complex July 7, 2022. — Picture by Firdaus Latif
Follow us on Instagram, subscribe to our Telegram channel and browser alerts for the latest news you need to know.
By Ida Lim

KUALA LUMPUR, July 7 — Former deputy prime minister Datuk Seri Ahmad Zahid Hamidi today appeared to be frustrated during his trial, complaining that the prosecution was allegedly being unfair to him and claimed that it was seeking to trap him with questions.

While going through documents such as cheques and the ledger of a law firm handling his charity Yayasan Akalbudi’s funds, Ahmad Zahid also suggested that it would be immoral for him to question those entrusted with the charity’s funds.

Ahmad Zahid was asked if money changer Omar Ali Abdullah — which Ahmad Zahid had entrusted to collect or compile RM7.5 million of purported donations in cash into the law firm’s client account — had brought two cheques physically to him and told him these were donations for charity.

Ahmad Zahid then replied: “Yang Arif, when someone is entrusted to credit donations and the donation is not on my personal name but is a donation to a foundation, the foundation’s account is held by a law firm, and it is clear that donation has been credited, it is not moral if we ask who is the donor, whether the money was deposited or not; for example, with the trust with there being the monthly statement and ledger shown. We should have trust because I am confident all of them have the intention to obtain pahala (divine rewards) as it is for amal jariah (charity).

“It is not fair, if the question which I mentioned just now, I also ask repeatedly same as what was asked to me, being asked repeatedly so that I am trapped.”

Ahmad Zahid earlier confirmed that the records in the monthly statements for the bank account matched the transactions recorded in the law firm’s ledger.

Deputy public prosecutor Harris Ong Mohd Jeffery Ong then immediately replied by saying: “You talk about trust and in this court is for justice, all parties are looking for justice and you are innocent until proven guilty, so to obtain justice, the full facts have to be presented.”

Ahmad Zahid’s lead defence lawyer Hisyam Teh Poh Teik interjected and suggested that this should be left to submissions.

High Court judge Datuk Collin Lawrence Sequerah then said he believed Harris was responding to Ahmad Zahid’s comment of being asked the same questions repeatedly, but then said the prosecution has made its point and asked them to move on to the next question.

Yesterday, Ahmad Zahid repeatedly stressed the need for “husnuzon” or the need to give the benefit of doubt to donors who gave millions of ringgit purportedly for charity, suggesting it would be “funny” to ask donors if the source of their donations were from legal or illegal sources.

Both Ahmad Zahid and the prosecution later got into another brief squabble of words, after he gave elaborate answers without directly answering a question posed. 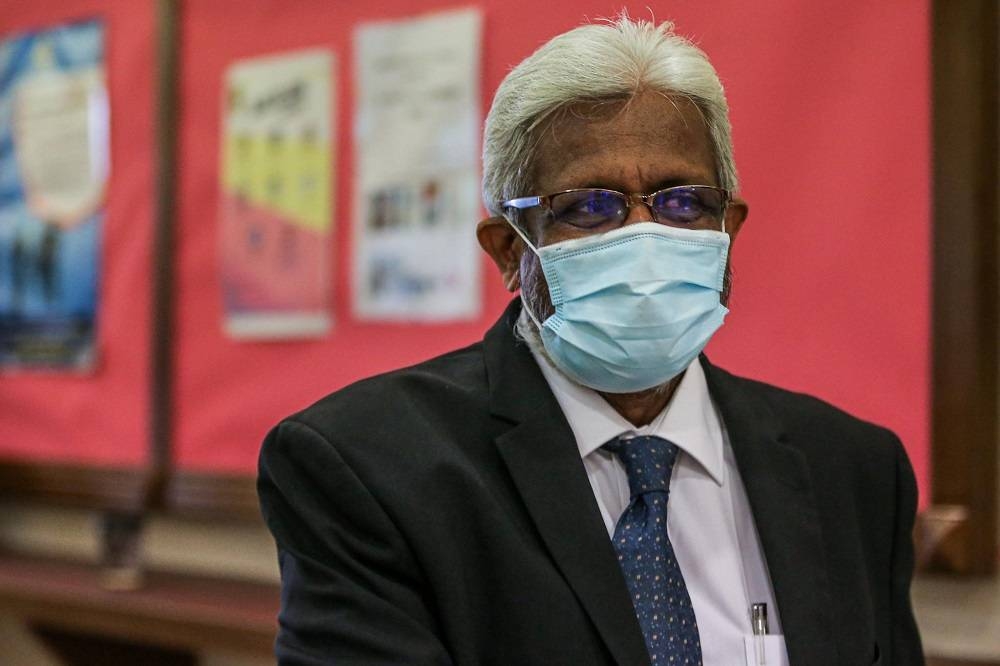 Caution to Ahmad Zahid on alleged evading of question

Ahmad Zahid then said “Yang Arif, as I mentioned before this, it is the discretion according to law for any law firm to open fixed deposits to ensure the interest of the funds held by that law firm.”

Harris: Meaning you did not halang (block) it lah?

Ahmad Zahid: How do I want to block it, that is permitted for law firms.

Harris: How law firms act is up to the law, but on your part, as a client — although no valid (appointment) letter) — as a client, you did not block such action after knowing that it has happened?

Ahmad Zahid: Yang Arif, the money is not lost, the same amount was transferred as fixed deposits, I already said in this court, that fixed deposit is to obtain profits in the form of interests, the money is not lost. So the question of blocking or not is very subjective, because what is done by Muralidharan is according to the ethics of the law firm that takes care of the client account. Block, no, I dare not take action to block or not, because that is his discretion.

At this point, Harris cautioned Ahmad Zahid that his conduct could be viewed unfavourably by the court.

“I wish to inform, when my question is simple, ‘whether block or not’, your conduct, it is important for the court to know, the answer from your own mouth, we need to know on your part, what is your action, whether you blocked or not. Your action in avoiding my question, the court can take notes, ‘demeanour’ in court terms, the court can make remarks that the witness is avoiding questions when being cross-examined. But I don’t want this to happen, when I give you chance to answer whether you blocked the lawyer’s actions or not,” Harris said.

Ahmad Zahid then replied “Yang Arif, I answer what is true, block or not. How can I block? If want me to answer ‘yes or no’, I will answer ‘yes’ or ‘no’, but when I am not asked ‘yes or no’, I give explanations.”

Harris: Agree with me, you didn’t block that action, yes or no?

Harris: You didn’t block, agree with me, because your interests are guaranteed, namely the money was credited, transferred to fixed deposits, I don’t have to worry, all is guaranteed, that’s why you don’t block?

Ahmad Zahid: I disagree, Yang Arif, this is not for personal interest, it is for Yayasan Akalbudi’s interests.

Throughout this trial, Ahmad Zahid has said that cheques which made its way to Lewis & Co’s client account were donations for charity works by Yayasan Akalbudi.

Yayasan Akalbudi was formed with the stated aim of eradicating poverty and enhancing the welfare of the poor, and Ahmad Zahid is a trustee of the foundation and, later, also its sole signatory for cheques.

Later in the afternoon, Ahmad Zahid denied that he was merely using Lewis & Co’s client account to help him launder illegal funds.

Zahid defends not asking two donors where RM7m was from, says would be ‘funny’ to question if money was dirty