A Malaysian flag flutters next to a Chinese flag at Tiananmen Square in Beijing, China August 19, 2018. — Reuters pic
Follow us on Instagram, subscribe to our Telegram channel and browser alerts for the latest news you need to know.
By Zurairi A.R.

KUALA LUMPUR, July 1 — A recent survey by Pew Research Centre saw 60 per cent of its Malaysian respondents saying they viewed China favourably, and just 15 per cent of those polled saying relations with China were bad.

In the survey by the Washington-based pollster, respondents in Malaysia and its neighbour Singapore were among the minorities in the 19 countries surveyed that said they preferred strengthening economic relationships with China even to the point of ignoring its alleged human rights violations.

“Across most places surveyed, a majority of people think it is more important to try to promote human rights in China, even if it harms economic relations with China.

“In Israel and most places surveyed in the Asia-Pacific region, the opposite is true; majorities in Malaysia, Singapore and South Korea favour strengthening their economic relationships with China, even if it means not addressing human rights issues,” said the report titled “Negative Views of China Tied to Critical Views of Its Policies on Human Rights“ released this week.

In the survey, Malaysia and Singapore had the highest approval rating for China, with the island city-state recording the highest rate of 67 per cent favouring China.

“Malaysians and Singaporeans see China differently. Six in ten or more in both countries say they hold a favourable opinion of China. 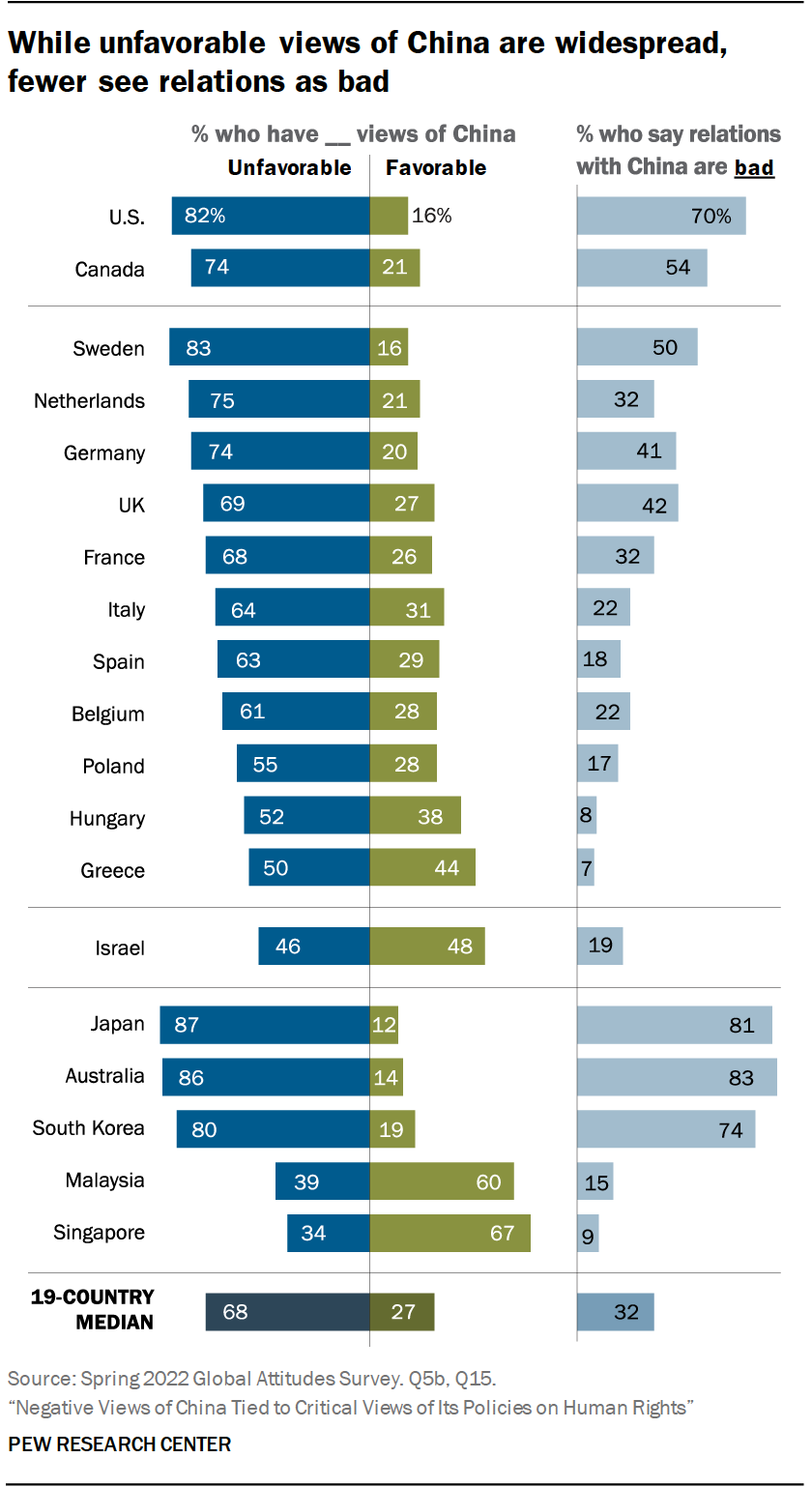 In Malaysia, the issue of biggest concern with China was its military power, with 31 per cent of respondents here saying it is a “very serious“ problem for the country.

In comparison, just 25 per cent pointed to China’s policies on human rights as the biggest issue.

Other concerns are economic competition with China (28 per cent) and China’s involvement in domestic politics here (26 per cent).

Furthermore, 55 per cent of Malaysians surveyed said the country should prioritise strengthening relationships with China even if it means not addressing the human rights issue. 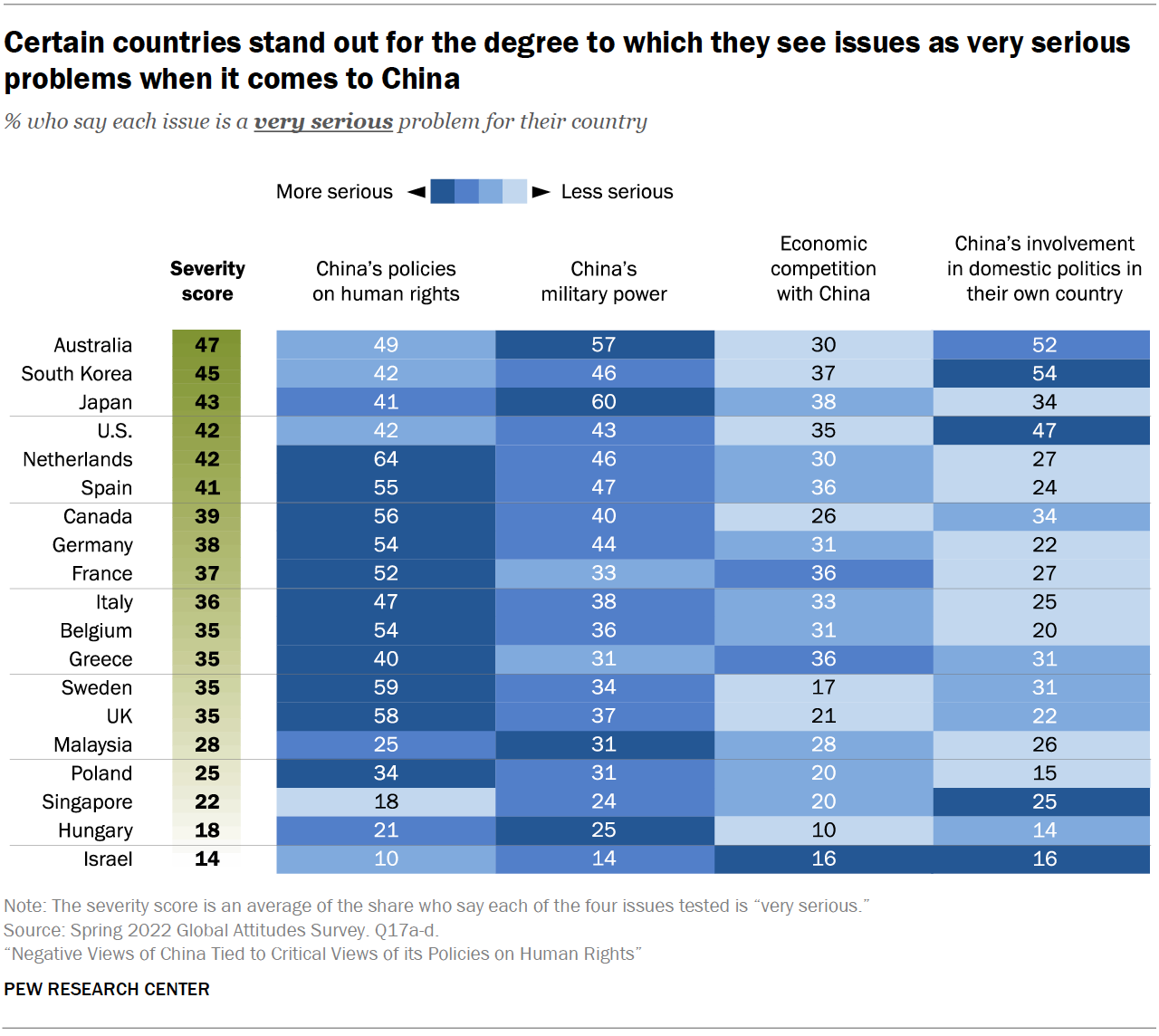 This comes as 84 per cent of Malaysian respondents said the current relations between Putrajaya and Beijing are “good“.

“In both Singapore and Malaysia, more than eight-in-ten say relations between their country and China are good. This includes about a quarter in both countries who say the relationship is very good,” the report said.

A previous survey by Pew Research showed that Malaysian respondents were confident of Chinese president Xi Jinping, with 62 per cent saying they had confidence in him “doing the right thing” on global affairs.

Singapore was the only country among the other 17 who shared the same opinion as Malaysian on Xi, with a higher percentage of 69 per cent viewing Xi positively. 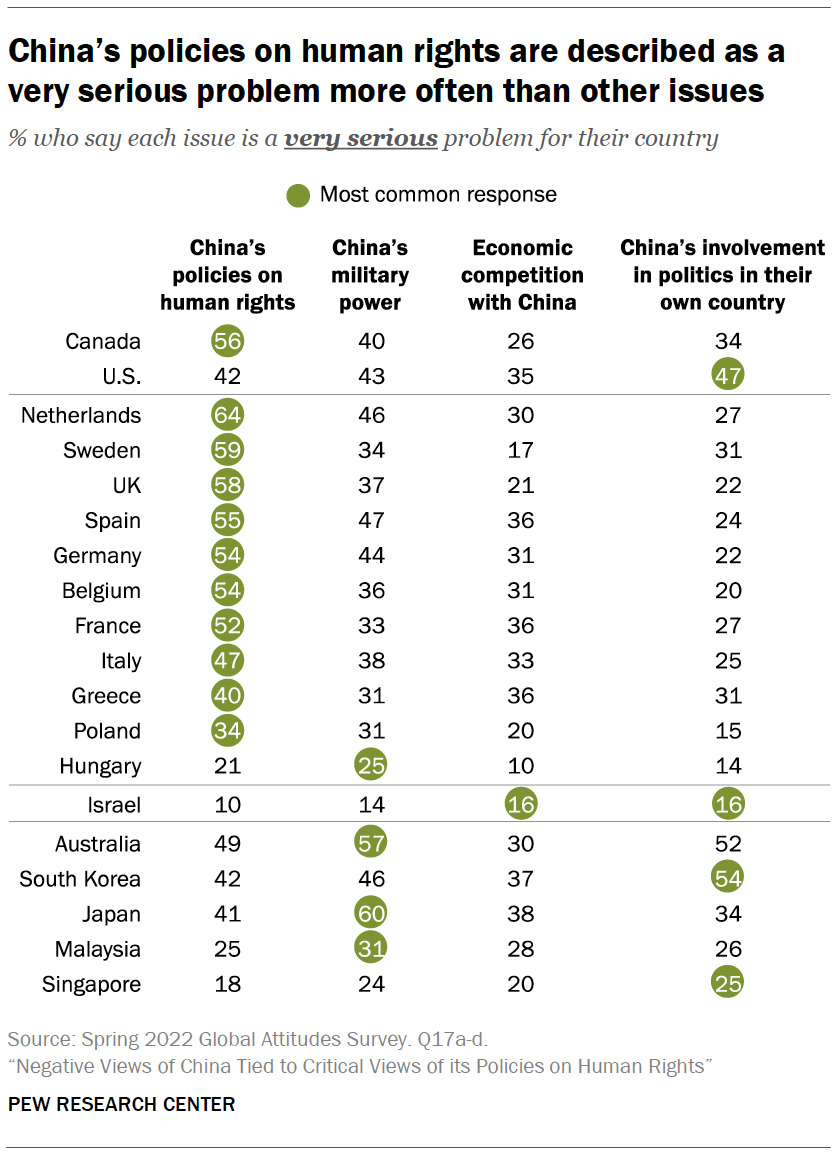 China remains Malaysia’s biggest trading partner for the 12th consecutive year, with 18.6 per cent of Malaysia’s total global trade worth RM329.77 billion in 2020.

The report draws on nationally representative surveys of 20,944 adults across the countries from February 14 to June 3 this year.