Tun Dr Mahathir Mohamad says the Agong had not proposed PKR’s Datuk Seri Dr Wan Azizah Wan Ismail to be interim prime minister in February 2020. — Picture by Shafwan Zaidon
Follow us on Instagram, subscribe to our Telegram channel and browser alerts for the latest news you need to know.
By IDA LIM

The former two-time prime minister disputed the assertion made by former attorney general Tan Sri Tommy Thomas in his newly-released memoir My Story: Justice in the Wilderness, calling it “nonsense” that the Agong wanted Dr Wan Azizah who was at that time his deputy, to temporarily lead the government.

Instead, Dr Mahathir said it was the King who wanted him to remain in office as “interim prime minister”, though there was no legal provision for such a post.

“Tommy knew nothing about my resignation. According to Tommy I told him that the Agong had wanted to appoint Wan Azizah as Interim Prime Minister. This is nonsense.

After resigning on February 24, 2020 as Parti Pribumi Bersatu Malaysia chairman and subsequently as prime minister, Dr Mahathir said he then met with the Yang di-Pertuan Agong on the afternoon of the same day.

“I believe he had already received my resignation letter when I met him that afternoon. He at first refused to accept my resignation. I was adamant and he then accepted it. But immediately he asked me to be interim Prime Minister.

“He never proposed any other name, certainly not Wan Azizah, the Deputy Prime Minister (DPM). I never offered myself but it would be rude for me not to accept his proposal,” Dr Mahathir added.

Dr Mahathir was made interim prime minister on February 24, the same day he resigned.

The palace said that he was appointed to the post to manage the country’s administration, while waiting for a new prime minister to be appointed and a new Cabinet to be formed. 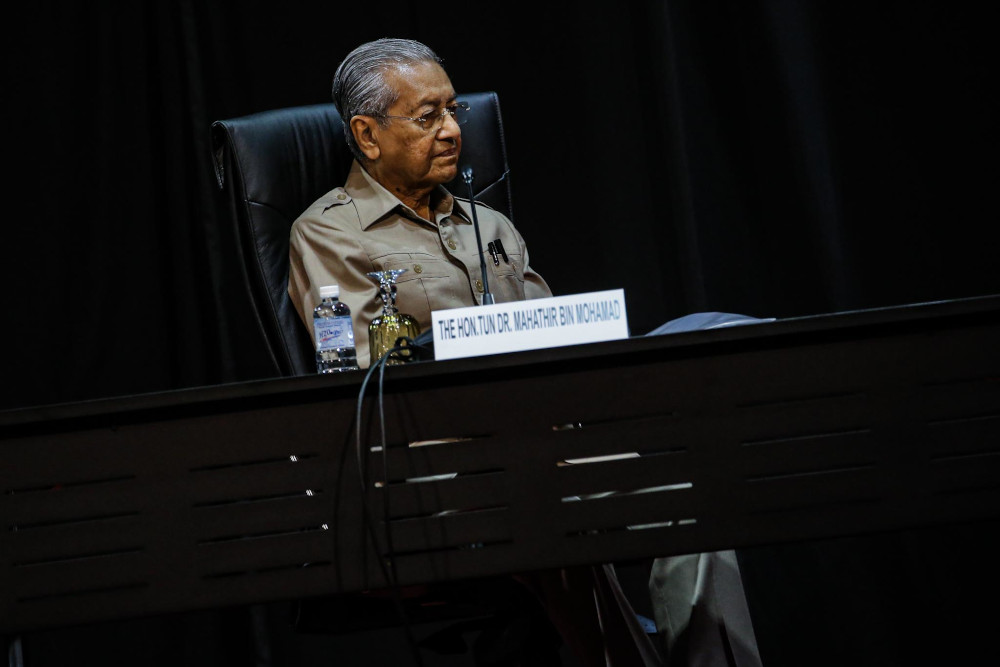 Dr Mahathir said that neither Dr Wan Azizah as the deputy prime minister in the PH administration nor any PH member could take over from him as the PH coalition was at that time no longer the federal government due to its collapse from a loss of majority. — Picture by Hari Anggara

In the same blog post, Dr Mahathir said that neither Dr Wan Azizah as the deputy prime minister in the PH administration nor any PH member could take over from him as the PH coalition was at that time no longer the federal government due to its collapse from a loss of majority.

Dr Mahathir argued that the Cabinet in the PH government could not be sustained when PH lost its majority and cited Article 43(4) of the Federal Constitution as support.

The provision states that the prime minister must tender the Cabinet’s resignation once he/she ceases to command majority support from MPs in the Dewan Rakyat.

While acknowledging that his resignation as prime minister was personal, Dr Mahathir argued that the Cabinet naturally could not stand when the PH government collapsed.

“Yes. My resignation was personal. I never submitted the resignation of the Cabinet. But when the PH government fell, there was no way the Cabinet could remain. It had to go down with the government,” he argued.

Appearing to respond to Thomas’ reported argument that it would have been in line with the Federal Constitution to appoint Dr Wan Azizah as the interim prime minister, Dr Mahathir said: “I cannot understand how a lawyer cannot understand this was not a change of Prime Minister.

“The PH Government had lost. The Agong could not appoint Wan Azizah, the Deputy Prime Minister as acting Prime Minister. Like me, she did not have a majority after PH was overthrown by Bersatu leaving together with Azmin’s faction of PKR or Justice Party. Neither did the Cabinet,” he said.

Dr Mahathir also explained that while there was no legal provision for the position of interim prime minister, he had accepted the temporary designation as it would take time for the selection of a prime minister by 222 Dewan Rakyat MPs.

“The country needed a temporary head of Government. Once the members had chosen the new prime minister, my appointment would cease,” he said.

Dr Mahathir went on to say that the MPs however did not give a clear majority with PKR president Datuk Seri Anwar Ibrahim having 92 MPs’ backing and he himself having 62.

Tan Sri Muhyiddin Yassin was eventually announced on February 29, 2020 to be the next prime minister, and was sworn in on March 1 as Malaysia’s eighth prime minister.

News portal The Vibes had previously quoted Thomas as claiming in his book that the Yang di-Pertuan Agong had wanted Dr Wan Azizah as interim prime minister and that Dr Mahathir had put forward his own name for the post.

Among other things, Thomas reportedly questioned the dissolution of the Cabinet following Dr Mahathir’s resignation as prime minister only affected him and not the entire government.