On tiny island off Penang, students struggle with virtual lessons as internet line often on the blink

Nurifamanina Abdul Muiz gets help from her grandmother Fatimah Din as she does her online homework on Pulau Aman January 22, 2021. — Picture by Sayuti Zainudin
Follow us on Instagram, subscribe to our Telegram channel and browser alerts for the latest news you need to know.
By OPALYN MOK

SEBERANG PERAI, Jan 22 — School may have just started again this year but for some 30 home-bound students from primary to tertiary levels on Pulau Aman in Penang, the experience has become nothing short of torture due to the unstable internet connection.

The island, population 250, is roughly a 10-minute boat ride away from industrial Batu Kawan, but broadband connectivity has been an issue for some time.

“I sometimes have two online classes per day but it is hard to follow because it is so boring,” she said.

She said occasionally, she could not access her classes due to bad internet connection so she would miss classes.

She said usually, her mother would sit with her during classes as sometimes they had to move around to look for a spot with better internet connection.

“Sometimes we sit in front of our house as the line will be better outside,” she said.

So far, she said it is not easy to catch up with her studies due to the bad internet connection.

“I will ask my mother to help with my homework when I don’t understand,” she said.

Nurifamanina is a student of SK Pulau Aman, the only primary school on the island.

There are about 15 primary school students on the island, 12 are in secondary school, two in polytechnic and one in university.

One of the secondary school students, 16-year-old Nur Alea Soffiyyah Ahmad Hanif has to literally face the waves rushing up the shore to get stable internet connection.

“Sometimes it’s hard to get connection at home so I have to go to Hujung Tanjung and sit on the hammock there to join my online class,” she said.

It may sound idyllic, but to the student, it can also be distracting. 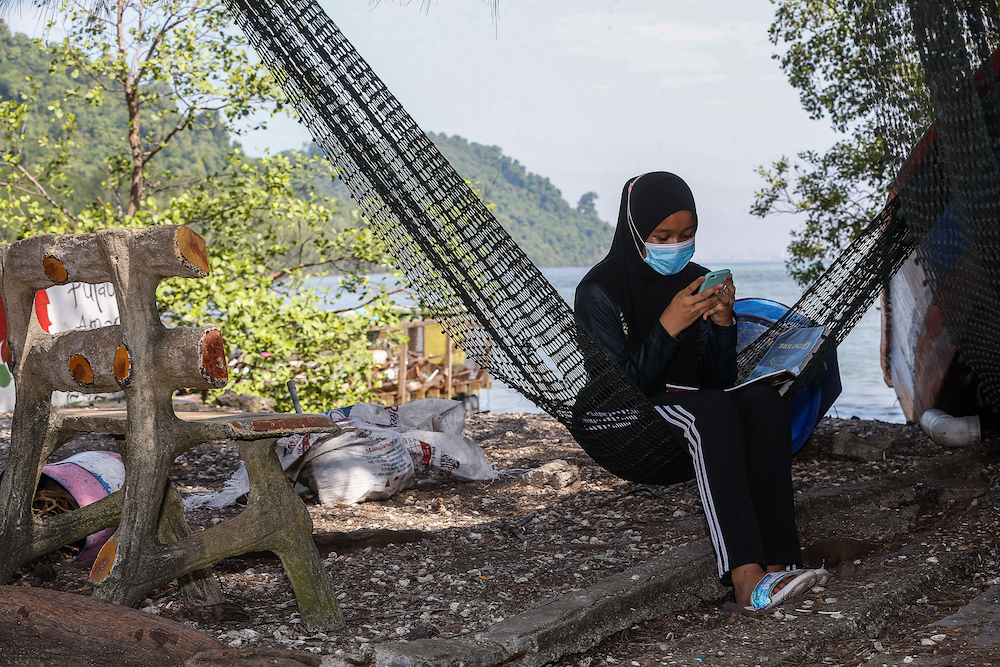 At other times, Nur Alea said she had to use her father’s phone as his phone has better connection.

Once in a while, she had to forego lessons for the day as she could not connect to the class on Google Meet at all.

“Usually the internet line is slower during daytime so I had to miss classes when I can’t connect at all but I will send a message to inform my teachers, usually they understand that Pulau Aman doesn’t have good internet connection,” she said.

She said using the online platform is in itself a hurdle to understanding her lessons.

“I find it easier to ask questions and understand my teachers in an actual classroom,” she said.

Fortunately, she has a schoolmate who lives near her on the island so sometimes they would sit together to attend their respective classes.

Both of them are students of Sekolah Menengah Sains Tun Syed Sheh Shahabudin in Bukit Mertajam.

Nur Alea and her friend, Hanis Syuda Razali, both stayed in the hostel of their school before the MCO. 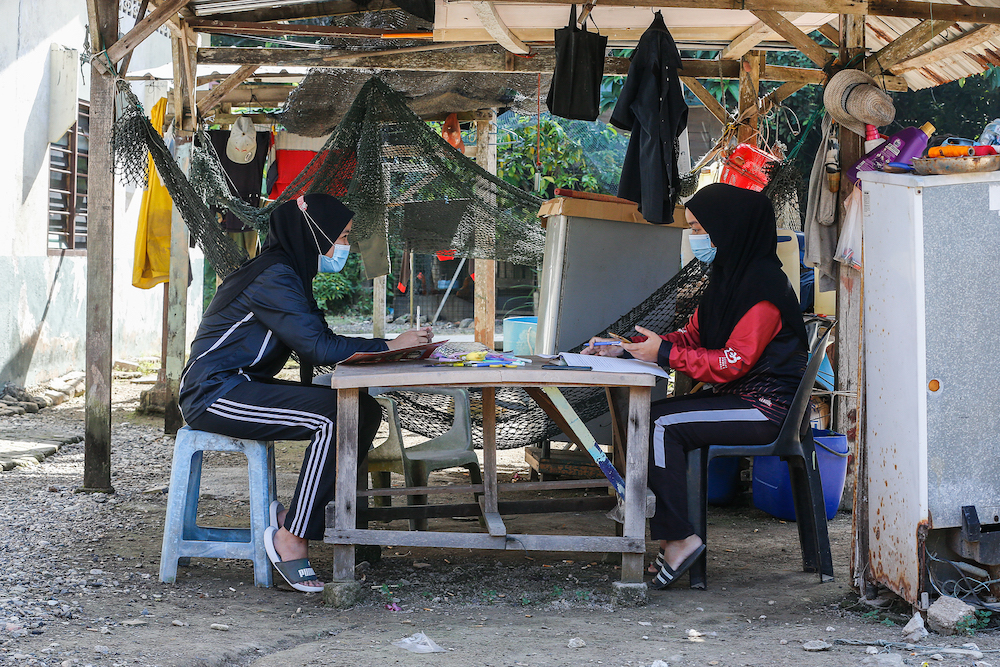 Like Nur Alea, Hanis too said she is struggling with studies due to the internet connection and online platform.

“I am worried about catching up as I will be sitting for SPM next year and even last year’s students are yet to sit for their SPM,” she said.

She said they will have to work extra hard to catch up with their studies despite the difficulties in accessing classes.

Hanis has to use two handphones when she logs into the online class.

“I will put one near the window for better connection to join the Google Meet classroom and use another phone to access the notes that my teacher shared,” she said.

Nur Alea does not have a computer to join online class while Hanis said her mother’s laptop was too old and couldn’t connect.

According to Village Community Management Council chairman Saibi Abd Majid, there is a telecommunications tower on the other side of the island, but coverage is still lacking for the tiny population.

“This issue has been around for many years, we only hope the telco companies will upgrade their facility here so that we can have better connection here,” he said.

He said most of the secondary school students studied in schools with hostels so they don’t have to travel to and fro every day.

“Now that they can’t go back to school, they are having issues due to the poor internet connection here,” he said.

Pulau Aman is a fishermen’s village that can only be accessed by boat from the Batu Musang Jetty in Batu Kawan. Most of the adults live on the island but work on the mainland.