Visitors walk past street art at a heritage site in George Town December 22, 2020. — Picture by KE Ooi
Follow us on Instagram, subscribe to our Telegram channel and browser alerts for the latest news you need to know.
By OPALYN MOK

GEORGE TOWN, Dec 24 — Outstation visitors have returned to Penang island and are packing the shops and other attractions in the heritage zone and beyond.

The roads into the city centre and around the turtle-shaped island have been crawling with cars these last two weekends since the conditional movement control order (CMCO) was lifted, but the locals aren’t complaining this time, not after their incomes nosedived after the pandemic kept both international and domestic tourists away.

“We are expecting to see more visitors over the holiday weekends,” Allen Tan, managing director of The Habitat on Penang Hill, told Malay Mail this week.

Visitors to the nature reserve offering a lush educational rainforest experience, jumped from below 50 a day during the CMCO to over 200 these days.

Tan said The Habitat has received a steady number of bookings since the CMCO was lifted, so much so that management had to inform some visitors that some of the packages on offer had a cap on the number of participants allowed, in compliance with Covid-19 rules.

“We will continue to ensure we maintain a physical distance and we put in place strict SOPs to protect our visitors and our staff,” he said.

Similarly, visitors to Penang Hill, which offers a bird’s eye view of the entire island and the Straits of Malacca below, have increased to more than 3,000 a day during weekends. Prior to the CMCO, the numbers were well below 1,500 a day.

Ch’ng Huck Theng, chairman of the Association of Tourist Attractions in Penang (Atap), is relieved at the new wave of visitors to the state this Christmas and year-end holidays.

He said the tourism industry suffered a massive drop in business as they relied heavily on visitors, both domestic and international, since the start of the pandemic.

Things started to pick up again in August and September, he said, but the growth was brought to a halt in October and November due to the CMCO.

“Once there is a CMCO in other states and people can’t travel domestically, our industry will suffer,” he said.

Now that people can once again cross state borders, Ch’ng is confident they will be making a beeline for Penang.

“Penang has always been a number one destination for domestic visitors so we expect to see some growth in numbers during the year end,” he said.

Ch’ng, who is also executive director of Ghee Hiang, a famous maker of traditional biscuits and sesame oil in Penang, said its biscuits were selling very well after the CMCO.

“We saw a drop in business of 70 per cent during the CMCO but it has picked up. We almost sold out our biscuits over the weekend,” he said.

Moving forward, he expects business will improve with more people choosing Penang as a destination for their break during the festive season.

“Our other Atap members are also seeing an increase in visitors, one of them, Entopia by The Butterfly Farm, recorded more than 300 visitors per day,” he said.

He said many of the Atap members had recorded zero revenue during the MCO and had suffered financially to stay afloat.

“Our hope now is that visitors will be vigilant and responsible to follow the SOPs and to stay home if they are not feeling well, we have to be extra careful not to spread more Covid-19 cases that could lead to another lockdown,” he said. 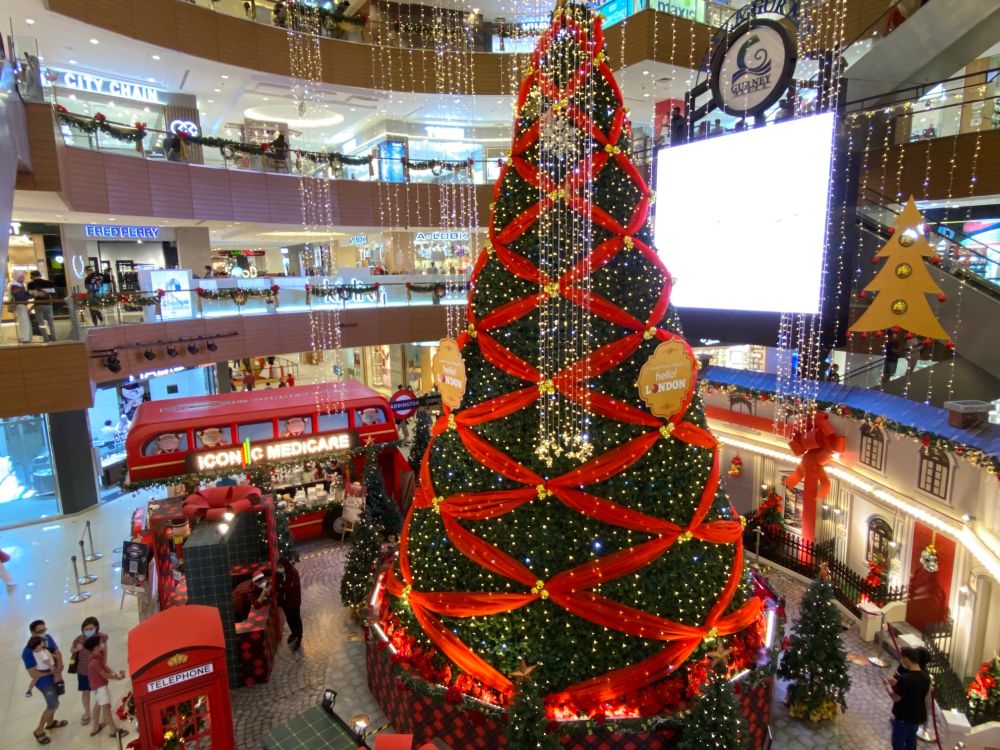 Patrons are pictured at the Gurney Plaza shopping mall in Penang December 22, 2020. — Picture by KE Ooi

The last two weekends have also proven to be good for retailers with increased foot traffic in the shopping malls here.

The mall managements have been inspired and come up with ways to lure shoppers to spend and make the cash registers sing again this festive season.

Gurney Plaza has launched a “Hello! London” shop-and-win contest for its first 120 shoppers.

According to a Gurney Plaza representative, the number of visitors to the mall is back to pre-Covid numbers.

“We continue to remind our visitors of the strict SOPs and ensure all shoppers adhere to it to ensure the safety of everyone,” she said.

The Christmas cheeriness seems to have spread next door to the upscale Gurney Paragon as well. A spokesman for the mall said foot traffic has risen at least 50 per cent compared to during the CMCO.

Not to be outdone, Gurney Paragon has launched its own Christmas programme, themed “It’s The Season of Giving” to encourage shoppers to do their bit for charity by donating a minimum of RM10 at the Joy of Giving donation point at the Concierge at Level One of the mall.

Donors get to unlock a decorative bird house located at the atrium of the mall to retrieve a Thank You card drawn by underprivileged children and other mystery gifts.

The Penang government has also launched a “Experience it all in Penang, responsibly” campaign to draw in more visitors to the state.

The state has set up a website to feature special deals and packages especially for visitors.