A picture shared by a resident from the apartment shows the damage brought about by the landslide on Thursday night.
Follow us on Instagram, subscribe to our Telegram channel and browser alerts for the latest news you need to know.
By YISWAREE PALANSAMY

KUALA LUMPUR, Oct 6 — Residents of an apartment in Seputeh are demanding answers, following a second landslide in the area which has displaced them since October 2, after their homes were sealed off for safety reasons.

A spokesman from the apartment blamed the incident on a neighbouring Buddhist temple which she alleged was the source of the residents’ predicament.

The spokesman said that her apartment management had been liaising with the temple’s management for 10 years, to fix the soil erosion problem.

“Essentially, we are neighbours with Thean Hou Temple which is on the hill. Landslides happened from their land into our land. That is what happened.

“Right now, the police are actually at the location, and the whole building has been sealed off. We have been shut out as it is unsafe. None of us can go back to our houses. We were given 30 minutes to take our things after being asked to evacuate the night before,” a resident who only wanted to be identified as Nisha, told Malay Mail when contacted.

Nisha said that the temple had also wanted to build a multi-storey car park, a plan which was allegedly rejected by Kuala Lumpur City Council (DBKL), and after several discussions, claimed that resolution of the matter was left to the residents and temple.

“It was basically closed as a private matter, so settle it between your neighbours. If your neighbours consent, you can go ahead and do so,” she added.

Nisha claimed that the temple management had then asked the residents to allow them to build their multi-storey car park, and in exchange, would fix the land erosion issue.

“This pretty much shows they acknowledged a problem, but used it to get approval for a car park, and when they didn’t, they tried to use it as leverage with us: We’ll fix it if you let us build.”

She said that the first landslide happened around two to three years ago.

“There have always been warning signs. Trees have fallen. Every time it rains, our entire garden floods because the water has nowhere to go. It has been an issue. We can’t even fix our garden. There is no point, right? If we can’t fix the soil,” she lamented.

Nisha said that the residents are now forced to stay in hotels and with relatives while the problem is sorted out.

Another resident from the apartment said there were signs of soil movement 10 years ago.

“I have the documents. I took pictures and I indicated that there were fallen trees on the hill slope, which did not look right. We sent them to Thean Hou Temple, and at that time already, whenever it rained, we could see water seeping into our car parks,” the resident who only identified himself as Raymond said, adding that the situation grew worse progressively.

The resident said that photos and videos have been sent to the temple management repeatedly, adding that the latter, however, made no effort to fix the problem with its land. 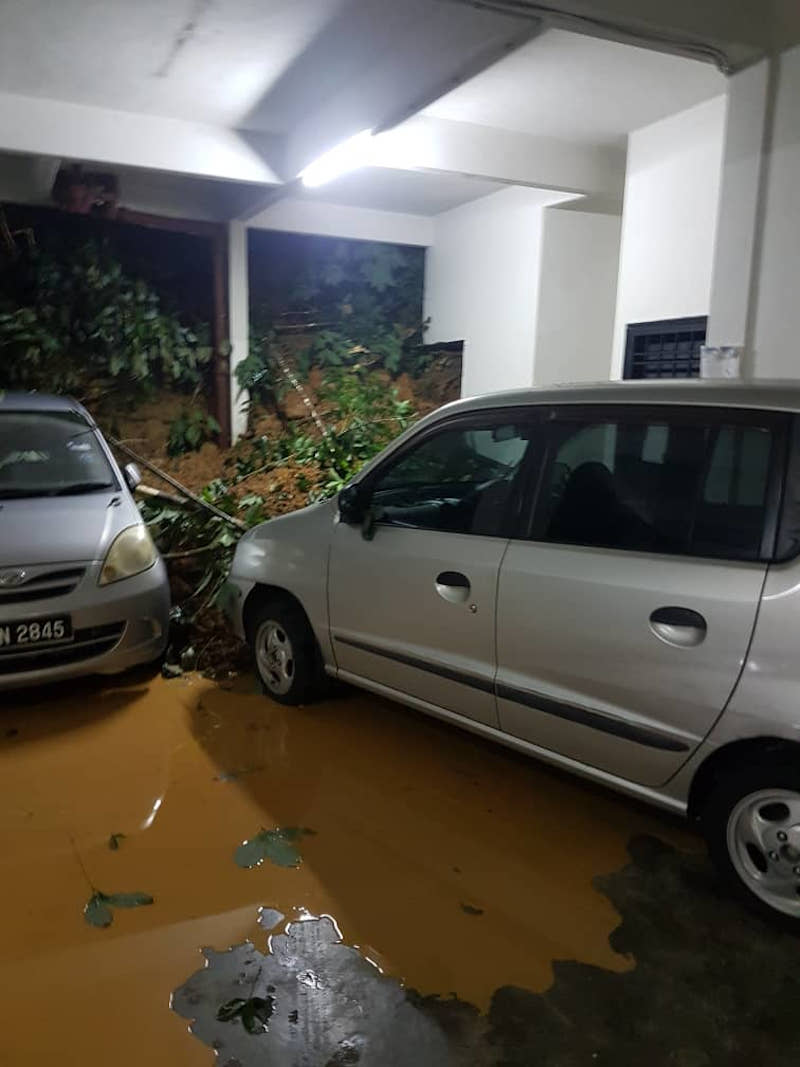 He said a “mini landslide” occurred in 2017, when a tree fell and hit the apartment building.

“After that, you could see a deep hole in the land next to us, and this was brought to their attention. They sent people over to assess the situation, but didn’t do anything,” Raymond said, adding that only the building’s damaged awning was replaced.

“As far as we know, they also engaged consultants to check the soil, but they came back, and said the same thing: Let us build a seven-storey car park on the slope and we will fix your problem.”

The resident also accused the temple management of affixing his letter of complaint to them, on the soil erosion problem, to their own letter to DBKL, seeking approval for the car park.

“That completely does not make sense, does it? Already there is soil erosion, it shows that the soil is unstable and you still want to build, not on flat land but a hill slope?

“Do they need a human life to be lost before they take the necessary action to rectify the hill slope?” Raymond questioned.

Last week, Bernama reported that 11 occupants from the low-density, three-storey apartment in Persiaran Syed Putra were affected after the embankment near their residence collapsed following a heavy downpour.

The report quoted a Kuala Lumpur Fire Operations Centre representative as saying 17 firemen from the Hang Tuah and Seputeh fire and rescue stations were dispatched to the scene after receiving a distress call at around 10pm.

It said that the team noticed soil erosion at the embankment, affecting six apartment units.

In response, Thean Hou Temple said that the heavy downpour on October 1 had triggered the landslide on the hill to its left on Persiaran Endah, Off Jalan Syed Putra.

“The downslope movement occurred last night at about 9pm. It was not at the back hill of Thean Hou Temple as reported earlier in a Chinese newspaper. Landslide at the back hill was not detected,” the statement read, quoting an unnamed spokesman for the temple.

The anonymous spokesman said that land experts had informed the temple’s management that the best way to prevent the landslide is to erect protective rock or concrete blocks against erosion on the slope.

The spokesman then claimed that the construction of the multi-storey car park would be the best solution, and urged DBKL to approve the project, “for the sake of public interest”.

“As proposed by the experts earlier, the erection of the seven-storey car park together with the preventive landslide measure would help solve the current problem. DBKL is urged to approve the Thean Hou Temple reinforcement work as soon as possible for the sake of public interest.

“We will invite civil engineers to conduct a detailed study on the landslide area. If necessary, we will also invite geological engineers to assure that the geological factors regarding the location, design, construction, operation and maintenance of engineering works are recognised and accounted for,” the spokesman added.

Malay Mail has reached out to DBKL and is awaiting a response.