Over 9,000 arrested for MCO violation as of yesterday, says Ismail Sabri

Police and Armed Forces personnel conduct checks on vehicles during a roadblock on Jalan Pahang in Kuala Lumpur April 15, 2020. — Picture by Firdaus Latif
Follow us on Instagram, subscribe to our Telegram channel and browser alerts for the latest news you need to know.
By JERRY CHOONG

He said of the 612 people, 590 were remanded while 15 were subsequently released by the police.

“As of yesterday, the number of MCO violators arrested stands at 9,720 people,” Ismail said during his daily press conference.

The police set up 799 roadblocks nationwide yesterday and checked 545,182 vehicles.

The minister added that 59,690 spot checks were conducted nationwide

“The authorities also examined 6,907 premises yesterday to see if the MCO was being adhered to.

“As mentioned before, the government will no longer compromise with MCO violators. Stern action will be taken against them, so I hope the public will cooperate on this,” Ismail said.

Similarly, public sanitation works under the Housing and Local Government Ministry, which commenced on March 30, have since seen 1,871 operations in 99 zones nationwide, including in 26 red zones.

“As of yesterday, 170 sanitation operations were conducted and covering 75 zones in 13 states, including 34 areas in Johor, and 22 in Pahang where 99 government buildings, 62 public areas, 80 business centres and nine supermarkets were sanitised,” he said.

Yesterday also saw an additional Covid-19 quarantine centre added to the existing list, bringing the total number of centres to 177.

“A total of 14,536 individuals are undergoing the compulsory quarantine process. Approximately 157 expatriates returned from abroad yesterday and have since been quarantined,” Ismail said.

Separately, the minister was informed by several members of the press that they were told by the police at roadblocks that their official company letters authorising them to move about as part of their work were not valid.

“Most of the press usually do not face such problems. But we will discuss the matter with the police and resolve it,” Ismail said. 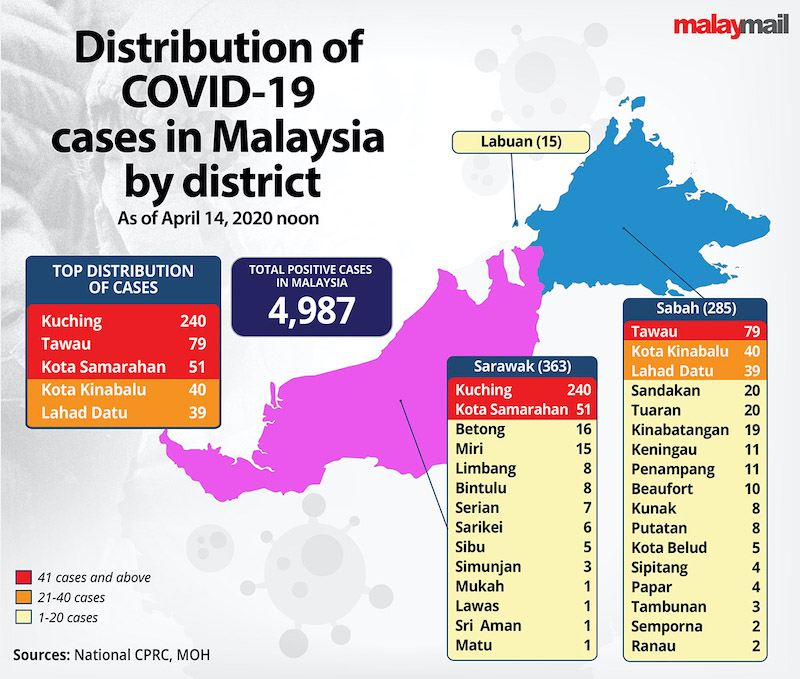