Why 'Islam' is on Malaysian Muslims' identity cards

Malaysian Muslims have 'Islam' printed prominently on their MyKads while non-Muslims only have their religious information recorded on the chip.— Picture by Shafwan Zaidon
Follow us on Instagram, subscribe to our Telegram channel and browser alerts for the latest news you need to know.
By IDA LIM

KUALA LUMPUR, Jan 28 — Last week, the Home Ministry once again reiterated its stance that it will not remove one's religious status on the MyKad.

But why do Malaysian Muslims have “Islam” printed prominently on their MyKads while non-Muslims only have their religious information recorded on the chip?

Why do Malaysians' identity cards even contain information on what faith they profess? Why does the government collect information about the religion of each individual Malaysian?

The short answer is because it’s the law. But the actual journey to where we are today may surprise you. (Stay with us, since much of the information below is really hard to get publicly.)

Here's Malay Mail's quick summary of everything you need to know about the law and history behind the government's keeping tabs on Malaysians' religious affiliations:

The National Registration Act 1959, which only has 11 short provisions, does not explicitly say what details should be shown on Malaysians’ identity cards.

But Section 6 of the law says the home minister may make regulations, including rules on how Malaysians’ identity cards will appear and what details they must display.

As such, the real details are instead in the National Registration Regulations 1990, which has 32 regulations and contains procedures such as what to do if you lose your identity card and how much has to be paid when applying for new or replacement identity cards.

While “Islam” on Malaysian Muslims’ identity cards feels like it has always been there, it was not the case even just a few decades ago.

On December 31, 1990, the first and original version of the National Registration Regulations 1990 came into effect, which among other things required Malaysians to provide two identical photographs of themselves and their thumbprints when applying for their identity cards.

In the original 1990 version of the regulations' Regulation 4(c), Malaysians were told to give only these details to the registration officer: full name, previous identity card number (if any), home address, race, place of birth, date of birth and gender, physical abnormalities if any, citizenship status and other details that the officer considers necessary for identification as well as documentary evidence to support such details.

It did not say Malaysians were required to provide details on their "religion" when applying for identity cards. 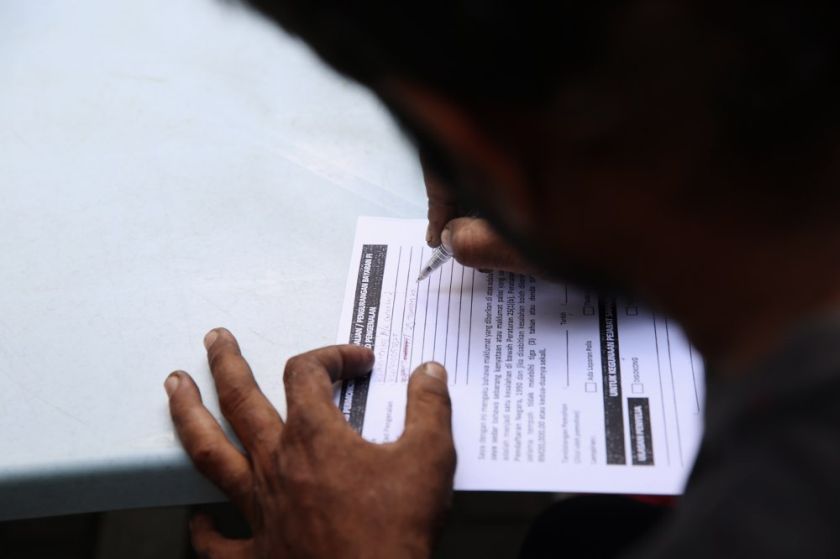 In 2000, the government made its first amendment to the 1990 version of the regulations, introducing new requirements for the application and appearance of identity cards. — Picture by Choo Choy May

3. So what happened and when?

For almost 10 years, the Malaysian government made no changes at all to the 1990 regulations governing the rules on what information was needed to register for identity cards and what would be printed on them.

In 2000, however, the government made its first amendment to the 1990 version of the regulations, introducing new requirements for the application and appearance of identity cards.

The amendments were made on February 4, 2000 by then-home minister, (then) Datuk Seri Abdullah Ahmad Badawi (who was also then deputy prime minister and would later go on to become prime minister a few years later).

In these, Malaysians applying for identity cards were now required under the new Regulation 4(c)(iva) to provide information on their "religion (only for Muslims)" or, in other words, to inform the registration officer of their religion if they are Muslims.

These also amended the First Schedule, introducing the new requirement for identity cards to print the detail on "religion (only for Muslims)". In other words, this is why Malaysian Muslims now have "Islam" printed on their identity cards.

These two new requirements made in year 2000 were only for Muslims, and were effectively backdated to take effect from October 1, 1999.

In the 2001 amendments made on July 26, 2001 by then-home minister Abdullah, the government changed the 2000 requirement of providing information on "his religion (only for Muslims)" to the new requirement of "religion", which effectively meant that Malaysians are now expressly required to give details on their religion when applying for identity cards regardless of whether they are Muslims or non-Muslims.

This new requirement came under the new regulation 4(cc), which came into effect from November 1, 2000 onwards.

So now you know when all these legal requirements came into place. (The government could have been collecting information on Malaysians’ religious affiliations since even before the 2000 and 2001 amendments, but those marked times when the law introduced express requirements for such information to be provided.)

In Malaysia, federal laws such as the National Registration Act here empower the relevant ministers to make regulations related to the main law.

Arguably this allows for greater flexibility and expediency as regulations do not have to be passed in Parliament to become law, unlike Acts that must be tabled, debated, approved and gazetted before they can be deployed.

The flipside is that Malaysians may not know the reasoning for policies enforced through regulations as these do not receive the same scrutiny as legislation.

So, there is no direct answer to why Islam was now required for identity documents, but there could be some hints or clues in the Home Ministry's press statement.

Althought that still does not explain why, the Home Ministry went on to cite the Federal Constitution's Article 3(1) that provides for Islam as the religion of the federation of Malaysia and for other religions to be practised in peace and harmony here.

The Home Ministry also said putting "Islam" on Muslims' identity cards is an important element to help enforce the Federal Constitution's Article 11(4) and Shariah laws. (Article 11(4) states that state laws (and federal laws when it comes to the federal territories of Kuala Lumpur, Labuan and Putrajaya) can control or restrict the spread of any religious belief among Muslims). 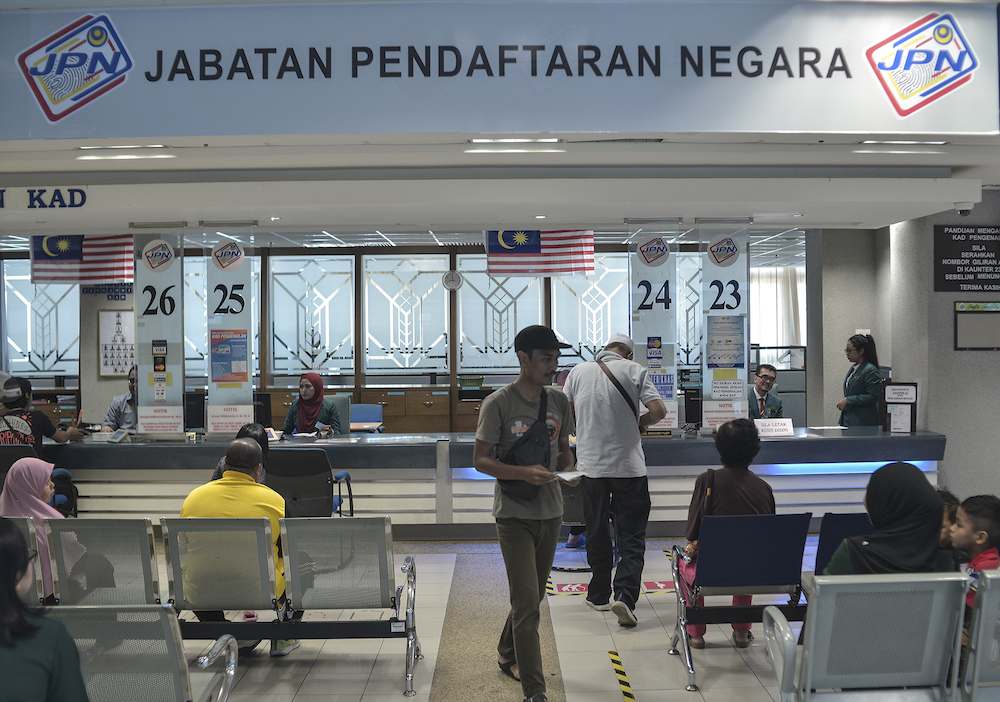 No examination of the history behind the regulations on Malaysians' identity cards would be complete without mentioning the landmark case of Lina Joy.

Based on the facts provided in the Federal Court’s May 30, 2007 judgments on the case, a Malay woman named Azlina Jailani had sought in early 1997 to change her name in her identity card to Lina Lelani, stating in her statutory declaration that she had renounced Islam for Christianity and intended to marry a Christian, but this application was rejected by the National Registration Department (NRD) in August 1997 without any reason given.

Finally on October 22, 1999, the NRD told her in a letter that it had approved her application to change her name in the identity card to Lina Joy, and asked her to apply for a new identity card to replace her current one.

She applied for the new identity card the same month in 1999, stating her religion as Christianity when filling up this application form.

She then received her new identity card with her new name Lina Joy — only to discover what she described as a “trick” by the NRD. This new identity card reflected her name change, but now carried the word “Islam” and also carried her original name Azlina Jailani on the reverse side of the card.

Unbeknownst to her as she was not notified by the NRD, the National Registration Regulations was amended in 2000 to require “Islam” be displayed on the identity cards of Muslims.

The regulation was applied retroactively and included Lina Joy’s application despite this being made in October 1999.

She was forced to make a third application in January 2000, this time seeking the removal of “Islam” and her original name from the identity card, but the NRD rejected this by saying that she needed to produce an order from the Shariah court regarding her renunciation of Islam.

She challenged this unsuccessfully at the High Court and Court of Appeal, before eventually losing in a 2-1 decision by a three-man panel at the Federal Court.

Among other things, the dissenting judge, Tan Sri Richard Malanjum, noted that the NRD had failed to act fairly when it could have at the very least told her of the impending amendment.

“In my view, there is therefore a reasonable suspicion that reg. 4, although formulated in 2000, was deliberately amended retrospectively to 1 October 1999 in order to target and to prejudice the third application of the appellant made on 23 October 1999,” he said, noting that the government did not challenge Lina’s claim of not being given notice that the regulations would be changed.

*Note: A previous edition of the story contained errors which has since been corrected.
Advertisement