Malaysia sends back 3,737 metric tonnes of plastic waste, to repatriate more this year

Minister of Energy, Science, Technology, Environment and Climate Change Yeoh Bee Yin (centre) during a site visit to the North Butterworth Container Terminal in Penang January 20, 2020. — Pictures by Sayuti Zainudin
Follow us on Instagram, subscribe to our Telegram channel and browser alerts for the latest news you need to know.
By OPALYN MOK

“The repatriation of the containers did not incur any costs on us which is unprecedented as the importers and shipping companies paid for the costs,” she said during a press conference after visiting the North Butterworth Container Terminal (NBCT) at Penang Port here.

Yeo said there are 110 more containers, from all three ports in Klang, Penang and Sarawak, that will be sent back to nine countries by the middle of this year.

“A total 60 out of the 110 are from the US and we are working closely with the US government and agencies on the process,” she said.

She said each container weighs about 20 metric tonnes so the estimated weight of the plastic waste to be sent back are around 2,200 metric tonnes. 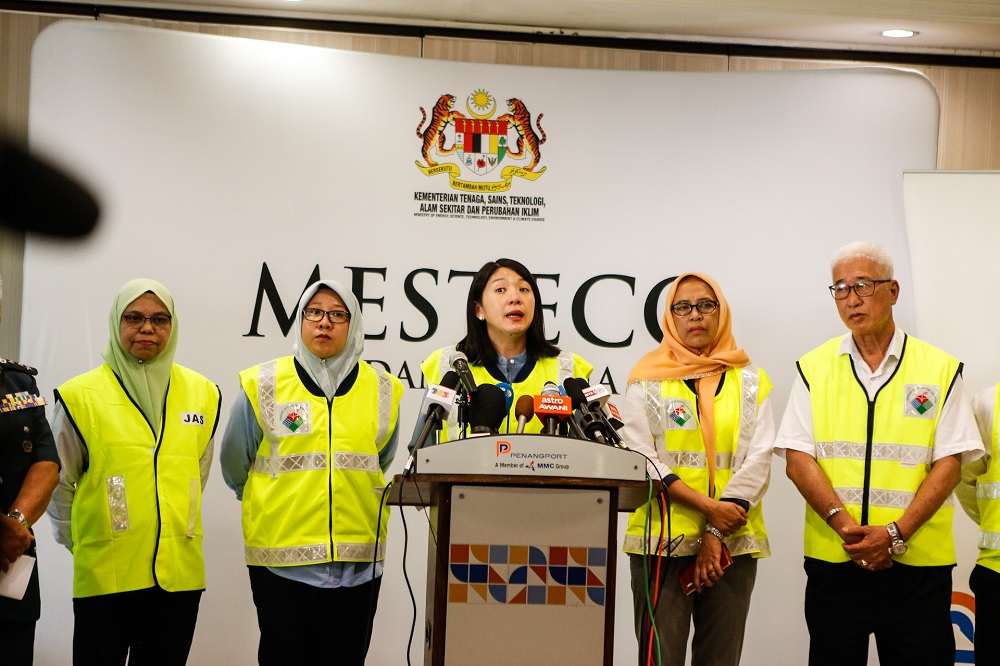 “We will continue to take enforcement action to stop the import of plastic waste and close down illegal plastic waste factories here, we want the world to know that Malaysia is not a plastic waste dumping ground,” she said.

She said a new national action plan on illegal plastic waste importation will be launched next month so that all agencies involved will have proper enforcement procedures to follow.

“A total 218 illegal plastic waste factories were closed down and enforcement actions will continue to close down more illegal factories,” she said.

She said even if the factories were to reopen in a different state, the enforcement team will close it down again.

“We will act on any reports of these factories operating illegally in any states in Malaysia so we call on the public to be our eyes to report to us,” she said.