Datuk Seri Wan Ahmad Wan Omar is seen at the Kuala Lumpur High Court December 11, 2019. — Picture by Firdaus Latif
Follow us on Instagram, subscribe to our Telegram channel and browser alerts for the latest news you need to know.
By IDA LIM

This 2015 incident occurred when Wan Ahmad had been a special officer to the deputy prime minister. Wan Ahmad retired from the EC in November 2013.

Following his retirement from the EC, Wan Ahmad had served as special officer to Tan Sri Muhyiddin Yassin who was the deputy prime minister from January 2014, before continuing on to be the special officer of Zahid who replaced Muhyiddin until July 31, 2018.

How the company was born

“In early 2015, I was ordered by Tan Sri Muhyiddin Muhammad Yassin that was the deputy prime minister of Malaysia then to form the company TS Consultancy & Resources.

“TS Consultancy & Resources was formed to help Barisan Nasional and the government that was ruling then in the matters of registering voters in certain areas,” Wan Ahmad told the court in Zahid’s corruption trial.

He said the special meeting was chaired by Muhyiddin, and were attended by then Umno secretary-general Datuk Seri Tengku Adnan Tengku Mansor, Zahid, several other Umno leaders, Wan Ahmad himself, and key company official Sabri Said. 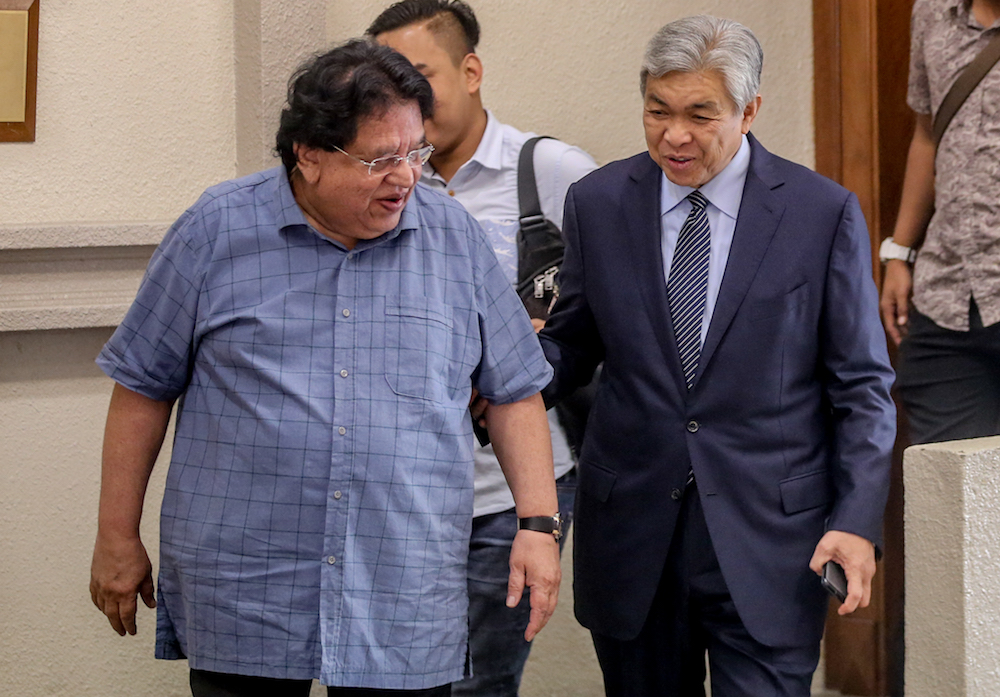 Wan Ahmad said that TS Consultancy & Resources started facing problems in obtaining funds for the company’s management and work following the July 2015 Cabinet reshuffle, in which Muhyiddin was dropped and replaced by Zahid.

Wan Ahmad said he told Zahid of the company’s financial situation during the first official briefing on August 20, 2015 about the company’s work to Zahid as the new deputy prime minister.

“I had informed Datuk Seri Ahmad Zahid Hamidi that TS Consultancy & Resources was facing financial limitations as the budget allocation for TS was not received from Umno headquarters as it should be and that problem was affecting the work of TS from being carried out smoothly,” he said.

“After listening to my complaint, Datuk Seri Ahmad Zahid Hamidi had called his special officer Major Mazlina Mazlan @ Ramly and ordered her to prepare a cheque for RM100,000.

“I saw Datuk Seri Ahmad Zahid Hamidi putting down his signature on the cheque in front of me,” Wan Ahmad said.

Wan Ahmad said that Zahid’s special officer Mazlina had contacted him several days after the memo to inform him that a cheque was ready for the company, adding that she passed him the cheque at his office.

Wan Ahmad said RM360,000 from the two cheques was spent solely on the operating costs for the company in the course of its voter registration work.

Wan Ahmad also said the company did not carry out any other work, besides registering eligible Malaysians as voters and briefings on elections.

Wan Ahmad is the 18th prosecution witness in Zahid’s trial, where the latter is facing 47 charges involving allegations of criminal breach of trust, receiving bribes and money-laundering.

The prosecution had previously said it will prove that Zahid had misappropriated RM31 million from Yayasan Akalbudi, with the RM31 million allegedly not spent for the benefit of the poor at all but for other expenses including credit card bills, insurance and road tax for privately-owned vehicles.

The court has previously heard that Zahid is the sole signatory of Yayasan Akalbudi, an organisation aimed at helping the poor and needy.