KUALA LUMPUR, Oct 28 — PAS is likely to emerge unhurt by the scandal that has erupted around its former deputy president Datuk Nasharudin Mat Isa, who will likely be seen as yet another victim of a vindictive government bent on crucifying anyone seen close to the previous regime, political analysts said.

What would fuel this narrative is simple, they said: Nasharudin’s accusers have been inconsistent.

Last week, the former MP and protege of PAS president Datuk Seri Abdul Hadi Awang was charged with 33 counts of corruption and criminal breach of trust relating to a sum of RM4 million, alleged to have been splurged on personal items that included generous gifts to his children.

But two years prior to the court action, his accusers had built a narrative that linked him instead to money siphoned from 1Malaysia Development Berhad. Yet, not one single charge read before him in Wednesday’s proceeding mentioned anything about the troubled fund.

“It is funny how the case was discussed on media earlier than the court. I found this issue had been constructed to influence the public,” said Kartini Aboo Talib, political analyst and deputy head of Universiti Kebangsaan Malaysia’s Institute of Ethnic Studies.

“The case built against him on the media before was that he had everything to do with 1MDB and the RM90 million supposedly given to PAS by former prime minister Datuk Seri Najib Razak,” she added.

“Ironically, the charges against him at the court now is criminal breach of trust for using the Global Movement of Moderates Foundation’s (GMMF) fund for personal use.”

Under the Amla, the 57-year-old former MP, once deemed the protege of PAS president Datuk Seri Abdul Hadi Awang, is accused of indirect involvement in money laundering activities involving RM302,069.60.

The rest were for criminal breach of trust involving the Nassar Foundation and the defunct GMMF, amounting to RM3,721,683.80.

Nasharudin was the chairman and chief executive officer of the respective organisations.

From the charge sheets alone, it was unclear if the funds Nasharudin was accused of pocketing had been diverted from 1MDB, even if some of the allegations appeared incriminating.

And PAS leaders quickly responded by proclaiming to have been exonerated from claims that the party was in cahoots with the 1MDB heist.

Its vice president Datuk Mohd Amar Nik Abdullah told a news portal on Wednesday that the corruption charges against Nasharudin were clearly unrelated to PAS, despite confirming the latter’s membership amid confusion about its status.

Nasharudin was reportedly expelled from the party in 2013 after his sacking from the advisory Syura Council for disobedience. The former PAS deputy president was critical of the party’s ties with PKR and DAP when they were still allies in Pakatan Rakyat, the opposition bloc at the time.

Datuk Mohamad Abu Bakar, political analyst with University of Malaya, said the murky status of Nasharudin’s membership would give PAS supporters grounds to doubt attempts to link Nasharudin’s corruption scandal to the party.

Furthermore, Nasharudin is but one of many PAS personalities. If the allegation is to cause any significant dent on the party’s standing, Mohamad said more leaders would have to be charged.

Until then, PAS voters are likely to brush the fiasco aside as a mere blip, or at least the fabricated work of political assailants. The offences allegedly took place between 2015 and 2018.

“Nasharudin is only one figure and no longer seen as someone who really represents the party, since he has no post whatsoever,” Mohamad told Malay Mail.

“Unless more leaders are charged, then we might have a different story.”

Nasharudin was to detractors the nexus that tied PAS with the financial misappropriation that took place at 1MDB.

In 2017, former PKR vice-president Rafizi Ramli claimed that Nasharudin had received funds directly from Najib believed to be from 1MDB. This allegation was based on a tip he received from a Malaysian Anti-Corruption Commission official, detailed in a statutory declaration.

The money, which Rafizi claimed came from a subsidiary of the investment fund, was said to have been transferred to the former prime minister’s accounts and was later channelled to Nasharudin’s bank account.

That same year, PH leaders alleged Najib, as then Umno president, had gifted PAS RM90 million as the two parties got closer. PAS leaders have denied the allegation until today. 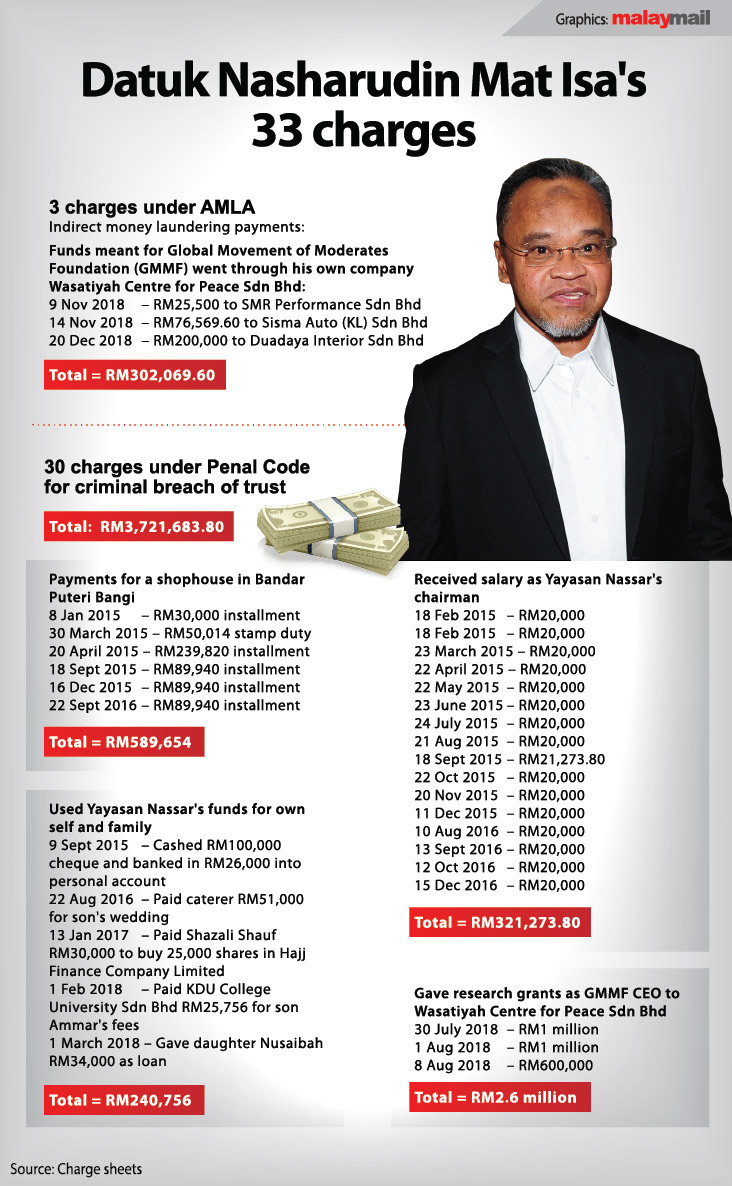