This aerial picture shows smouldering peatland (left) after a fire swept through the area and stopped moving further due to a road in Kampar, Riau province September 13, 2019. — AFP pic
Follow us on Instagram, subscribe to our Telegram channel and browser alerts for the latest news you need to know.
By IDA LIM

KUALA LUMPUR, Sept 13 — Jakarta has sealed land belonging to the Indonesian subsidiary of a Malaysian plantation firm on suspicion of deliberate open burning, in an apparent bid to prove its insistence that Malaysia was also partly culpable for the haze affecting the region.

“We have already checked the business which burned the forest is from Malaysia. Already sealed (September) 11,” she was quoted as telling media outlet CNNIndonesia.com yesterday. 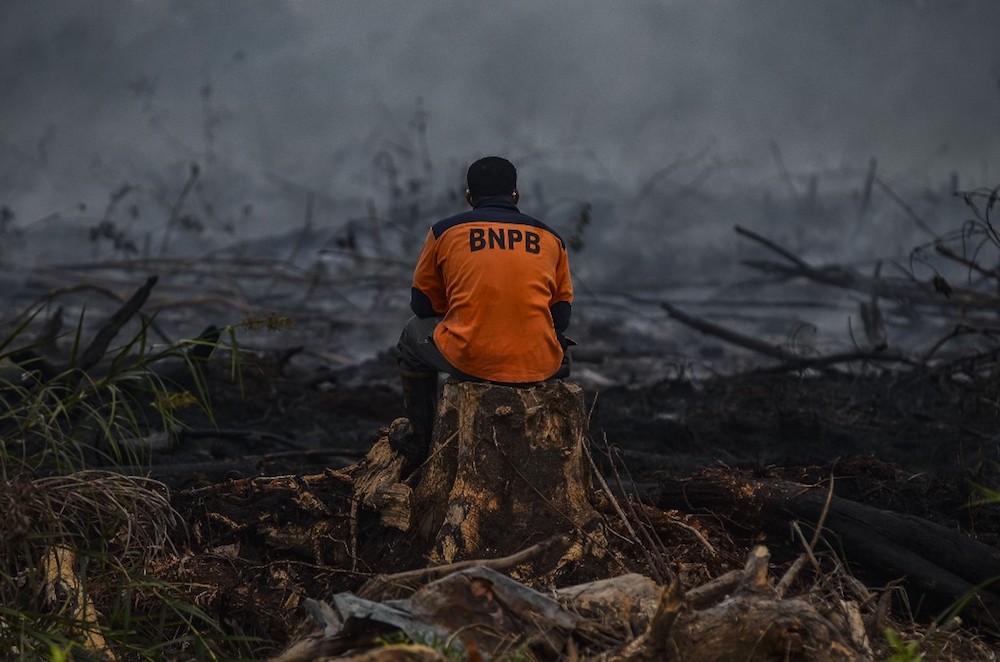 PT Adei Plantation and Industry’s land which was sealed off on suspected burning of forest and land is located in the Pelalawan regency in Riau on the island of Sumatra.

Forest fires and burning of land in Indonesia’s Sumatra and Kalimantan have been pinpointed by Malaysia as the source of haze plaguing the latter, with Malaysia even forced to close off some schools due to “very unhealthy” air pollution levels that surpassed the 200 mark on its air pollutant index — one category below “hazardous”.

Sumatra is separated from peninsula Malaysia by the Straits of Malacca, while Kalimantan shares land borders with Sarawak and Sabah. 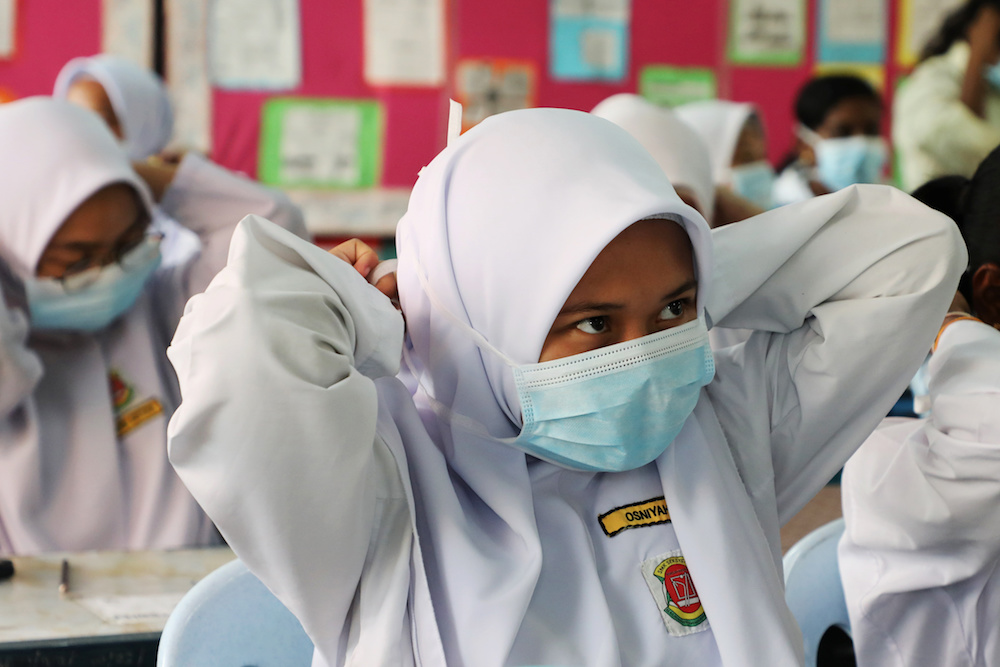 Students cover their faces with masks at a school in Puchong as haze shrouds Kuala Lumpur September 12, 2019. — Reuters pic

Siti reportedly said the Indonesian ministry is also currently carrying out checks and collecting data on other companies originating from Malaysia and Singapore which have their land on fire.

CNN Indonesia reported Siti defending her previous claim that the haze affecting Kuala Lumpur did not only come from Kalimantan, but purportedly also from Sarawak and peninsula Malaysia.

She claimed that she was explaining satellite data from September 3 to September 8, urging her Malaysian counterpart Yeo Bee Yin to be “objective” and “sequential” in analysis data on hotspots within Indonesia and Malaysia and hoping not to prolong the argument. 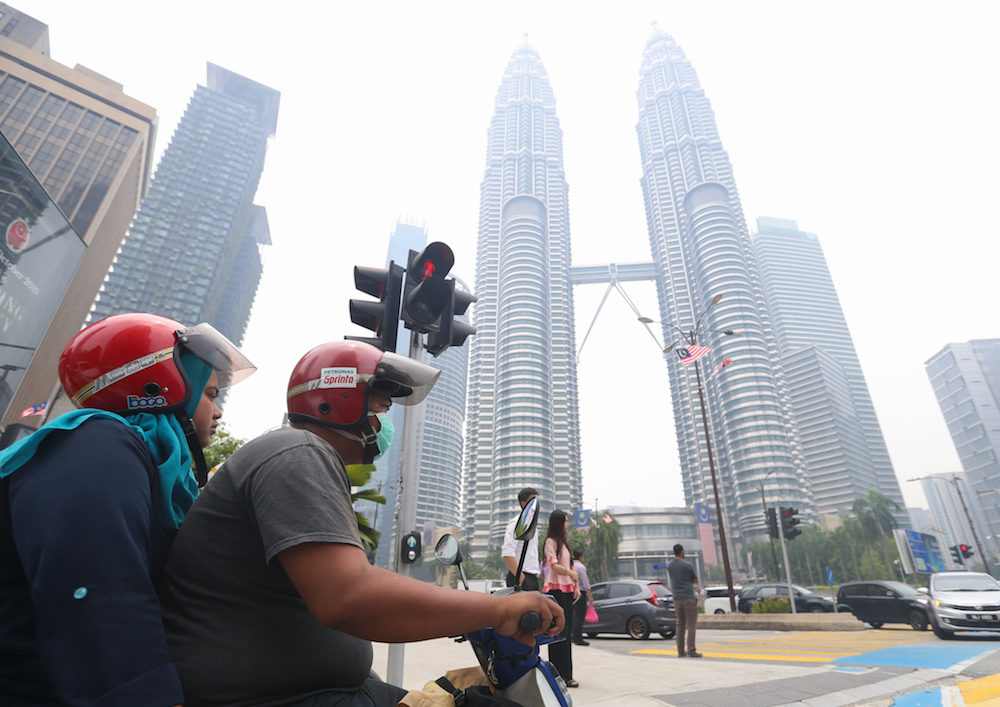 A motorist wears a mask as he travels past the Petronas Twin Towers shrouded in haze in Kuala Lumpur September 12, 2019. — Picture by Firdaus Latif

Siti had previously accused Malaysia of covering up information on the haze situation, but her denial of Indonesia’s role was met with a rebuttal by Yeo using data from the Asean Specialised Meteorological Centre (ASMC).

Yeo had said ASMC data on the wind direction in the region showed it was illogical to claim haze had travelled from Sarawak, while noting that the ASMC data recorded hundreds of hotspots in Kalimantan and Sumatra as opposed to just seven then in Malaysia.

According to CNN Indonesia, Siti said the Indonesia government has been working since January to tackle the problem of burning of forests and land, with 46 helicopters currently deployed to fight the fires and with man-made rain also carried out in west Kalimantan. 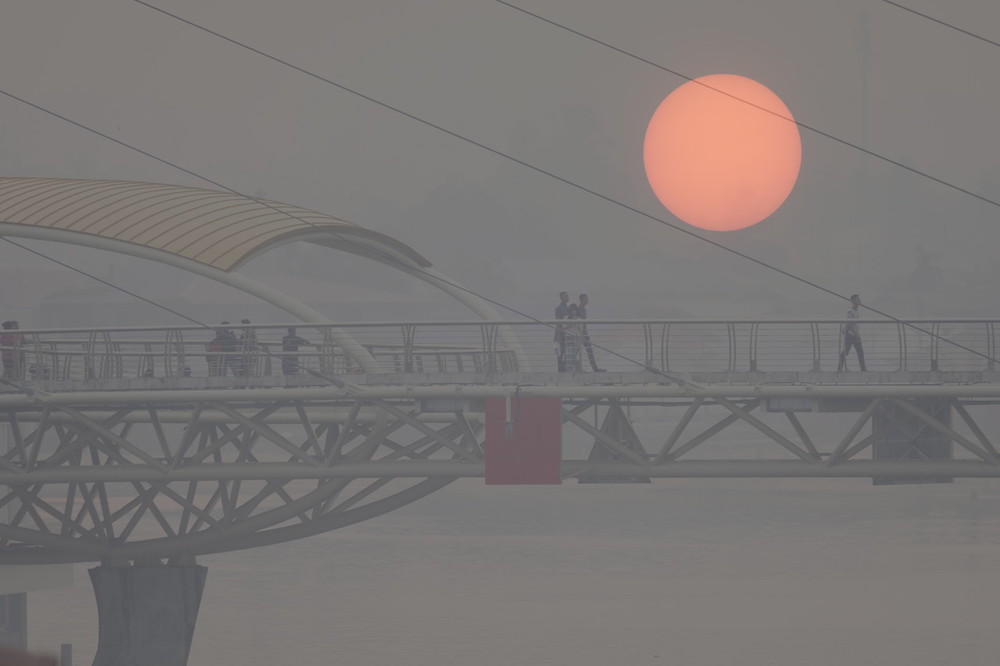 In a separate report by newswire Reuters today, the Indonesian government said there were four Malaysian companies out of at least 30 companies whose palm oil plantations in Indonesia were sealed off due to fires.

Yeo, who is minister of energy, science, technology, environment and climate change, said action should be taken against those behind the fires and stressed the urgency of putting out the fires.

“Indonesia should take action against the perpetrators of the forest fires, regardless of who they are and without fear or favour, according to the law of the land. Most importantly, the forest fires must be extinguished as soon as possible,” she was quoted saying by Reuters.