Prasarana Malaysia Berhad said January’s passenger traffic for the MRT surged 40 per cent compared to the same period last year, while ridership for all Rapid Rail services rose 13 per cent. — Picture by Yusof Mat Isa
Follow us on Instagram, subscribe to our Telegram channel and browser alerts for the latest news you need to know.
By By Syed Jaymal Zahiid

Although the volume of riders is still below that needed to recoup cost, public transport enthusiasts will likely view the increase positively.

“We can say that for MRT ridership alone, we saw an increase of 40 per cent… year-on-year,” Prasarana Malaysia Berhad said in an email to Malay Mail.

It did not provide the exact figures.

Passenger volume on the MRT SBK line, which can service up to half a million riders daily, averaged at just 140,000 daily, based on the reported ridership numbers over the past two years.

But even with 200,000 daily passengers, the MRT SBK line remains largely underused. 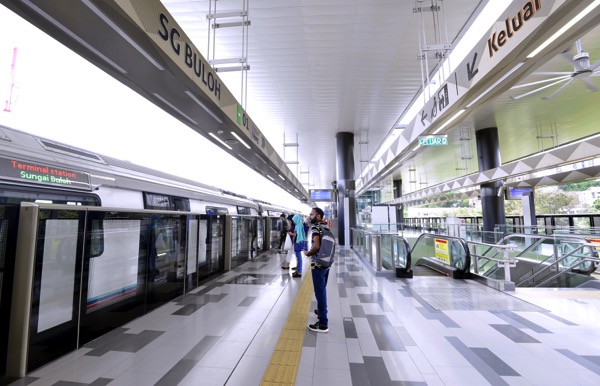 Passenger volume on the MRT SBK line averaged at just 140,000 daily, based on the reported ridership numbers over the past two years. — Pictures by Ham Abu Bakar

Critics have touted cost as a major hurdle to public use of rail services. Pakatan Harapan leaders like DAP’s Ong Kian Ming, now a deputy minister, argued MRT and LRT fares are too expensive for most people.

The subsidised travel passes the PH government introduced on January 1 this year was meant to address that.

At just RM100 monthly, subscribers get all-access passes for all Rapid Rail and bus services. The RM50 pass, intended for poorer households, can only be used for buses.

PH leaders were confident that the initiative would drive up public transport use.

Prasarana said, to date, 100,800 have bought the passes, roughly a tenth of public transport users in Greater Kuala Lumpur/Klang Valley.

According to the Land Public Transport Commission, around 1.2 million used buses or rail services daily in 2017.

*A previous version of this story contained an error which has since been corrected.