Nizam Bashir (left), one of the lawyers for a Johor Muslim couple fighting to remove their son's ‘bin Abdullah’ illegitimacy tag, said the de novo hearing or fresh hearing will be heard on October 18. — Picture by Miera Zulyana
Follow us on Instagram, subscribe to our Telegram channel and browser alerts for the latest news you need to know.
By By Ida Lim

KUALA LUMPUR, July 27 ― The Federal Court will have a fresh hearing for the high-profile “bin Abdullah” case with a panel of seven judges, even though the appeal hearing had previously concluded and is pending a judgment.

Nizam Bashir, one of the lawyers for a Johor Muslim couple fighting to remove their son's “bin Abdullah” illegitimacy tag, said the de novo hearing or fresh hearing will be heard on October 18.

“We were just told the matter will be reheard by a panel of seven judges, because it's a public interest matter,” he told Malay Mail when contacted today after a case management.

He said it was not specified whether the panel of seven judges will be completely different from the previous panel, but said the there are sufficient judges currently for a fresh seven-man panel at the Federal Court.

The Federal Court had previously on February 7 completed its hearing on the case, and a five-man panel chaired by then Chief Justice Tun Md Raus Sharif had said the decision would be delivered at a date to be fixed later.

Raus earlier this month stepped down and was replaced on July 11 by Tan Sri Richard Malanjum as Chief Justice of Malaysia.

Malanjum had on July 12 announced various reforms for the Federal Court, including having cases of constitutional importance heard by a panel of nine judges, namely the top four in the judiciary and five other Federal Court judges selected via balloting.

When asked about the seven-judge panel for his clients' case, Nizam said it would be positive.

“I look at it positively because it highlights the importance of this issue.

“And we will have the benefit of judicial wisdom of seven senior judges including the top four judges, and I think that bodes well for the consideration that will be given by judges in this matter,” he said. 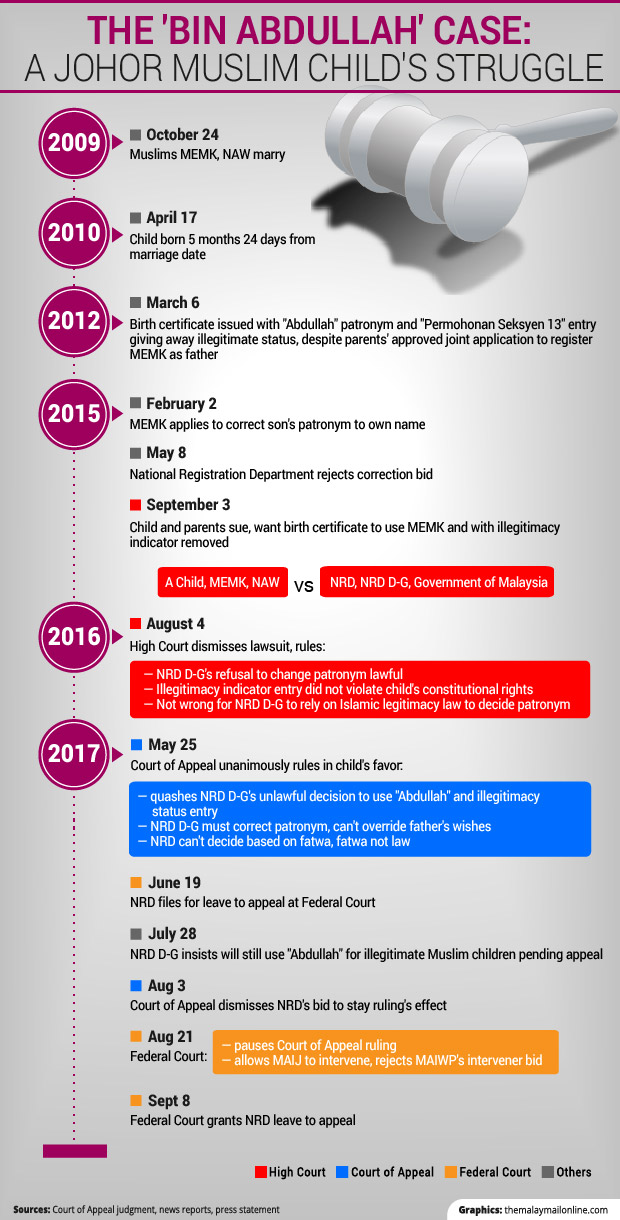 Nizam's clients ― a Johor Muslim couple given the initials of M.E.M.K and N.A.W and their child ― had on September 3, 2015 filed the lawsuit against the National Registration Department (NRD), the NRD director-general and the government of Malaysia.

The trio had sought for a change of the child's birth certificate details to use the father's name instead of the “bin Abdullah” patronym.

The High Court had on August 4, 2016 dismissed the Johor Muslim couple’s lawsuit, ruling that it was lawful for the NRD director-general to refuse to change the “bin Abdullah” patronym in the child’s birth certificate.

The Court of Appeal had on May 25, 2017 unanimously delivered a landmark ruling that quashed the NRD director-general’s decision to use the “bin Abdullah” patronym, also ordering him to correct the patronym in the birth certificate as he cannot override the father’s wishes to have his name used.

But the NRD had appealed to the Federal Court against the Johor Muslim couple's successful bid to remove the "bin Abdullah" name for their child in official records.

This case may have wide-ranging impact for Muslim families who do not want their children that are born out of wedlock to bear the stigma with the easily recognisable "bin Abdullah" or "binti Abdullah" tag.

The Johor Islamic Religious Council is an intervener in the lawsuit. 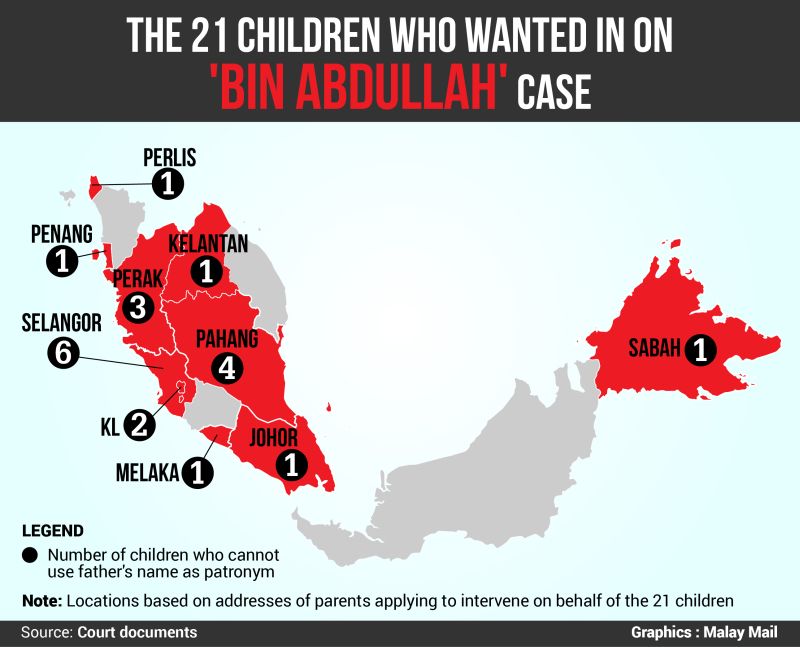