Zulkifli Che Yong, the lawyer for Ezra in the Shariah case, confirmed that there was a hearing today for his client’s application to stay the Shariah trial until the conclusion of a separate case at the civil courts.

Anyone convicted under Section 16(1) — which makes it an offence to print, publish, disseminate, or possessing for sale or for dissemination books “contrary to Islamic law” — is liable to a maximum RM3,000 fine or maximum two-year jail or both. 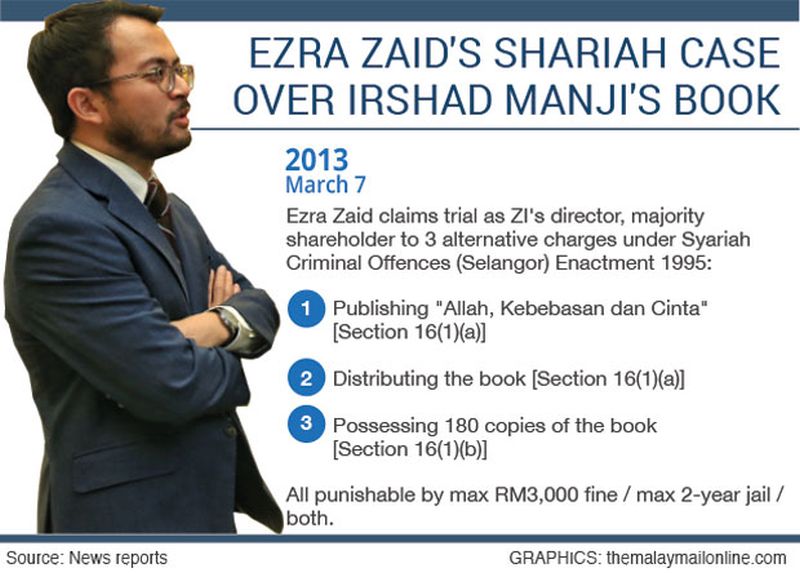 Farhan Haziq Mohamed, a lawyer representing Ezra in the civil courts, confirmed the decision by the Petaling Jaya Shariah Subordinate Court judge Syukran Yusoff on his client’s bid to defer the Shariah trial until the civil court case is resolved.

The case pending in the civil courts is a lawsuit filed by Ezra to challenge the Selangor Islamic Religious Department’s (Jais) arrest and prosecution of him over the Bahasa Malaysia version of Canadian writer Irshad Manji’s Allah, Liberty and Love book.

In the civil suit, ZI Publications and Ezra are seeking for a number of court orders, including the quashing of Jais’ raid and seizure on May 29, 2012 of 180 copies of the BM book, and an order for the return of the books seized.

The High Court initially granted leave to hear the lawsuit, but last September 6 dismissed it without hearing the case following a preliminary objection by Jais.

The Court of Appeal had in April unanimously decided, however, that Ezra’s case should be sent back to the High Court to be heard on its merits before a new judge, with Jais informing the courts in May that it would not appeal this decision.

But the Selangor religious authorities have now said they will file a preliminary objection against the case.

The hearing of the case was initially fixed for August 28, but was subsequently deferred to November 9 before being rescheduled to December 5.

The December 5 hearing of the preliminary objection will be before Kuala Lumpur High Court judge Datuk Kamaludin Said.

In a separate civil lawsuit, the High Court and Court of Appeal had both ruled in 2013 and 2015 in favor of ZI Publications, quashing the government’s ban of the Allah, Kebebasan dan Cinta book.

The Federal Court had last February granted the government leave for an appeal against the reversal of the book ban, but Farhan Haziq confirmed today that no hearing date has been fixed for this appeal yet.