KUALA LUMPUR, May 6 — The higher risk of women dying during pregnancy or in childbirth in Malaysia compared to Singapore is because of teen pregnancies and child marriage, activists said today.

Social activist Azrul Mohd Khalib said the government’s push for pro-abstinence sex education has resulted in the rise of teen pregnancies and child marriages, which affects the girls’ maternal health.

“If you look at countries that have been pushing for pro-abstinence like Uganda and other African countries, you can see there is an increase in the mother’s mortality rate,” Azrul told Malay Mail Online today.

Azrul said teen mothers face a greater risk of dying during pregnancy or in childbirth, as they are too young to give birth, or they give birth to too many children in a short span of time without proper medical care.

“If they are married at the age of 15 to 18 and immediately give birth in numbers, this can cause death as well,” he added.

The State of the World’s Mothers 2015 report by international children’s rights group Save the Children released on Monday showed that one in 1,600 women in Malaysia are at risk of maternal death, nine times higher than Singapore’s at one in 13,900.

The report also showed that a child born in Malaysia is three times more likely to die before turning five compared to Singapore, with the child mortality rate here at 8.5 per 1,000 births, while Singapore’s is 2.8 per 1,000 births.

Local daily The Star reported last December United Nations resident coordinator in Malaysia, Michelle Gyles-McDonnough, as expressing concern over child marriage, saying that based on the 2010 consensus, 80,000 married women in Malaysia were between 15 and 19 years of age, while there were 70,000 young married men. 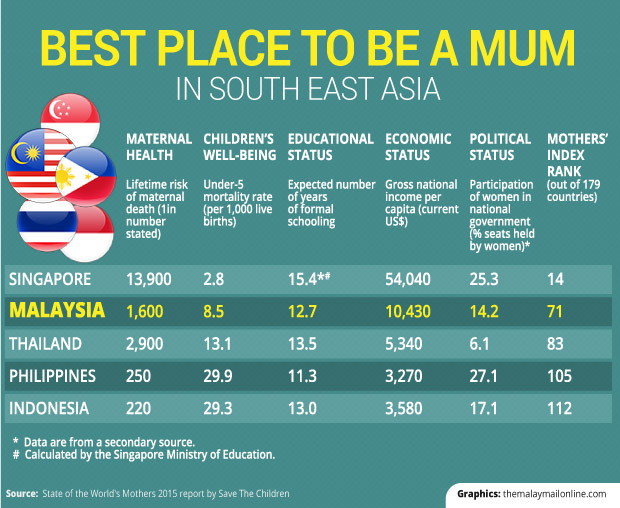 According to the Health Ministry, 16,528 teen pregnancies were recorded last year based on the number of adolescents that registered at government clinics. On average, there are around 50 teen pregnancies a day, with three-quarters involving married teens.

However, Dr Raj Abdul Karim, Asia director of Women Deliver, a global group advocating girls’ and women’s health and rights, said the government statistics do not necessarily reflect the actual number of cases as they only rely on registered government sources like public clinics and government health organisations.

“If you look at it properly, there are a lot more unregistered places like certain private institutions that people actually turn to,” she told Malay Mail Online.

Dr Raj said strict government policies on family planning that only allow contraceptives to be given to married couples have contributed to the country’s decline in maternal health and a rise in teen pregnancies.

“This service is not available to unmarried girls who are sexually active. Hence they either go to private clinics or are more likely to have unprotected or unsafe sex resulting in unwanted pregnancy, unsafe abortions, STIs or HIV and AIDS.

“Thus resulting in a decline in maternal health or maternal mortality,” she added.

Dr Raj also said religion should not prevent people especially married couples from family planning, like Islam only forbids the use of contraceptives for those unmarried.

“We should emphasise that religion should not stop you from family planning or the use of contraceptives.

“Even Islam allows the use of contraceptives but does not condone permanent methods like sterilisation. Also Islam allows family planning only for married individuals, not unmarried unless it is for medical or health reasons,” she added.

“There is a lack of family planning efforts compared to the 1970s and 1980s, as well as a lack of access to services for women in Sabah and Sarawak, migrant women workers and even indigenous women,” Sivananthi added, when contacted.