Shabery: Moment of silence for MH17 victims could start earlier than scheduled

SEPANG, Aug 21 — The one minute of silence as a mark of respect for the Malaysian victims of the MH17 tragedy could take place as early as 10.30am tomorrow, said Communications and Multimedia Minister Datuk Seri Ahmad Shabery Cheek. 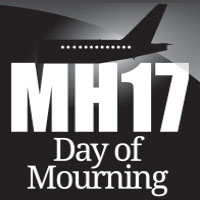 He said the time was brought forward by 15 minutes after the full dress rehearsal of the ceremony to honour the victims as their remains are brought to the KL International Airport (KLIA) as well as based on feedback from the meeting on the ceremony.

As such, he advised Malaysians to watch out for the announcement on when to observe the silence. It was announced yesterday that the one minute of silence could take place anytime between 10.45am and 11.15am.

“I ask all the people to listen to the radio, to listen to the latest information through our public address systems. If everything goes according to plan, the one minute of silence could begin as early as 10.30am,” he said.

Nevertheless, this would depend on the arrival of the special aircraft from Amsterdam, he told a press conference after a meeting with the coordinating committee of the ceremony to honour the victims of the MH17 tragedy, at the Bunga Raya Complex at KLIA here.

The minister advised the people to stop whatever they were doing to observe the one minute of silence, with Muslims reciting the Al-Fatihah and non-Muslims reciting prayers according to their religious beliefs.

The remains of 20 victims are scheduled to be flown to Malaysia tomorrow and accorded military honours.

The Yang di-Pertuan Agong, Tuanku Abdul Halim Mu’adzam Shah, and Prime Minister Datuk Seri Najib Tun Razak will be among the dignitaries present at the Bunga Raya Complex during the ceremony.

Ahmad Shabery said the Malaysia Airlines (MAS) special aircraft bearing the 17 coffins and three urns of ashes was scheduled to depart Amsterdam at 3.15pm (9.15pm in Malaysia) today and arrive at KLIA at 9.45am tomorrow.

He also said that the media could focus on two more locations in the country for its coverage of the one minute of silence, namely the Satok Market in Kuching, Sarawak, and the Kota Kinabalu Hyatt Hotel in Sabah.

These are in addition to the four locations already announced yesterday: The Penang Bridge, the Sultan Abdul Samad building in Kuala Lumpur, KLIA and KLIA2 as well as the Customs, Immigration and Quarantine (CIQ) Complex in Johor Baharu.

Ahmad Shabery advised the people to show that the nation was united in grief by observing the one minute of silence, whether they were at home or at their workplace.

Motorists were advised to stop their vehicles at that time as a mark of respect, he added. — Bernama