Rafizi: Make ministers, deputies pay for their own fuel 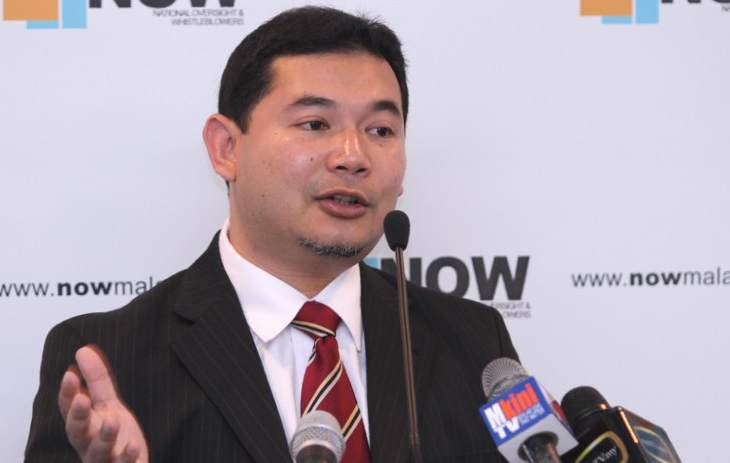 PETALING JAYA, Sept 3 — All Cabinet members including Prime Minister Datuk Seri Najib Razak should now pay for their own fuel since the government claimed underserving parties were enjoying the benefits of a blanket subsidy that it reduced today, said PKR’s Rafizi Ramli.

The demand was made in protest against Najib’s announcement to cut RON95 and diesel subsidies by 20 sen a litre yesterday, in a move the opposition lawmaker claimed would burden most Malaysians and only needed as a result of the prime minister’s weak financial policies.

“Because he is responsible for the decision, it is only apt that he also move to calm public anger by taking these measures: Instruct all ministers and deputy ministers to pay for their own fuel and diesel that all this while are shouldered by taxpayers money, by abolishing their fuel and diesel allowances,” Rafizi (picture) told a press conference here.

Other demands include an assurance that no further fuel price or tariff hikes will take place for a year beginning today and allowing Youth and Sports Minister Khairy Jamaluddin to debate the matter.

“Because it seems that Khairy is the only one from Barisan Nasional (BN) who is often willing to debate. The rest are often scared,” Rafizi, who is also Pandan MP, added.

In taking a swipe at the Najib administration’s decision yesterday to hike the price of lower-grade fuel, Rafizi argued that the subsidy rationalisation could have been avoided if genuine fiscal reforms had been implemented.

The PKR strategy director also questioned why Prime Minister Datuk Seri Najib Razak chose not to do away with hefty subsidies given to private companies such as independent power producers, which is estimated to be around RM13 billion, and instead “took the easy way out” by slashing public fuel subsidies.

“The fuel price hike burdens most of the average people and it is used as an excuse by Datuk Seri Najib Razak to hide his own weaknesses in managing the country’s economy,” Rafizi told reporters, and pointed to the country's recent credit rating downgrade by global agency Fitch Ratings and the ringgit’s lowered value against the US dollar.

He said Malaysia’s current economic condition would not be easily fixed by cutting its fuel subsidy but required a holistic plan to tackle its ailing financial structures.

This includes the need to trim down its chronic deficit, cutting down “wastage” that the opposition claimed was behind Malaysia’s debt pile, and the political will to combat corruption, a major problem behind the country’s plunging competitiveness, he said.

"Instead Datuk Seri Najib Tun Razak is taking the shortcut by cutting public subsidies of which its impact on the country's economy is least effective compared to other expenditures including corporate subsidies which is bigger," said Rafizi.

In his announcement yesterday, Najib said a 20 sen per litre reduction on the RON95 fuel and diesel would save the government RM3.3 billion beginning next year, bringing the total amount of fuel subsidies to RM24.8 billion per annum.

But Rafizi said the figures given was "a lie" aimed at scaring the public as it included subsidies for gas and liquid petroleum gas (LPG) and that total amount of subsidies for fuel and diesel only account for 59 per cent of the overall costs or RM14.8 billion annually.

The balance, estimated at RM10 billion or 41 per cent in subsidies yearly, are for gas and LPG and this does not include the subsidies given to IPPs which is estimated to be around RM8 billion per annum.

"This means corporate subsidy given through gas to industries and IPPs is almost the same amount as petrol and diesel subsidies given to the people.

"That is why PKR maintains our opposition to any fuel price hike as long as corporate subsidies are not restructured because it is unfair to punish the people who are already struggling to cope with financial strains when the cronies and corporate sectors are untouchable," he said.

The 20 sen increase in fuel is expected to spike household expenditures of the lower to middle income brackets the most.

Anticipating a public backlash, the Najib administration said it will announce measures to ease the burden of the lower and middle-income group in the 2014 Budget, including the possibility of increasing the amount of the 1 Malaysia People's Cash Aid (BR1M) from the current RM500.