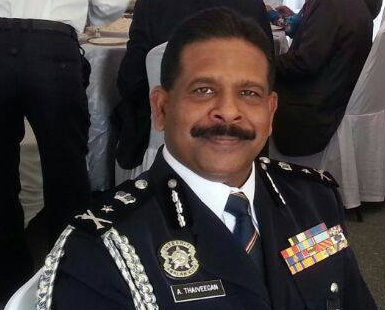 According to Chinese-language newspaper Sin Chew Daily, Thaiveegan (picture) denied saying or inferring that the Sedition Act may be used in the case or related incidents.

Although he did not expressly name the offending newspaper, Umno-owned Utusan Malaysia had published an article yesterday that quoted him as issuing such a warning to users of social media.

“The police will not hesitate to act against parties who distribute seditious information using social networks on the issue of the school,” Thaiveegan was quoted as saying in the report yesterday.

Originally posted at http://www.utusan.com.my/utusan/Jenayah/20130725/je_11/Sebar-gambar-murid-makan-di-bilik-persalinan--boleh-didakwa, the article has since been replaced with another piece coincidentally on the accidental discharge of firearms.

It is unclear if the newspaper has issued a retraction.

On Tuesday, a mother by the name of Guneswari Kelly posted on social network Facebook photographs that appeared to show several non-Muslim children and even adults at a school named as SRK Seri Pristana in Sungai Buloh taking their recess in the lavatory even as the school canteen went unoccupied.

According to her, the children were directed not to use the canteen — shown cordoned off in the pictures — as they would “dirty” the area. Instead, they were told to go to the school’s changing rooms and lavatories, and ordered to stay there for the duration of their recess.

A day after a firestorm erupted over images, Deputy Education Minister P. Kamalanathan declared the issue closed following an apology from the school head.

The eating area in the bathroom has since been closed and the children directed to once again take their meals at the school canteen.

Following the controversy, Deputy Prime Minister Tan Sri Muhyiddin Yassin, who is also education minister, confirmed on his Twitter page that the incident will be investigated and punishment meted to those responsible.