Demolish this soup that will delight both Popeye and the Incredible Hulk!

KUALA LUMPUR, July 31 — What’s green, purple and super powerful? If you guessed the gamma-strengthened alter ego of Dr Bruce Banner, well perhaps you read as many Marvel comics as I do.

I’m not thinking of the Incredible Hulk, not in his classic green skin and shredded purple pants look. (Though the green goliath is indeed super powerful.)

Instead I’m pondering a bowl of purple Chinese spinach soup, so simple yet full of flavour and nutrients. Spinach is a superfood, after all so perhaps Popeye would enjoy this soup too. (No more dad jokes, I promise!)

To be fair, Chinese spinach (or yin choy as it’s known in Cantonese) isn’t a true spinach but a type of amaranth. Also known as red leaf amaranth, this super vegetable is full of vitamins A, B and C, protein, magnesium and calcium.

In fact, Chinese spinach has double the amount of iron that regular spinach has, which makes me wonder if Popeye ate this variety when he wanted to pump iron. (So much for keeping that promise...) 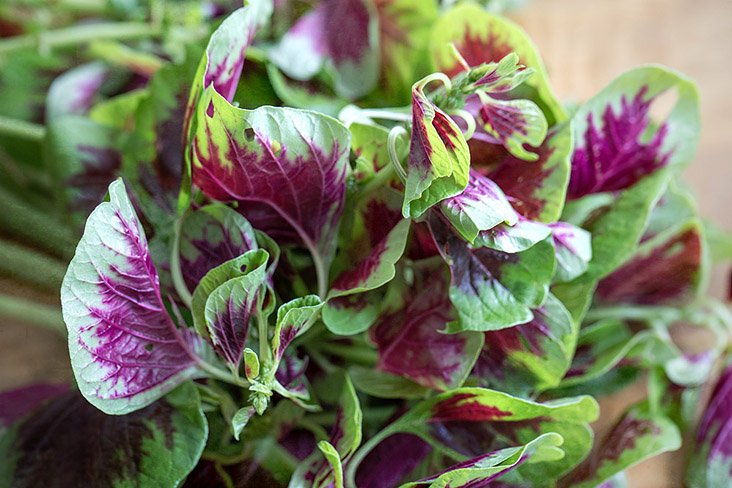 Chinese spinach (or 'yin choy' in Cantonese) isn’t a true spinach but a type of amaranth.

Beyond the realms of cooking, the Chinese spinach has been used in traditional Chinese medicine to help with heat strokes and fractures, and even for detoxification.

Consider it a superhero of the vegetable world. An amaranth Avenger, maybe?

But back to that bowl of purple Chinese spinach soup.

One of the reasons it’s so tasty is thanks to a one-two-punch of ikan bilis (dried anchovies) and pork spare ribs as the base of its stock, and the addition of a trinity of eggs — a century egg, a salted egg and a normal chicken egg.

Cooking is best when you’re using the simplest of ingredients but layering one atop the other, building levels upon levels of deep flavour.

So even if we have no ambitions to audition as an Avenger, here’s a bowl that is worth “demolishing” and savouring. Guaranteed good to the last drop, at least till you ask for your second or third bowl. 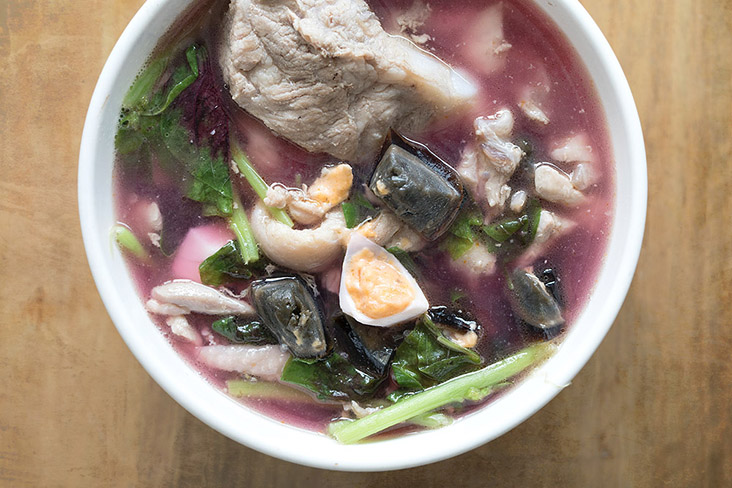 This soup has a lovely pinkish-violet hue that comes from the purple Chinese spinach leaves.

The purple or red variety of Chinese spinach or yin choy can be easily found at your neighbourhood pasar or the nearest supermarket. But don’t fret if they don’t have this twin-hued version available; the plain green Chinese spinach will work just as well though you’ll be missing that pinkish-violet broth.

For the stock, make sure to parboil the pork spare ribs first. This will remove any scum from the meat and bones — basically denatured protein that forms as rather visually unattractive foam.

Scum is perfectly harmless, of course but as the foam disperses, it will turn your stock cloudy. Best to remove it during parboiling, then start with a fresh pot of water. This way the purplish hues of your final broth will have a chance to truly shine.

Another element in your soup will be the ikan bilis but this can be added directly after soaking to prevent it from adding too much salinity to the broth. These are dried anchovies after all and quite salty if they aren’t soaked and drained first. 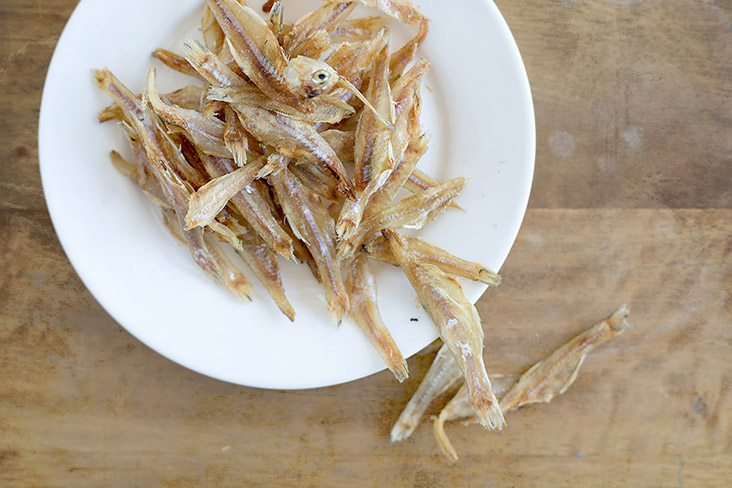 For the stock, using 'ikan bilis' (dried anchovies) add quite a punch of umami.

The Chinese spinach is only added once the stock is fully flavoured by the pork spare ribs and ikan bilis; these leafy greens cook quickly, even faster than regular spinach so don’t add them too early!

Where the eggs are concerned, I prefer adding the chicken egg to the soup a few minutes before serving to allow it time to cook but not be too homogenous (which would be the case if you were to beat the egg up first, as though for an omelette).

The century and salted eggs can be diced into coarse chunks and added to the soup after turning off the heat; these just need to be warmed up rather than cooked further, which would render them tough or rubbery. 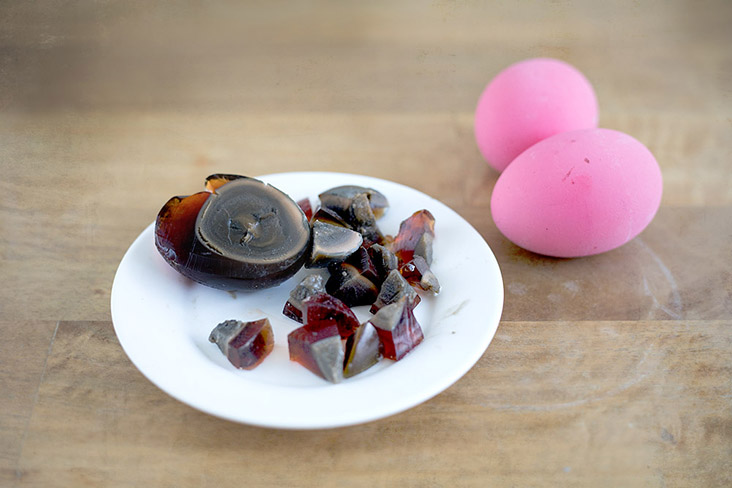 Coarsely dice the century egg before adding to the soup.

4 cloves garlic, lightly smashed with the back of a knife

Salt and white pepper to taste

After 2-3 minutes, turn off the heat and drain the water. Use running water to rinse the spare ribs and remove any scum that might be stuck in the crevices.

Add the now blanched spare ribs, cloves of smashed garlic and 1.5 litres of fresh water to a clean pot. Bring the water to a boil. Once it is boiling, reduce the heat to low and simmer for 1-2 hours to coax the flavours out of the meat and bones.

About 15 minutes before the end of the stock simmering time, add the ikan bilis (dried anchovies). Once the stock is ready, leave the spare ribs in the pot but remove the ikan bilis using a slotted spoon. 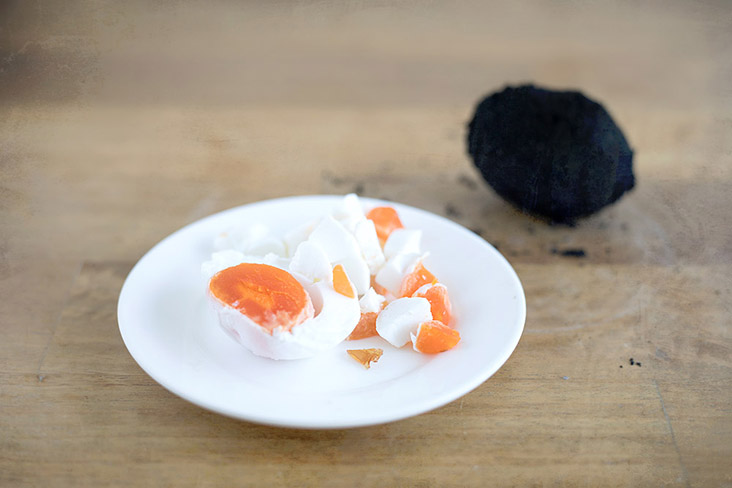 The salted egg needs to be cooked prior to using.

Now you have a clear, full-flavoured stock. Bring the stock to a boil again and add the Chinese spinach. Give it a stir to help the leaves wilt, then add the chicken egg. Stir the egg in so that it forms ribbons.

Turn off the heat and add the coarsely diced century and salted eggs. Stir them in to warm them and check for taste; you might need to season with some white pepper but additional salt might not be required given the saltiness of the ikan bilis.

Ladle the soup into bowls and serve immediately while the spinach leaves are still vibrant in colour.