IPOH, Jan 7 — Perhaps it’s past the morning rush. We are the only customers as we step into the kopitiam along Jalan Pasir Puteh after the requisite scanning at the entrance.

We are the only customers but you wouldn’t think it thanks to the comforting din of workers calling out orders (some regulars will drop by later for their takeaway kopi ping). The gentle roar of the traffic outside.

Kong’s White Coffee Kopitiam has that cluttered, carefree look of an establishment that knows it no longer has anything to prove. There is history here but you don’t come here for a history lesson. But rather: the company, the ambience, the food; as it should be.

Our guide, as before, is our friend the true-blue Ipoh Boy. He might be less familiar with his hometown’s specialty coffee scene but the man knows his kedai kopi and his kopitiam. No guarantees of Instagram photo-ops, he warns, but be assured of good eating.

And it’s good eating that he’s after here though the shop is renowned for their white coffee. He’s a good host but Ipoh Boy is hankering for some slices of roti bakar and roti stim himself, if he’s being completely honest.

Who could blame him? As we sink our teeth into the pillowy soft slices of thick white bread, steamed to perfection, we understand his cravings entirely.

This is modest and marvellous in equal measure. This is how our friend welcomes us to his hometown, with the stuff he grew up having and prides on sharing.

But back to the coffee. 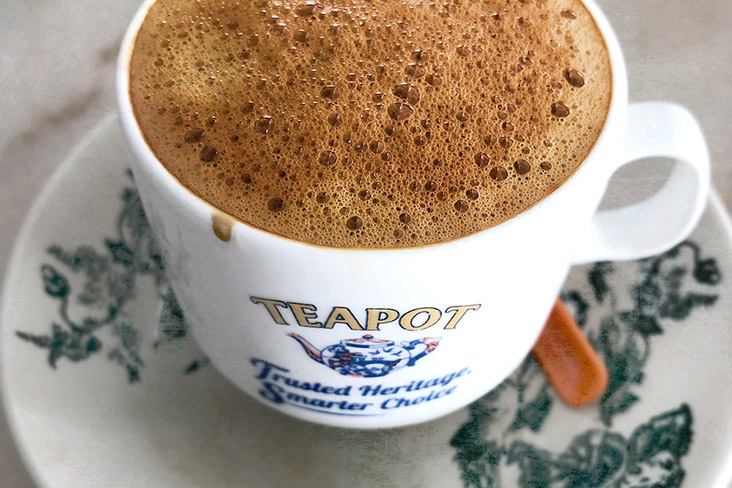 Ipoh is famous for its rich and creamy white coffee.

The white coffee at Kong’s — originally known as Kedai Kopi Chang Jiang and now run by the second generation of owners, with their own roastery — is rich and creamy.

Is it richer and creamier than its peers, the other kopitiams around town? We wouldn’t dare be a judge of that.

Certainly it’s a world apart from what passes as white coffee in ubiquitous 3-in-1 sachets. Certainly it’s what our Ipoh Boy proclaims to be his favourite. We are grateful for his hospitality and his passion.

We learn that “white coffee” is what locals consider pure, unadulterated coffee; “black coffee” by comparison, used to contain cheaper fillers to bring down costs. We are intrigued; this could be a precursor to the current trend of single origin beans used to brew specialty coffee, no?

Even with white coffee, we are allowed our individual preferences: one of us has it black and neat; another an icy kopi ping, to ward off the early heat from an impending noon; and our host enjoys his white coffee version of cham, that harmonious blend of milk coffee and milk tea.

As we sip and nurse our coffees, we take a moment to discuss how much has altered and how much never does. Whatever comes, the simple pleasures of Ipoh never change. Locals and visitors alike can count on that.

Another dependable Ipoh treat is its silken soybean delights, from the lactose-free and vegan-friendly soy milk (long before non-dairy options at coffee chains were a going concern) to the slippery lightness of a bowl of freshly made tau foo fa.

There are many places to savour these, of course. We have our bowls of tau foo fa at Funny Mountain Soya Bean along Jalan Mustapa Al-Bakri where a decent queue is served efficiently. 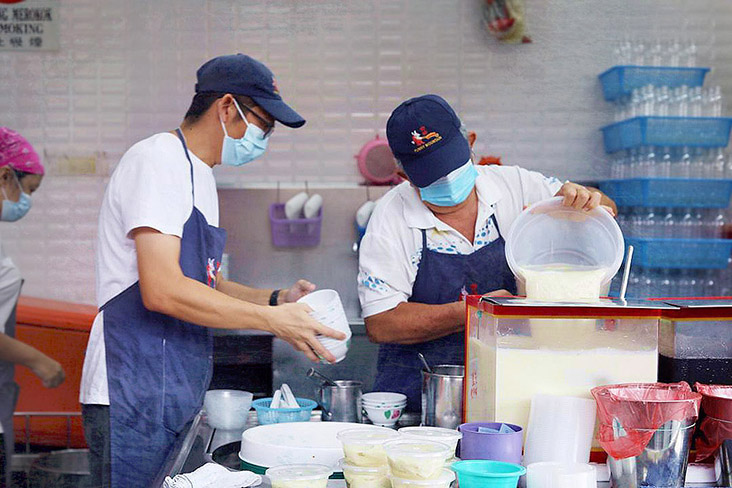 They come for something familiar though — as with many things in Ipoh — with a history of its own. The recipe, passed down by the current owner’s grandmother, apparently hails from the tea-drinking haven of Shantou in Guangdong, China; the beans are imported from Canada and the USA, however.

What was the saying? Everything local is global?

Yet the shop itself is distinctly local. The lack of tables and comfortable seating helps; the shop operates more like a kiosk. There are a few stools but most customers slurp away standing up, cradling their bowls in one hand. Most order for takeaway. 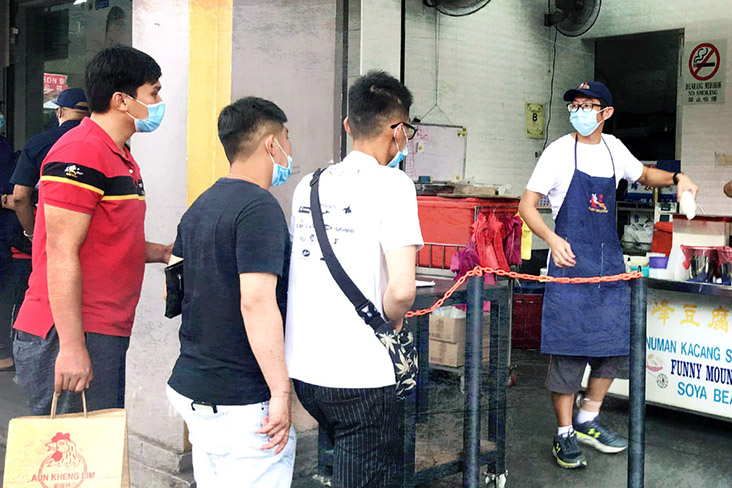 There’s always a steady stream of customers at Funny Mountain.

It’s a far cry from the pristine tau foo fa booths in shopping malls or the rapidly disappearing old-timer tau foo fa carts in dingy back alleys. This is something in between, a compromise between the past and the present.

Not unlike life itself. What seems new and shocking a year ago is now just the way it is. We adapt; we always do.

Later we would learn that Ipoh Boy would have recommended a different tau foo fa destination. Everything is subjective, however, and one thing Funny Mountain can boast of is their quirky drive-through. 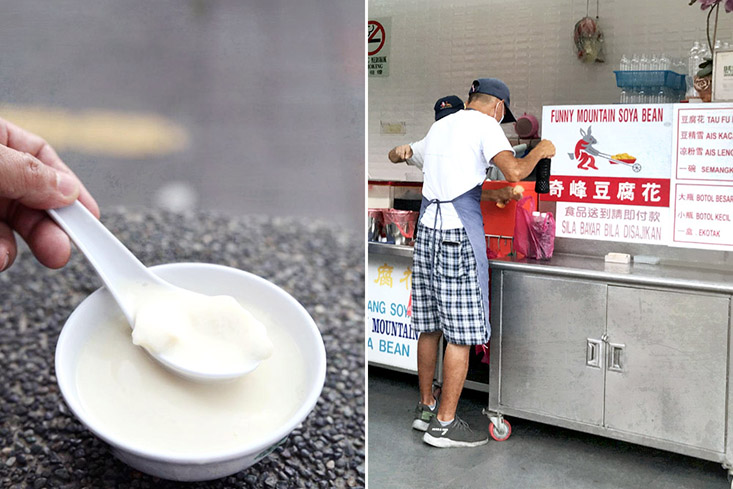 The bright orange traffic cone. The phrase “PETAK KHAS” painted in yellow and in capital letters. A steady stream of vehicles that stop and takeaway orders without the drivers getting out.

It’s quite a spectacle, almost a tourist attraction itself. It’s certainly good business, since not much space is required. And above all, admirable how everything is conducted without fuss or any trouble at all. 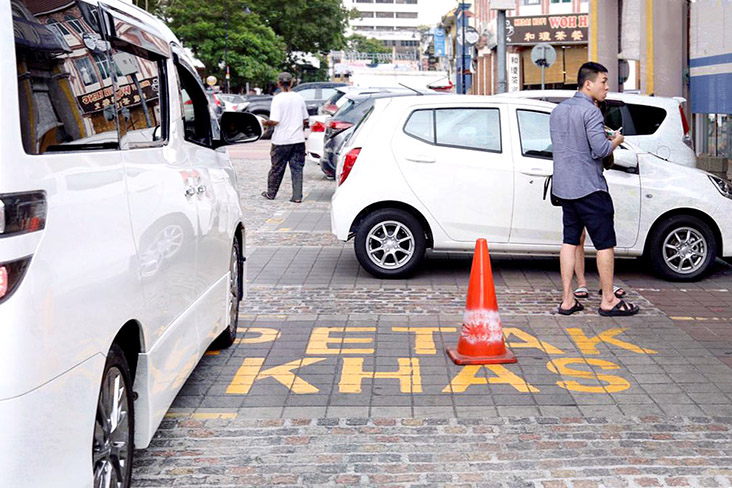 How about a soybean shop with its own “drive-through” service?

Perhaps as a visitor, as an outsider, that’s my most cherished takeaway from Ipoh: not the delicious foods (though they are most definitely delicious) nor the hospitable locals (though our hosts are generous and most thoughtful), but the ease with which everyone conducts their daily affairs.

This is a town that doesn’t sweat the small stuff. Why bother when you can savour the simple pleasures of life instead?

Open daily 8:30am till late