A police officer checks families waiting in an armoured vehicle before being evacuated in Lysychansk, eastern Ukraine May 15, 2022, amid the Russian invasion of Ukraine. — AFP pic
Follow us on Instagram, subscribe to our Telegram channel and browser alerts for the latest news you need to know.

LYSYCHANSK (Ukraine), May 18 — The giant policeman in military fatigues and combat helmet was losing patience with the tiny woman staring at his chest and flatly refusing to evacuate from the Ukrainian front.

Whistling shells had just resumed smashing into buildings across the war-shattered industrial city of Lysychansk.

Angelina Abakumova stood a little closer to her two children outside a shelter where she had spent the past month living in a pitch-black bunker and did not budge.

Policeman Viktor Levchenko pointed to the sky in exasperation and tried to coax the mother into an armoured truck waiting to make a mad dash past Russian artillery positions to a slightly safer corner of Ukraine.

“Seriously, tell me — what are you still doing here with the children,” the professional athlete turned regional traffic police chief demanded in a booming voice.

“Do you understand that this is a war zone?”

The 30-year-old mother nodded in silence and stood her ground.

Levchenko gave the mother a hard stare and told her that she and her children could soon die.

Then he told her that her presence was undermining the entire Ukrainian war effort by making the army focus on shielding civilians instead of fighting the Russians.

Then he gave up.

“We will be back tomorrow and I expect to see you here ready with your things. These children have to be evacuated to a safe place,” he said in a huff.

“I am not changing my mind,” Abakumova whispered on her way back to her basement.

“It is dangerous here now. Then it changes and it becomes dangerous over there. What is the point of going back and forth?” 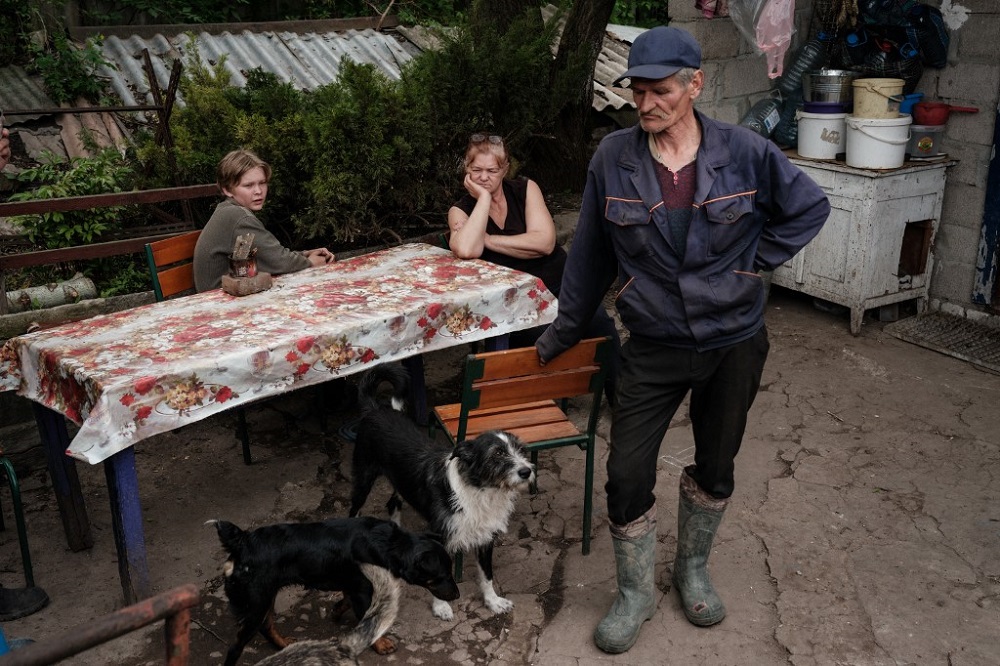 A family stands outside their home while living without electricity, water supply and phone network amid the Russian invasion of Ukraine, in Lysysyshansk May 15, 2022. — AFP pic

‘Everything is not fine’

Some civilians across the east Ukrainian front are making the difficult decision to wait out the war under ceaseless Russian fire.

Their varying reasons often involve a mixture of insufficient money to start a new life and fear of permanently losing their homes.

“I think people do not fully understand the situation,” he said a few moments after his encounter with the young mother.

“We have to evade shelling and make our way through very difficult conditions to reach these people and feed them and try to evacuate them,” he said.

“The people who sit here just think that everything will be fine,” he said of the dozens hiding in the underground corridors and intertwining basements of one of the city’s more fortified buildings.

“But unfortunately everything is not fine,” the 33-year-old said.

Volunteers who collect and distribute food at the shelter estimate that more than 20,000 of Lysychansk’s 100,000 residents are still trying to survive in the besieged city.

It has already lost power and cell phone service. Water stopped running in late April and the general assumption is that the gas line will be cut in the coming days.

The traumatised civilians who still walk the city’s streets seem almost oblivious to the escalating rocket and artillery fire from Russian units trying to cut the coal mining centre off from the rest of Ukraine.

Pensioner Volodymyr Dobrorez woke up and counted more than 30 artillery strikes around a nearby bridge running to Severodonetsk — a sister city now under partial Russian control — by the time he had his lunch.

The battles have grown in number as the Russians try to gain control of hills overlooking a road providing Lysychansk’s last link to the outside world.

“The past three days have been especially bad,” the 61-year-old said.

Many of those who remain understand that their lives will probably never return to the way they were prior to Russia’s February 24 invasion of its pro-Western neighbour.

At least one the city’s four mines employing a large part of its workers has flooded because the power outage has halted the pumps.

“I know that I won’t have my old job back when this thing is over,” said coalminer Vladyslav Sheremet.

“But I have seen too many people leave, spend the last of their savings, and then come back with nothing.”

The mother said she had to balance the fate of her children against that of her husband and his brother.

“Men of fighting age who are evacuated immediately get called up and sent off to the front like cannon fodder,” she said while her son and daughter clowned around on blankets spread out across the bunker’s concrete floor.

“I will not let my husband and his brother go. They would die on day one.” — AFP

China withdraws promise not to send troops to Taiwan after unification