JULY 24 — Many of the recent Covid-19 responses by governments around the world have made the world a more unequal place. In the name of saving lives, governments have pursued policies that grant large companies with special privileges not afforded to relatively smaller ones. They have also created a regressive situation in which many relatively-poorer individuals around the world, who had, over time, become increasingly able to enjoy much higher standards of living, are now suddenly made worse off — meaning things like leisure and travel are now, sadly, once again, something for the relatively-wealthy.

What capitalism has done to improve inequality

The accusation that capitalism brings about widespread inequality and that the state is needed to correct these inequalities through income redistribution by means of an increasingly progressive tax system is far from a new one.

One major flaw in the conclusion in support of state intervention in this regard is that it often treats the given amount of wealth at a given time and place (measured as GDP) as fixed while ignoring or at least downplaying significant improvements in the overall standard of living around the world. In fact, total wealth has grown exponentially since the kick-off of the Industrial Revolution, which originated with British textiles in the mid-18th century. In fact, as far as graphs go, it would hardly be a stretch to call it “the mother of all hockey sticks.” 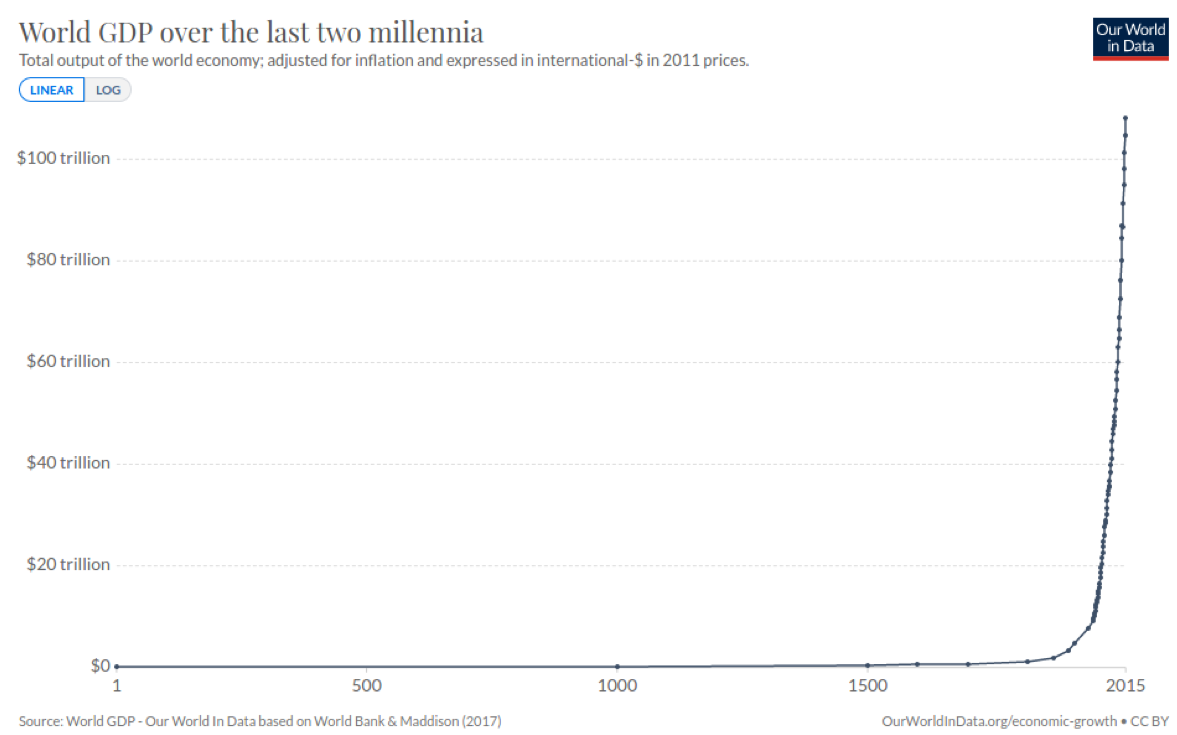 Seemingly, the most common argument in favour of income redistribution and similar interventions to address income inequality is that relatively poorer people should receive a “fair” share (assuming that what is fair should be defined by political elites). But a more reasoned approach to helping the poor would shift focus from inequality as such to instead seek to understand the institutions that allow for a paradigm shift out of poverty.

Extreme poverty, as we can clearly see, is the historical norm — except for royalty, who lived lavish lives at the expense of, well, everyone else. Poverty is the condition in which we find ourselves when we do not go out of our way to create wealth. Once we understand that total wealth can grow, we can also understand that with more wealth, a smaller share in relative terms can still mean a larger share in absolute terms. Further, it is worth mentioning that the wealth of the Medicis or the Rothschilds in centuries of the past, afforded them with no modern plumbing, electronic lighting or communications, automobiles or airplanes, or internet for that matter. Thus, in many ways, many of the poor of today are vastly better off than the richest of the past.

But as just one more indicator of wealth, we could look at, for example, mobile phone subscriptions in Sub-Saharan Africa and ask ourselves how is it that Sub-Saharan Africa in 2017 achieved almost the same amount of mobile phone subscriptions (85 per 100 people) that the United States achieved in 2008 (86 per 100 people). What went right, and how do we get a great deal more of whatever it is that has been working? Indeed, the poor of today are vastly richer than the poor of the past.

The market process, working and evolving thanks to the price system, has proven to be the best institution to bring along unprecedented growth. State control over the economy, by contrast, is yet to produce a thriving Hong Kong, Singapore, or Scandinavia for that matter.

How Covid responses have worsened inequality: The cases of New Zealand and South-east Asia

The global reaction to Covid-19 has been, in fact, a crystal-clear example of how state intervention can destroy decades of growth and at the same time increase inequality. But whatever inequality that may come about in the present pandemic is difficult to blame on a virus.

An economic crisis is usually accompanied by deflationary tendencies. Every student of economics is familiar with the phenomenon of stagflation — a simultaneous depression and inflation — which emerged with the oil crisis of the 1970s and was considered as something exceptional. In the present crisis, we face something similar, however, which is entirely policy-induced. Rather than the depression occurring naturally through market forces or even by Covid itself, it is a conscious and purposefully-caused phenomenon by lockdowns orchestrated by political leaders (although we do not necessarily assume nefarious intentions). Since the very beginning, supply chain disruptions brought about increased scarcity, and thus, price increases even for basic commodities, harming, first and foremost, the poor.

In New Zealand, the lockdown rules were applied so arbitrarily and often favoured larger businesses with enough money to fund lobbyists in the capital city of Wellington. Many smaller “green grocers“ (vegetable stores) and butchers were forced to shut down as the government did not offer the same “essential” status to these smaller players that supermarkets were privileged to have. Ironically, this made physical distancing more difficult when shopping for groceries, but it protected the large supermarket incumbents from having to compete against relatively much smaller players. As can be expected, this meant that shelves were often out of stock of products at the supermarkets; even more small businesses were wiped out than would have been if food stores of all sizes had been treated equally under the law; employees of those smaller food stores were unemployed, and so on.

Yet another phenomenon is clearly emerging in South-east Asia at the moment, in which governments have been reluctant to fully open their respective economies despite the very limited diffusion of the virus[1]; in this region, the trade-off analysis would be much easier than elsewhere. For example, in Malaysia, where the government’s own statistics put the Covid-related deaths at 120 people — in a country with a population of 32 million, unemployment rose from 3.3 per cent to 5 per cent between February and April, while it has been estimated that 2,000 eateries closed down for good. At the same time, immigration depots have been created to physically isolate migrant workers into camps, depriving the world of their contribution to the workforce.

This scenario is accompanied by rising prices in those leisure activities that over the years (pre-Covid) had become affordable to a rising amount of people – as people moved (on net) from lower income brackets to higher income brackets. Keeping international borders closed, for example, has eliminated competition for local incumbents working in tourism, and as a result, hotel and resort prices have skyrocketed; people can no longer choose foreign destinations for their holidays, so those who have spending power spend locally, pushing prices upwards. The combination of lack of competition and domestic demand from the wealthy makes leisure activities unaffordable for the low and middle class, which in past decades instead benefited from alternative solutions created by the market process (international competition).

We also see the same phenomenon for flight prices, which are on the rise because of the disruptions created by lockdowns over the previous months. While it is reasonable to think that businesspeople will resume flying when possible, the so-called “new normal” will bring fewer flight possibilities for the low and middle-class travellers.

Although the particular details of economic lockdowns vary from country to country, the examples detailed for New Zealand and South-east Asia are all too similar to how they played out in similar ways around the world. And, as could have been predicted, the poor take the hardest hit of all.

A few weeks of policy-induced lockdowns, by pushing both supply and demand to their respective corners, destroyed what decades of relatively free markets created, which made — among other things — “leisure” affordable for the masses.

*This is the personal opinion of the writers or publication and does not necessarily represent the views of Malay Mail.