Graham George Spencer received treatment at Gleneagles Hospital after being bitten by otters at Singapore Botanic Gardens on November 30, 2021. — Picture courtesy of Graham George Spencer via TODAY
Follow us on Instagram, subscribe to our Telegram channel and browser alerts for the latest news you need to know.

SINGAPORE, Dec 9 — A routine morning walk turned into a harrowing experience for a visitor to the Singapore Botanic Gardens last Tuesday (Nov 30) when he was bitten by otters there.

Graham George Spencer, who is British and a Singapore permanent resident, was bitten by a family of otters near the park’s entrance at Taman Serasi after another runner ran into their path.

Speaking to TODAY earlier this week, Spencer, who runs a maid agency, said that he encountered the family of about 20 otters during his regular walk with a friend last Tuesday.

He was walking up a path towards the visitor centre when he spotted them in the adjoining path to his right — about 4.5m away from him.

It was the first time that he had seen otters at the Singapore Botanic Gardens in the five months that he has been taking his daily morning walks there.

As he was waiting for the otters to pass, a runner ran straight into the path of the otters.

That was when they turned from “being quiet to going crazy like dogs”, Spencer said, declining to reveal his age.

While the runner managed to run past Spencer, the otters appeared to mistake him for the runner and attacked him instead, Spencer said.

The group of otters “hit him in the ankles and pushed (him) to the floor”, he added.

They then jumped on top of him and started biting him in his shoes and around his buttocks through his shorts for about 10 to 12 seconds.

Spencer’s friend, who was about “15 paces” away from him, ran up to him screaming and shouting in a bid to scare away the otters.

They appeared to hesitate for a moment, giving Spencer a chance to jump up and run away from them.

His friend then helped him make his way to the visitor centre to seek help. 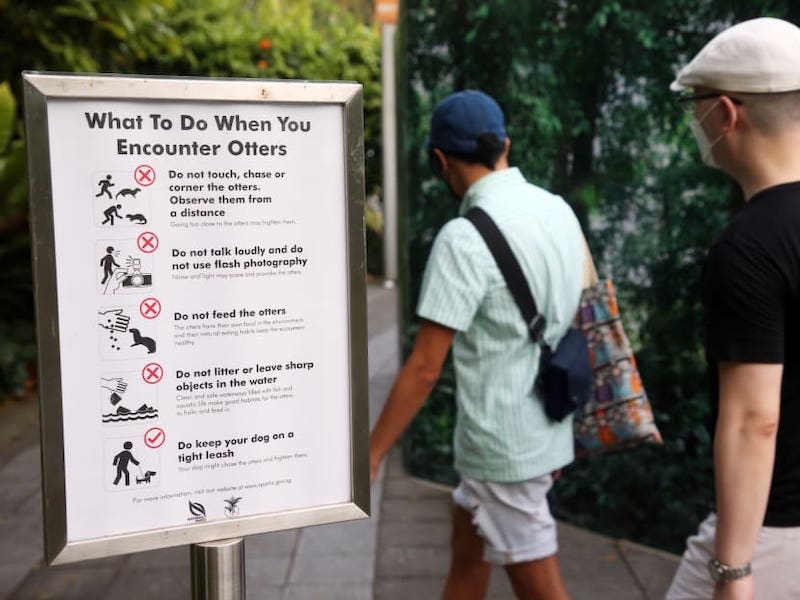 A sign advising visitors on what to do should they encounter otters is seen at the Singapore Botanic Gardens on December 7, 2021. — TODAY pic

A guard at the visitor centre, who appeared to be returning from a break, then offered Spencer some bandages to stem the bleeding.

Spencer declined an offer from staff members there to travel in an ambulance and chose to walk with his friend to the emergency department at Gleneagles Hospital across the street instead because it was quicker.

He was given tetanus shots and oral antibiotics at the hospital, where a doctor had counted the number of bites he had suffered, he said.

He was discharged the same day but has visited a doctor three times since to treat his infected wounds.

Spencer said that his treatment so far has come up to S$1,200.

Second report of animal attack in a week

This is the second incident to be reported this week of an animal attacking a bystander.

Last Sunday, a three-year-old girl received cuts on her face after being attacked by a peacock. She had stopped outside a house to look at the peacock while returning home from a playground.

Her mother publicised the incident on Facebook after the owner allegedly refused to take responsibility.

Several other incidents of otters attacking humans have also been reported before.

In 2017, a five-year-old girl was bitten by an otter at Gardens by the Bay.

In May this year, a 77-year-old man was bitten by an otter on Upper Boon Keng Road near the Kallang River.

Since the episode, Spencer said that his sleep has been disrupted due to nightmares from the incident, and he has been struggling to sit down given that there are 18 “puncture bites” on his buttocks.

Spencer said that he had also initiated a meeting with people from the Singapore Botanic Gardens last Friday to share his account of the incident and prevent repeat occurrences.

A senior representative from the Gardens wished him a speedy recovery and confirmed that an investigation was underway, but since then, there has been no further communication with the representatives, Spencer added.

They also appeared to have put up signs around the entrances of the Gardens following the meeting, to warn visitors of otters, Spencer noted.

He said that he wanted to find a way to avoid similar incidents from occurring, in case they result in more serious injury or even death.

“I just want people to be aware that these otters are not little puppies that you can stroke, and you need to be really careful. If they run into you or you step onto them, they will attack you.”

Responding to queries from TODAY on Wednesday, Tan Puay Yok, the group director of Singapore Botanic Gardens, said that the National Parks Board (NParks), which oversees the Gardens, was aware of the incident and was in contact with Mr Spencer.

Tan added that incidents of otter bites in Singapore Botanic Gardens, as well as in parks, are rare but reminded visitors to be mindful when visiting these areas.

“Visitors to green spaces should be mindful of their surroundings, observe wildlife from a safe distance, avoid feeding or approaching them, especially when there are pups as the adults can be protective over their young when approached by humans.”

Tan also said that volunteers and staff members at the Gardens monitor the movement of otters and educate the public on observing them from a distance and not interacting with them.

Education signs and advisories have been placed throughout the Gardens to advise visitors on how to manage encounters with otters, he said.

NParks said that it had installed an otter education sign at the Gardens’ Tanglin Gate, which is near the site of the incident, last Thursday.

Animal experts told TODAY that the otters had likely bitten Spencer in a bid to protect their young ones.

Anbarasi Boopal, the co-chief executive officer of the Animal Concerns Research and Education Society (Acres), said that the presence of young pups in the otter family could have triggered a “defensive response” from them.

This behaviour is typical of other social, wild animals such as wild pigs or macaques, which may perceive other parties as a threat if they approach the family, she added.

Bernard Seah, a member of OtterWatch and the Otter Working Group that track the movements of otters here, said that there is a family of otters, named the “Zouk family”, which have been regular visitors to the Gardens for the last few years.

He described them as “the most human-tolerant otter family” in Singapore and said that they are likely to have been “spooked” by the runner.

“Given that it was early morning, it may have been dark and confusing for the otters and (Spencer) may have just been a victim of circumstance,” he added.

These “quick bites” are a way for otters to tell people to “scoot off”, Seah said.

He advised people to give animals space when encountering them.

Anbarasi from Acres said that more signs placed around the Botanic Gardens and more public awareness on what to do when coming across wild animals will help to prevent such incidents from occurring. — TODAY