Should Malaysian students do a gap year?

Tuesday, 15 Mar 2022 7:19 AM MYT By Alwyn Lau
Follow us on Instagram, subscribe to our Telegram channel and browser alerts for the latest news you need to know.
By Alwyn Lau

MARCH 15 — I recall a seminar I ran in KL many years ago. During one of the tea breaks I said it may not be a bad idea to encourage our post-SPM or pre-college kids to take one or two years off before starting university i.e. do a gap year.

The reaction I received ranged from disbelief to abject horror. I may as well have proposed that all our kids climb Everest or die trying.

Whatever the case, I was thankful for the sharp reminder that Asian parents in general do not believe in their kids “taking a break” from studies.

Quite the opposite, in fact; one of the proudest bragging points of parents is how their kids fast-tracked the "normal" academic route.

I know a parent who pushed his daughter to do a Masters in Pharmacy at age 20 (or was it 19?). I’m aware that many international schools market themselves by boasting that most of their O-Level students take their exams before their 17th birthday.

One of my current students, in fact, is in the final year of her three-year degree program and she’s only 18.

It would appear that many parents are prepared to pay a premium for their children to graduate as fast as possible. The value of speed is taken for granted.

In such a cultural climate, the very thought of a gap year — a pause along the way? Stopping instead of accelerating?! Gasp! -- sounds like nothing short of anathema.

But are there good reasons why more young people should do a gap year between, say, high school and college? Or between A-Levels and a Bachelor's degree?

One of the most important reasons why an extended recess (if you will) may be needed before embarking on a university degree is the value of getting, well, some space. 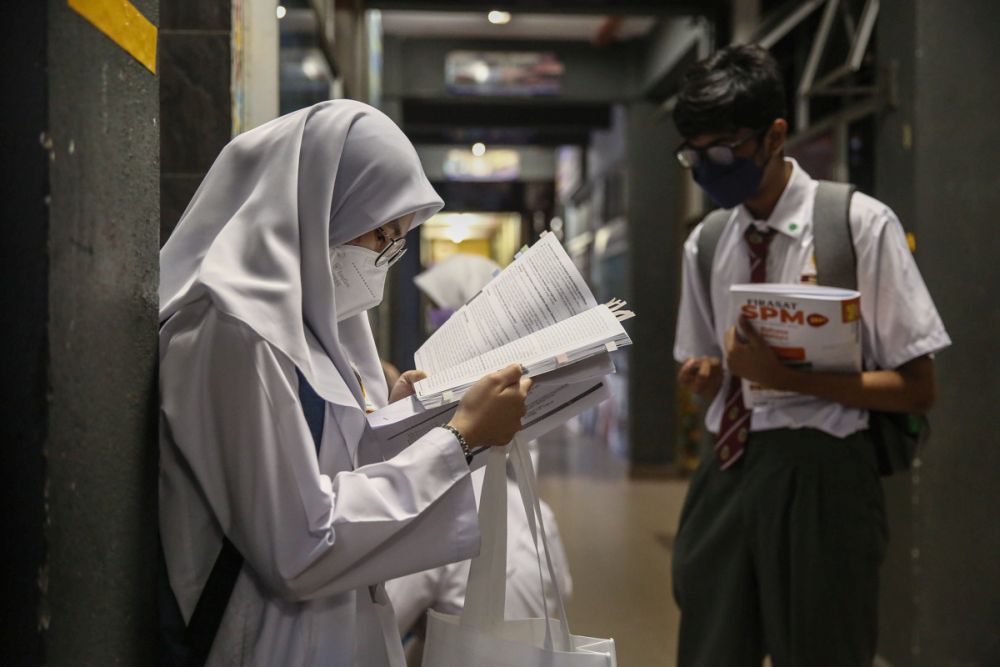 Form Five students get ready to sit for their SPM examination at SMK Seksyen 7 in Shah Alam March 2, 2022. — Picture by Yusof Mat Isa

Usually by the time a Malaysian student has finished SPM or STPM or A-Levels, he or she would have finished north of 12 to 14 years in school. This is about one and a half decades of formal schooling during which students — especially Asian students — are rarely given the opportunity to reflect and “think for themselves” in any substantial manner.

Does my child know what she wants? Has he been given sufficient time to “look around”, examine his options, think deeply and carefully about his vocation, etc.?

Is she even allowed to chart her future autonomously and independently, especially in a very "top-down" authoritarian society like many in Asia?

A one- (or two-) year break in studies could be akin to a race-car going for an overhaul; maybe take a year off from racing. We’re not talking about the in-race pit-stop here (those are akin to school holidays). We’re talking full-blown strip-to-the-chassis "servicing."

Often it’s necessary to get off the grid of Normal in order to rethink one’s understanding of or desire for Normal in the first place.

From seven to 18 years, it’s nothing but a factory conveyor belt of lessons and examinations; perhaps going back into "garden" mode where letting Nature do its slow and patient nurturing can help.

It is entirely possible that a young person may discover more meaning and passion in her studies precisely by spending more time doing something other than study.

This could involve spending, oh I don’t know, six months in Hong Kong or Bangkok to help out in an NGO? Or it could involve staying for a year in Botswana or India or Chile simply experiencing a very different culture?

Or it could mean diving into the world of art or music or photography, being involved in projects, earning a bit of money and generally living a life outside of academia before going back in?

Or, well, it could just mean spending eight or nine months working in Starbucks to earn some pocket money whilst making new friends?

What’s the rush, seriously? What huuuuuge difference does it make that you graduate one (or two or three) years later than your friends? (see note 1)

Another value of gap year activities is the greater maturity it develops in young people. By not having to worry about non-stop assignments and final exams or projects, a young person is able to plunge fully into, well, something else (!).

Again, a Malaysian post-teen would’ve had almost nothing but school assignments and classes full-time for more than a decade — why not expose him or her to another "sector" in a serious way?

Think about the positive effects on that person’s psychology of, say, helping out the Orang Asli for a few months or acting in some B-grade movie in Hong Kong or living in a monastery in South Korea or ministering to drug addicts in Jalan Kuchai Lama and so on.

Such an individual would hopefully have greater levels of maturity, resilience towards adversity, perception of truths and so on with which to navigate their university syllabi. One could, in fact, view one’s Bachelor degree differently because of the prior life-experience.

Finally, if we need yet another reason to do a gap year, I suppose the most practical one is you get to help your folks’ save a bit of dough (because we all know university degrees aren’t cheap) and who knows you may earn a bit to contribute to your own education.

Note 1: Malcolm Gladwell, in his best-selling book on success, even makes the straight-forward case that some professional athletes succeed because of their (slightly) older age.

He even recommends that schools group students born in the first quarter of the year away from those born later so the maturity levels can be better equalized.

For Gladwell, the age difference in question was a few months. Assuming he’s got a point, imagine what a difference one or two years can make for university success? See Gladwell, M. Outliers: The Story of Success (New York: Little Brown and Company, 2008), chapter 1.