Could e-textbooks be the solution to heavy school bags?

Monday, 28 Feb 2022 8:32 AM MYT By Alwyn Lau
Follow us on Instagram, subscribe to our Telegram channel and browser alerts for the latest news you need to know.
By Alwyn Lau

FEBRUARY 28 — The recent concern with super-huge school bags our children are forced to carry to school, coupled with the reopening of school, has reignited calls for firm solutions.

Even before the pandemic, the number of school books kids (from as young as Standard 1) are required to bring to school make them look like they’re hauling luggage in the airport for a four-month trip in San Francisco.

I hope the Education Ministry finds and implements that “holistic” solution they say we need.

Off the top of my head, I can think of, say, the use of school lockers so students don’t need to bring everything to and from home each day.

Or the school could keep the textbooks in class (I recall one of my secondary school teachers keeping all workbooks in the classroom, but not textbooks).

I suspect, though, that a major solution will involve the increased use of e-textbooks.

As far back as a decade ago, American marketing guru Seth Godin had already proposed that all textbooks should take the form of PDF files, in one stroke removing the need for students to lug phone-book sized references around. 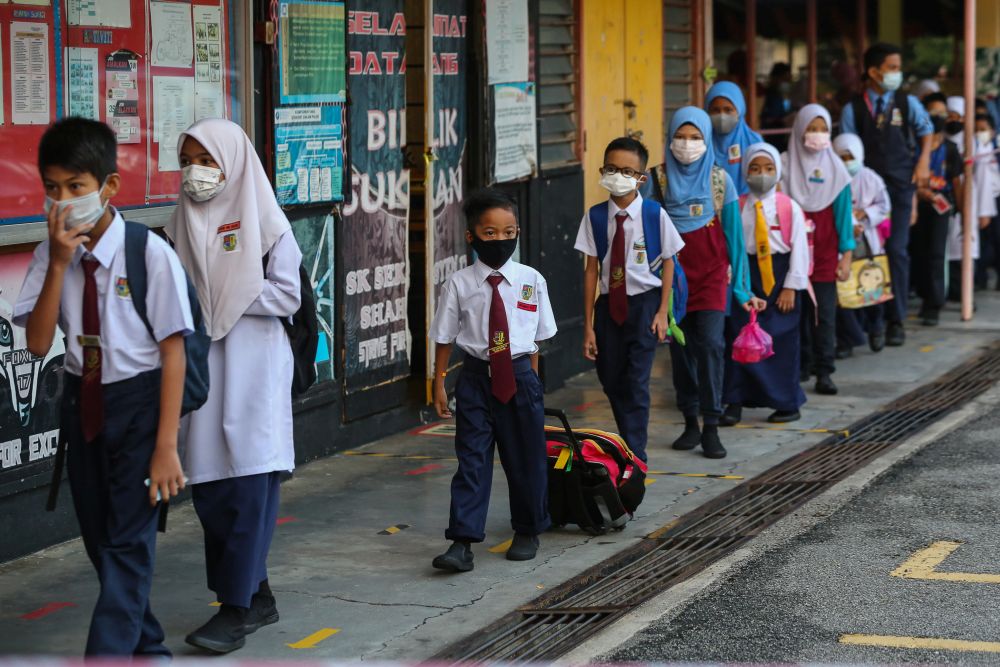 Even before the pandemic, the number of school books kids (from as young as Standard 1) are required to bring to school make them look like they’re hauling luggage in the airport for a four-month trip in San Francisco. — Picture by Yusof Mat Isa

As a former university student, I can appreciate this idea, especially given those monster texts from Paul Samuelson (Economics), Frank Wood (Accounting), Philip Kotler (Marketing) and many others. The question is, can this work for our public schools?

Given the ubiquity of smartphones (at least among the older kids), it would surely help if a few major references could be e-transferred into a PDF file which the child can access at home.

And don’t tell the textbook sellers, but this would immediately come with the benefit (to parents) of savings from no longer having to purchase the textbooks.

Or perhaps the school can purchase heavily discounted e-copies and share them on the school portal? Or schools can consider producing customised e-textbooks i.e. the subject heads would have to compile relevant lesson materials from multiple sources and share these with the students.

In addition, some teachers — especially those who expect students to refer to textbooks during lessons — may need to rethink their pedagogical methods.

Is it really necessary to have students look at their textbooks during a lesson? Can the students perhaps take notes and go back to revise on their phones or laptops?

There are other reasons for replacing those tonnes (and tonnes) of physical school textbooks with their e-versions.

Tech guru Kevin Kelly even talked about the screening phenomenon in which the future will consist of accessing information, images and messages from “wherever” (phone, office walls, traffic junctions, etc.), after which they can do mash-ups, share their work, etc.

In light of the advent of such a tech-soaked society, are physical textbooks really the best we can do? Shouldn’t the education sector be preparing our kids where the “book” is no longer delimited by physical binders, where information flows (from producer to producer) rather than remain static?

Isn’t the preference for physical textbooks (as opposed to e-textbooks) analogous to being stuck in an era of Encyclopædia Britannica (as opposed to Wikipedia)?

Finally, the wastage is a serious issue. Year after year, new copies (as in thousands and thousands of them) of the same books are printed and then chucked away after the final exam. It would appear the only beneficiary of that are the book-sellers; the rest of society picks up the cost of this externality.

And all because we refuse to make e-textbooks a social given?