A conversation with Malaysia’s own Indiana Jones

Tuesday, 07 Dec 2021 8:09 AM MYT By Alwyn Lau
Follow us on Instagram, subscribe to our Telegram channel and browser alerts for the latest news you need to know.
By Alwyn Lau

DECEMBER 7 — I first met Ron Choong about 10 years ago when I co-hosted a science and community seminar with him as the main speaker.

Since then I’ve had many conversations with him related to Malaysian politics, archaeology, philosophy and we even had an interesting chat about whether or not demons and angels really exist.

Ron, who was born and bred in the Klang Valley, is presently the director of the Academy for Christian Thought based in New York City (NYC).

He’s spent more than 30 years zipping around the world visiting archeological dig sites and even excavating in some, giving talks and generally being a bad-ass researcher on any topic related to science, faith, ancient history and foods which we won’t find on McDonald’s menus. If anyone deserves the label “Malaysian Indiana Jones”, it’d be him.

I thought it’d be a good idea to share my recent Zoom interview slash catch-up chat with him, especially in light of how the Covid-19 pandemic has affected everyone.

I was born in KL, bred in PJ until 17 then Penang for three years. My childhood was relatively uneventful. Basically hung around the Jalan Imbi area and not much of a sportsman nor academically talented.

When did you move to NYC and why? How do you find NYC compared to KL?

London opened my eyes to the notion of educational meritocracy and the US provided opportunities for academic scholarships that I optimised to the hilt. So in London, I did my LLB (London) and a BA (Open) simultaneously. 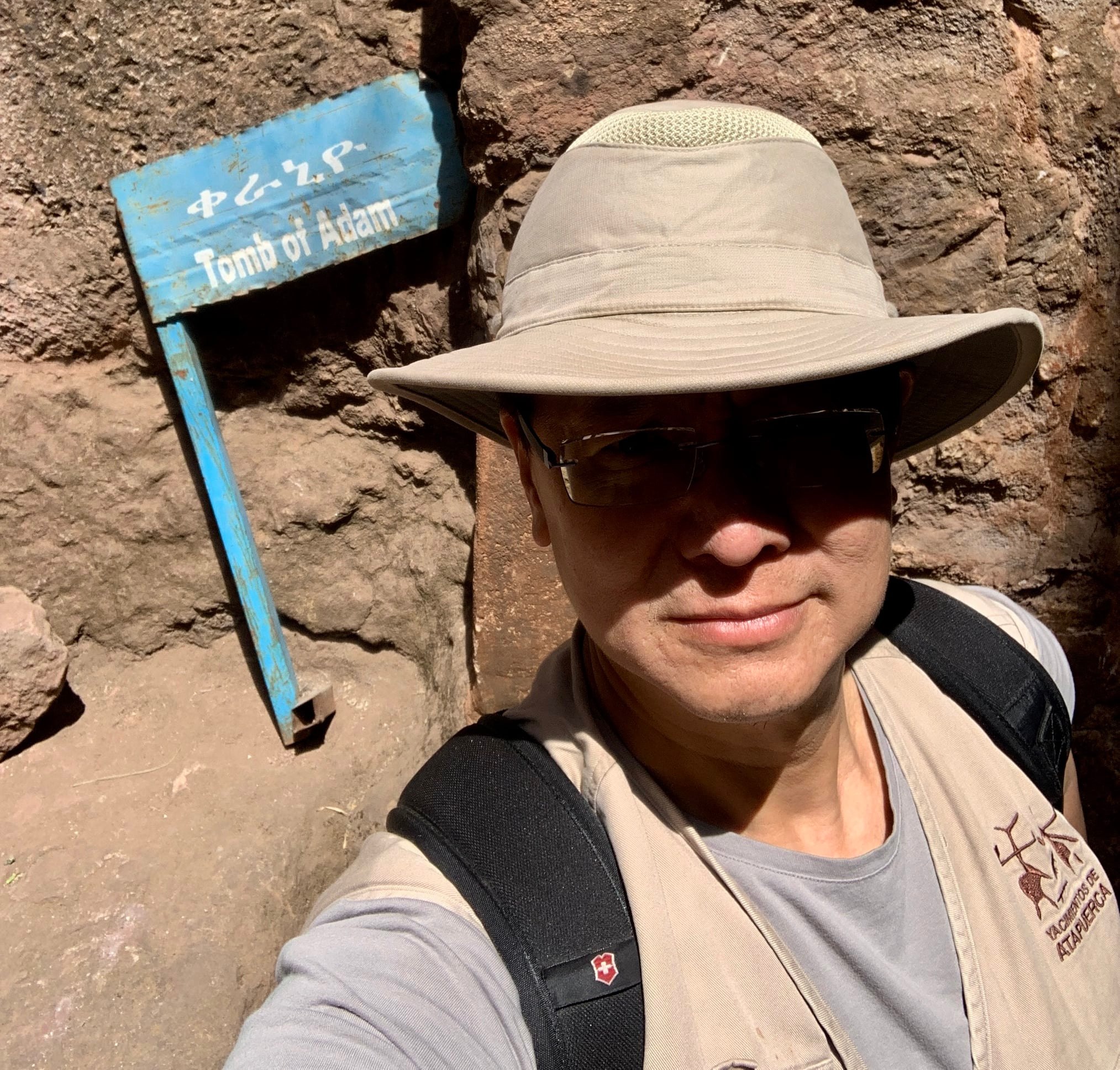 Choong has spent more than 30 years zipping around the world visiting archeological dig sites and even excavating in some. — Picture via Facebook

In the States, I repeated the trick; Master of Sacred Theology (Yale) and PhD (Princeton) simultaneously.

I wouldn’t say such academic forays are for everyone. If you love a certain topic and if said topic demands a lot of academic study and you’re thrilled by it, then yes. But always follow your dreams. If academia isn’t for you, don’t obsess over it.

For me, my hunger to learn has remained with me to this day.

You’ve travelled extensively and have been involved in numerous science and archeology projects. You’ve also been dubbed the “Malaysian Indiana Jones” on a few occasions! Tell us a bit about these projects in general. What were your aims?

I consider myself an accidental archaeologist.

In the 1990s, I won a competition to study archaeology in Israel, but Malaysians were unable to visit Israel. The likelihood of a Malaysian biblical archaeologist in the 1990s was slim to none.

Yet, there I was in 1997, armed with a special dispensation by the Malaysian government upon the request of Princeton Seminary to allow me political passage in the name of science.

This was how a Malaysian boy became an accidental archaeologist.

My aim was to attempt an interdisciplinary approach to understand what it means to be human by study, travel and reflection. To this end, I embarked on a string of field research projects that turned out to be a lifetime of adventures and misadventures.

I’m delighted to say that America provided me with 13 years of continuous study (1996-2009) on full scholarships while earning four graduate degrees.

Each summer, I would buff up my scientific training with intensive courses at Cambridge and Oxford, from astronomy to particle physics, to nano-biotechnology to microbiology to immunology and chemistry.

I know I know, it’s not exactly what every Malaysian wants to do, but hey I love studying, reading, researching, writing and all that.

In the past 37 years, I have visited just over a hundred countries in my quest to understand the human experience. Every known human culture began with religion or belief in a higher power: Cult, culture and agriculture (or, as I like quip: God, fun and makan).

I also enjoyed studying cosmogony (origin of the Universe), biogenesis (origin of life), paleoanthropology (human origins or, as I like to call it, the study of very old people) and, later, a fourth field which became a major part of my PhD, neuroscience (brain function).

I supplement my reading with boots-on-the-ground field research. As Indiana Jones said in Kingdom of the Crystal Skull, archeologists need to stay out of the library!

(Interviewer’s note: I asked Ron how many books he has in his personal library, he told me the number exceeds 7.000, not counting the digital ones.)

For example, to understand how and why early scientists interpreted the human fossils, I visited the archaeological sites in Africa (Ethiopia, Morocco, Tanzania and South Africa) and Indonesia (Java and Flores) to study the religious assumptions of both the subject cultures and the discoverers themselves.

This included studying our closest genetic relatives, the three great apes (chimpanzees, gorillas and orangutans), which brought me to Tanzania, Rwanda and Kalimantan.

My interest in the history of civilisations led me to Iran, Iraq, Syria, Jordan, Turkey, Lebanon, Greece and Italy while my survey of the Chinese and Indian Silk Roads led to my tracing the footsteps of Ibn Battuta, Marco Polo and the Apostle Thomas (one of Jesus’ disciples who went to India).

My trips were full of mishaps and unforeseen misadventures where I sustained all manner of injuries that led to the moniker, Indiana Jones. However, unlike Indy, I do not end up with treasures galore and a pretty girl on my arm after 90 minutes.

Please share TWO of the most important lessons you believe all Malaysians can learn, based on your work and travels

In my travels, which is a major part of my work, I discovered two truths:

(a) Prioritise what is important to you in this very short life we are privileged to live. For me, it is to see as much of the Earth as I can before the earth covers me when I close my eyes for the final time. The world is truly your oyster. If anyone does not pay for your lunch, don’t worry what they say or think of you.

(b) Smile, eat anything before you, and respect local customs. People everywhere will tend to respond with kindness. Most are as curious about you as you are about them and we all share similar anxieties about life, illness and death as well as hopes for joy and happiness.

What are your plans when international travel can resume again?

Covid-19 has provided an opportunity to write down my adventures and work has begun to complete five photo-books outlining my visits to places others might find interesting. They are not travel guides but rather tales from my travels, warts and all, the good, the bad and the ugly.

1) Russia’s Trans-Siberian Railway to study the myriad cultures of Russia’s 22 ethnic republics and 120 ethnic groups from St Petersburg to Vladivostok, including the Islamic republic of Tatarstan and the Buddhist republics of Buryatia, Tuva and Kalmykia.

2) Saudi Arabia to learn about the pre-Islamic civilisations.

3) Chad, where a six-million-year-old archaic human fossil was discovered. This compares with Malaysia’s 11,000 year-old Perak Man.

Overall, I do believe that travel has the power of breaking us free from our “black and white” absolutist thinking about the world and how people and cultures “must” operate or behave.

Travel and deep study expose us to new realities which invite us to change our minds about society. It exposes our own prejudices and biases, to see that we are all part of one species, truly blessed to experience life like no other. Let us be kind to each other and have compassion especially for the troubled and voiceless among us.