Najib was convicted of the misappropriation of RM42 million from government-owned SRC International Sdn Bhd, and is awaiting his appeal at the Federal Court. — Picture by Razak Ghazali
Follow us on Instagram, subscribe to our Telegram channel and browser alerts for the latest news you need to know.
By YISWAREE PALANSAMY

KUALA LUMPUR, May 12 — Veteran politician Lim Kit Siang’s recent prophecy of a “golden era revisionism” for Malaysia, which he said would see the return to power of convicted and corrupt politicians, following the election triumph of the son of disgraced Philippines dictator Ferdinand Marcos, is a far cry from the situation in both nations, analysts opined.

Speaking to Malay Mail, the analysts felt that the idea paints an inaccurate picture as it fails to address several factors, particularly the political histories that people in the Philippines and Malaysia had lived through.

The trio said that what the senior Marcos represented for the Philippines is vastly different from what convicted former prime minister, Datuk Seri Najib Razak, represented, or still represents for Malaysia.

“We are talking about things which are not comparable in time and space.

“I think we should not discuss lies and misinformation, which are typical of any political regime, both in democratic and non-democratic regimes. Covid is an example of how governments around the world have misused their information power to force people into irrational behaviours, and this is in regards to the great majority of world nations, from the tyrannical China to the democratic West.

“Instead, the interesting question to be posed here is: why do leaders anchored to the past still exercise so much fascination over the people?

“This, I believe, is not due to the power of lies. Rather, newer generations of politicians have probably failed to propose a credible programmatic alternative, and therefore, people easily fall for sirens from the past, believing in past golden eras,” Carmelo Ferlito, chief executive of the Centre for Market Education (CME) and a senior fellow at the Institute for Democracy and Economic Affairs (Ideas), told Malay Mail.

Ferlito believes that this factor is due more to the inability of “new faces” to develop credible alternatives, than to the issue of lies.

He added that in the case of Najib, while it can’t be denied that in the past two years, the Pekan MP has probably been the only “big shot” able to advance proposals for different emergent issues, he did so with commendable communication powers and strong arguments.

“In many circumstances, I disagreed with his proposals, but those proposals were there, while other parties have been less propositive or at least less effective in spreading their ideas.

“In a nutshell, my point is, look at what has been lacking from the political sides, alternative to Marcos and Najib in their propositive capacity in order to build a credible alternative, rather than simply accusing the people of falling in love with ‘liars’,” he added.

Ferdinand “Bongbong” Marcos Jr yesterday became the first candidate in recent history to win a landslide majority in the Philippines presidential election, opening the way for a once unimaginable return to rule for the country’s most notorious political family. 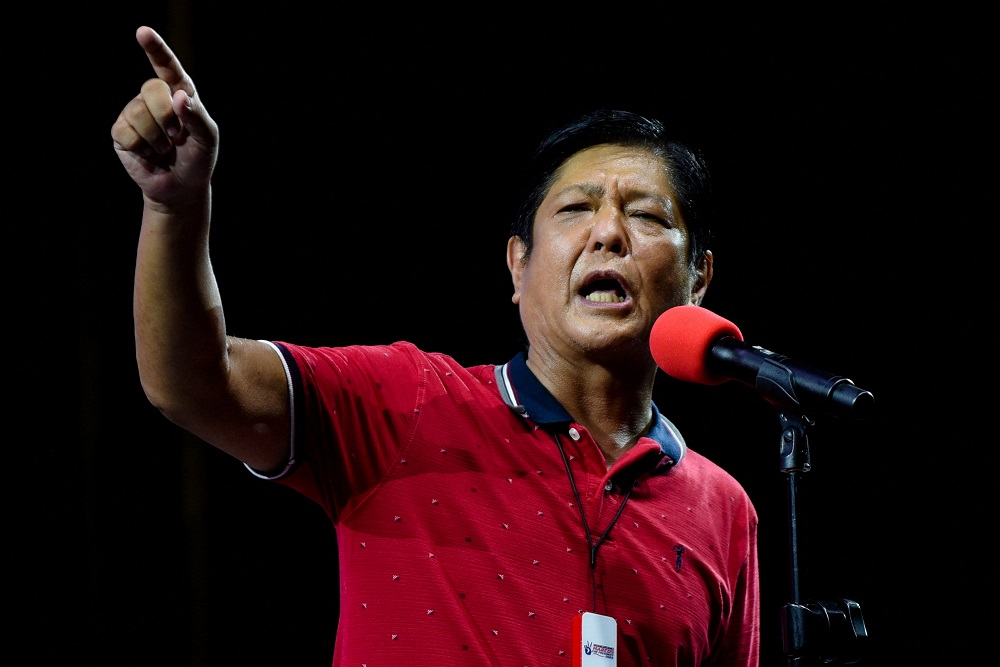 Marcos Jr fled into exile in Hawaii with his family during the 1986 “People Power” uprising which ended his father’s 20-year autocratic reign and has since served in the republic’s congress and senate since returning to the Philippines in 1991.

In a statement yesterday, Lim, who is the Iskandar Puteri MP, said that Marcos Jr’s win proves that social media disinformation and lies can whitewash the past, warning that a similar situation can unfold here, enabling the return of tainted leaders, pointing to Najib.

Najib was convicted of the misappropriation of RM42 million from government-owned SRC International Sdn Bhd, and is awaiting his appeal at the Federal Court.

Despite his conviction, Najib has emerged as a strong social media force, often taking jabs at the Opposition on various issues and suggesting policies.

His thoughts and postings have also earned him a strong following, and he has since become commonly known as ‘Bossku’. His campaign trail in Johor during the state election there also saw large groups of people gathering to greet him, much to the ire of his critics.

In his statement, Lim said that Malaysians have “a mountain to climb” to prove to the world that Malaysia is not like the Philippines.

“And that Malaysians will not regard the last decade as a ‘golden era’ when the nation was condemned worldwide as a kleptocracy — as the 15th general election, whenever it is held, is less than a year away.

“Could Malaysia prove that we are not the Philippines where social media disinformation and internet lies could ‘whitewash’ the kleptocracy and abuses of power of the last decade and turn it into a ‘golden era’ for Malaysia?

“These are serious thoughts for Malaysians who love the country,” Lim said, branding the Philippines poll as the “most divisive election”.

He said this was because survivors of the senior Marcos’ brutal regime are horrified given the atrocities of the Marcos family in the past when thousands of political opponents were tortured, arrested and disappeared under his rule, while as much as US$10 billion was plundered.

Lim said that Marcos Jr, meanwhile, has presented no real policy platform, campaigning on a simple but ambiguous message of unity.

Senior researcher at the O2 Malaysia think-tank, Anis Anwar Suhaimi, felt that the Philippines election is the translation of the will of its people towards a new leadership, and added that Lim did not position himself as a citizen to understand the election result.

Anis said that starting from the People Power Revolution in 1986, Filipinos have undergone three transitions of government under the liberal democracy agenda after the dictatorship of the senior Marcos.

He added that the practice of liberal democracy over the past three decades has frustrated the Filipino people to reform against corruption and ensure economic prosperity.

“Thus, the attitude of the Filipino people towards democracy has changed and is more inclined towards illiberal democracy as an alternative option.

“Lim Kit Siang has erred in assuming the golden era of the Philippines is within 30 years of liberal democracy practices. This is because the current generation in the Philippines feels that the state of the country during the Marcos leadership era is better than today. Hence, that era is believed to be the golden age and ‘disciplined’ democracy.

“The Filipino people are realistic by electing a strong leader to reunite the Filipino. Also to note that the liberal narrative that revolves around human rights and freedoms no longer captivates the hearts of voters,” he added.

Anis said that within the Malaysian context, Lim should understand the people’s frustration towards Pakatan Harapan’s (PH) 22-month rule.

“They had failed to deliver their promises as well as the economic downturn and strained Malaysian diplomatic relations occurred during their time.

“Thus, Malaysians now are more realistic in weighing the performance of the party compared to the rhetorical campaign. What the people want is not actually an authoritarian rule but a guarantee from the leaders to provide stability and improve the well-being of the people.

“If Lim Kit Siang and the DAP-PH leadership remain detached from the reality of the people, their campaign in GE15 will be less effective and will affect their winnability,” Anis added.

Senior Fellow at the Nusantara Academy for Strategic Research (NASR) Prof Azmi Hassan said he only “concurs partly” with Lim, on the role of social media, and how the Filipinos viewed Marcos Jr and how they have since “forgotten” the era of his dictator father.

“But again, in the Philippines case, it was 36 years ago and the majority of young voters never went through the over-20-year rule under the senior Marcos. So Marcos Jr made full use of social media to portray his own era by limiting the information on his father.

“So, I think this misinformation really works and analysis says that part of the landslide victory is due to the misinformation in social media. Now that aside, in the case of Malaysia, Najib’s era is only a few years back, no more than five years ago.

“This is still fresh in our minds and in Filipino politics, it is all about personality cults. The personality plays a very important role, so in this case, the name Marcos really helped Marcos Jr.

“However, in Malaysia, our voters are more, I would say, responsible, more mature,” he said, adding that the level of misinformation that worked in the Philippines would “never be the same” or “100 per cent workable in Malaysia’’ as most of the voters have lived through Najib’s time as prime minister.

“So if you support Najib’s leadership, then it was based on experience. So if you don’t support Najib or are afraid of him coming back, it is also because you went through the Najib era,” Azmi added.

He said this was why social media misinformation will play a very minimal role in the Malaysian political scene.