Thanneermalai Shree Balathandayuthapani Temple committee member S.Karthikeyan decorates a chariot in preparation for Thaipusam in George Town January 9, 2022. — Bernama pic
Follow us on Instagram, subscribe to our Telegram channel and browser alerts for the latest news you need to know.

GEORGE TOWN, Dec 9 — The National Unity Ministry, the National Security Council (MKN) and the Penang government’s recent ruling against holding certain ceremonies, including the breaking of coconuts, during Thaipusam on January 18 seems to have been accepted by the Hindu community at large.

Owner of coconut supplier Joez Coconut, Joel Jeyachandran, 37, said he did not order coconuts for Thaipusam this time as he already knew coconut breaking would not be allowed under the standard operating procedure (SOP) set by the MKN.

“We did not order coconuts for the celebration this year like last year due to the Covid-19 pandemic. So, we are only focused on coconut bookings for daily sales such as coconut milk and grated coconut for distribution to public markets in the state and for other use,” he told Bernama when met at his premises near Jalan Dato’ Keramat here, yesterday.

He said he was able to receive bookings of up to 100,000 coconuts before the pandemic, but after the the ritual was banned for two consecutive years, he could not generate any specific revenue from the festival anymore.

“We lost RM100,000 last year after the Thaipusam celebrations were called off at the last minute. But we are prepared to avoid a repeat of the loss this year and have not made any bookings despite many queries from customers who want to fulfil their vows,” he said.

Despite the numerous SOPs imposed on the Thaipusam celebration and the lack of bookings for coconuts, Joel claimed coconut prices were rising and hoped the authorities would monitor the situation to prevent prices from becoming unstable in the market.

“If the price of a coconut was RM1.70 prior to this, now it has gone up to RM1.85. This is the price from the plantations and we have to follow. We are not sure why the price went up, maybe it is linked to the cost of production or fertilisers and other issues.

“Hopefully, the authorities can monitor the price of coconut because if it goes up, the prices of all items linked to coconut such as coconut milk, cakes and food will also go up,” he said.

Meanwhile, a kavadi-maker of over 50 years, R. Karunagaran, in his 60s, regarded the Thaipusam celebration this year as bleak since there would be no kavadi processions.

“We must follow the directives of the council and government. It is okay, because health and public safety are more important. Hopefully, we can celebrate as we usually do next year,” he said when met at his residence here, recently.

Despite the kavadi procession ban, the father of two said he and several friends would be involved in making a five-metre high ‘kolum’ to be exhibited at the Arulmigu Bala Thandayuthapani Temple gate near Jalan Kebun Bunga, here for Thaipusam.

“I will carry out any decorative work involving Thaipusam if still needed,” said Karunagaran, a former Telekom employee. 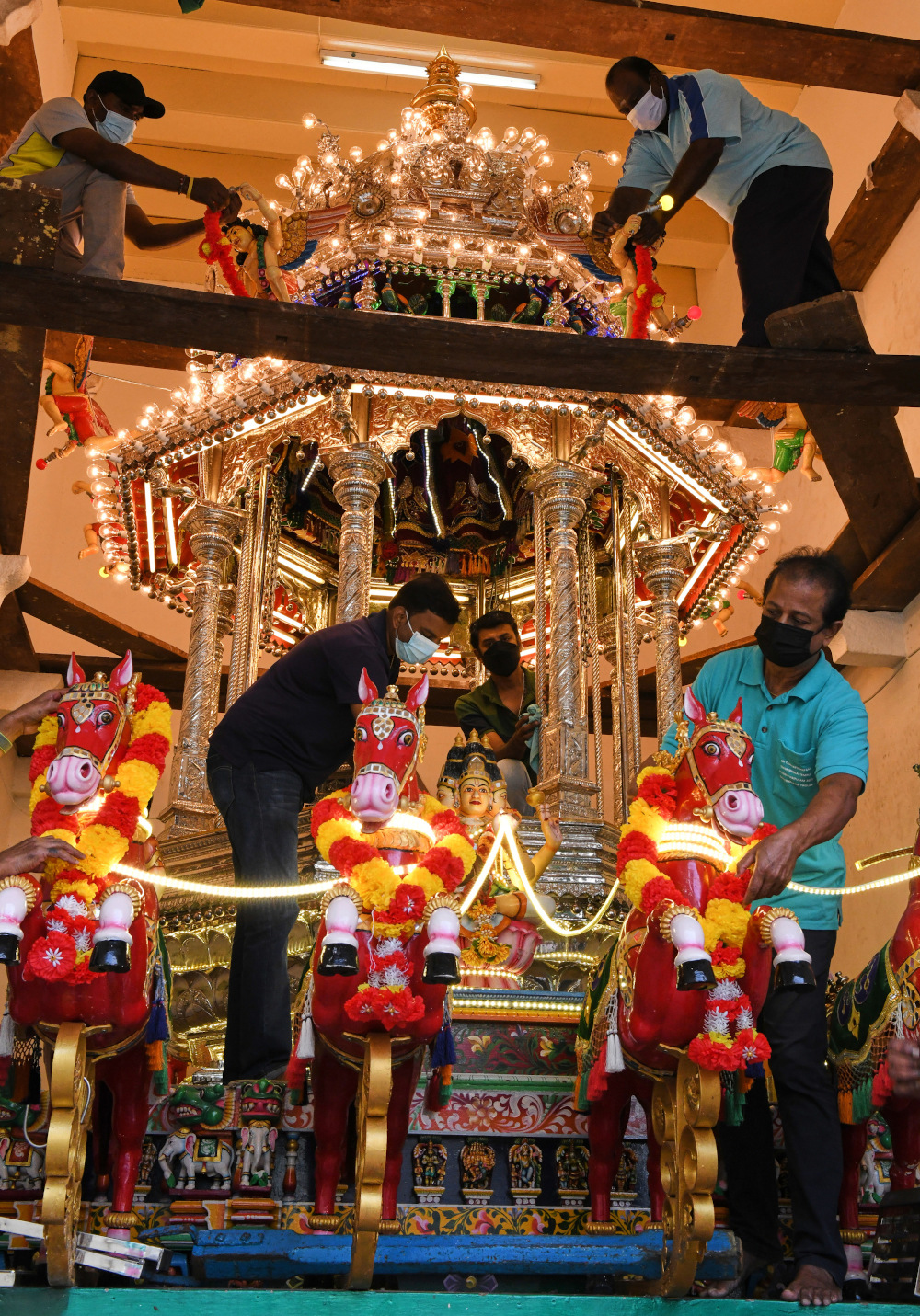 Volunteers decorate a 135-year-old chariot at the Nagarathar Thanduthabani Temple in preparation for Thaipusam in George Town January 8, 2022. — Bernama pic

Last Friday, Penang Deputy Chief Minister II, P. Ramasamy, who is also the Penang Hindu Endowment Board (PHEB) chairman, said only the ‘paal kudam’ ritual or carrying the milk pot was permitted without involving any kavadi.

In addition, other ceremonies not allowed during Thaipusam this year include the shaving of heads in temple compounds, coconut-breaking, setting up of stalls and free food distribution (thaneer panthal).