Melaka election: Who will win the hot seats?

MELAKA, Nov 18 — With less than 48 hours away, the remaining 482,549 voters of the total electorate of 495,195 will be carrying out their responsibility in the Melaka state election on Saturday and the battle for three hot seats has yet to see clear winners.

“In Tanjung Bidara, Ab Rauf and Mas Ermieyati have experience in terms of administration and politics but at the same time, they are tainted with issues such as party hopping and integrity.

“Idris may have the support of non-Malay voters from PH in Asahan but the death of Alor Gajah Umno division chief Datuk Seri Abdul Ghafaar Atan may result in sympathy votes going to BN,” he said when contacted by Bernama here today.

Idris, 55, who was Melaka chief minister for five years from 2013 was a local boy of Kampung Relau, Asahan and was also the former deputy higher education minister at the federal level when he was Tangga Batu MP.

Commenting on the chances of Mohd Rafiq in Telok Mas, Mohd Izani said the earlier seat incumbent Datuk Noor Effandi Ahmad gave way for Bersatu to set foot in the area after winning with a majority of 1,288 votes in the 14th general election.

He said Telok Mas is an Umno stronghold but the victory of Noor Effandi in GE14 may be due to protest votes from the people following the negative sentiments against Umno over the 1Malaysia Development Bhd (1MDB).

“Maybe Bersatu put Mohd Rafiq in Telok Mas so that votes for the party would remain but protest votes could spoil things and the trend can change based on the current sentiments in the campaign,” he said.

He said this is because this election is the third Sulaiman is standing in Lendu apart from the strong grassroots support and the campaign focus on continuing government projects which could only happen if he is reappointed as chief minister.

“Mohamad Ali is seen as being comfortable in Sungai Udang as it is a fixed deposit for the ruling party as there is a large military camp in the area. The incentives tabled in Budget 2022 for armed forces personnel would please such voters, I believe they would give their support to the ruling party,” he said.

He said Adly stands a good chance of defending the Bukit Katil seat he won in GE14 as he still has the aura as the former chief minister from PH apart from aggressively reaching out to voters in his campaign.

Universiti Sains Malaysia (USM) School of Social Sciences lecturer, Prof Sivamurugan Pandian expects a high turnout rate would give an advantage to BN and PH in the Melaka election.

He said at the moment, there are many factors influencing the percentage of turnout, among them, the people may feel that there is no need to hold the state election when the state government collapsed in the Covid-19 pandemic and felt it was the time for the government to prioritise the people, protest votes among them would be seen as being against the ongoing politicking and the voters are angry and disappointed with the current situation in the country.

“I would not be surprised if the voter turnout is low, giving advantage to BN and if it increased as in 2018 which was at 82 per cent, it would favour PH.

“(Nonetheless) in this context, it (voter turnout) would not achieve the rate as in 2018 and perhaps the percentage maybe far lower unless party machinery go out in large numbers to persuade voters so as not to protest against the election and support their respective parties to ensure the process of democracy is preserved,” he said. — Bernama 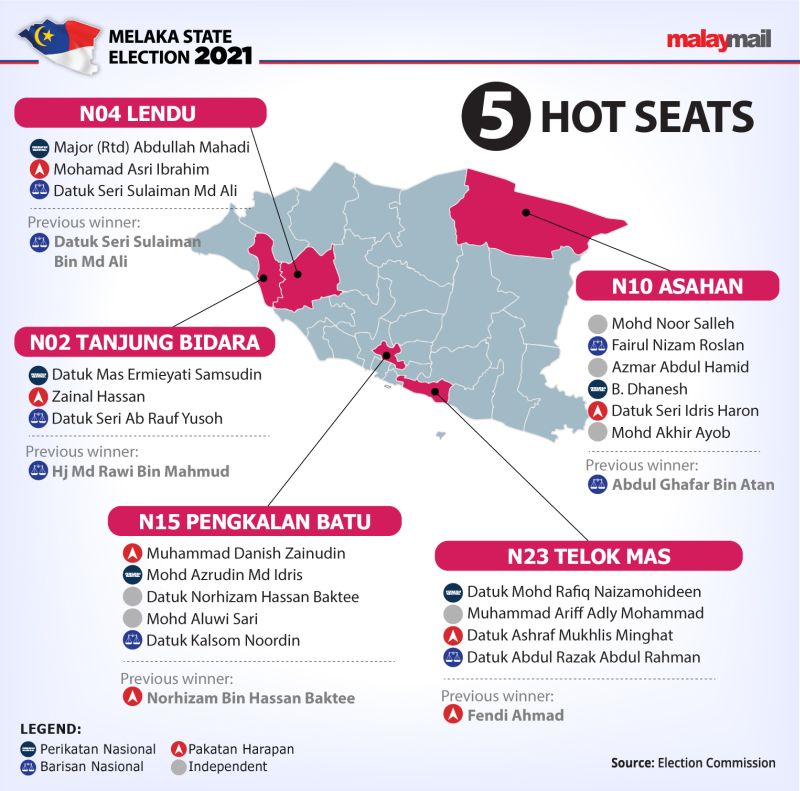