Kuala Lumpur mayor Datuk Seri Mahadi Che Ngah speaks during an interview with Malay Mail on September 30,2021. — Picture by Miera Zulyana
Follow us on Instagram, subscribe to our Telegram channel and browser alerts for the latest news you need to know.
By SOO WERN JUN

KUALA LUMPUR, Oct 25 — The Kuala Lumpur City Hall (DBKL) has assured concerned residents and NGOs that development within parts of Bukit Persekutuan will not harm the public, the environment and existing heritage building structures.

Bukit Persekutuan, formerly known as Federal Hill, a green enclave first developed by the British during the colonial era, is a low density residential area amid 18 acres of secondary forest.

Kuala Lumpur Mayor Datuk Seri Mahadi Che Ngah said there are strict regulations and other criteria that developers have to fulfill before a project is approved.

“There are regulations which need to be met by the developers while we also inspect what they are requesting, whether these proposals are in line with the planning guidelines.

“Before we made these decisions [on whether to approve the proposed projects] we have studied and analysed each area before giving an approval to the developer,” Mahadi told Malay Mail in an interview earlier this month.

The project in question involves a plot of land formerly occupied by the National Institutes of Health (NIH) — Lot PT 26, and two plots of land within Bukit Persekutuan — Lot PT 9434 and the renamed Lot 481146.

The property development will be carried out by SP Setia Berhad, which had acquired a 20-hectare plot of government land (PT 26 — location of NIH) there in a land swap deal in 2012.

In 2018, however, pressure group Selamatkan Kuala Lumpur (SKL) raised concerns about the stability of the area and if it could accommodate such a big development since the area is surrounded by heritage residential buildings which date back to the 1920s. 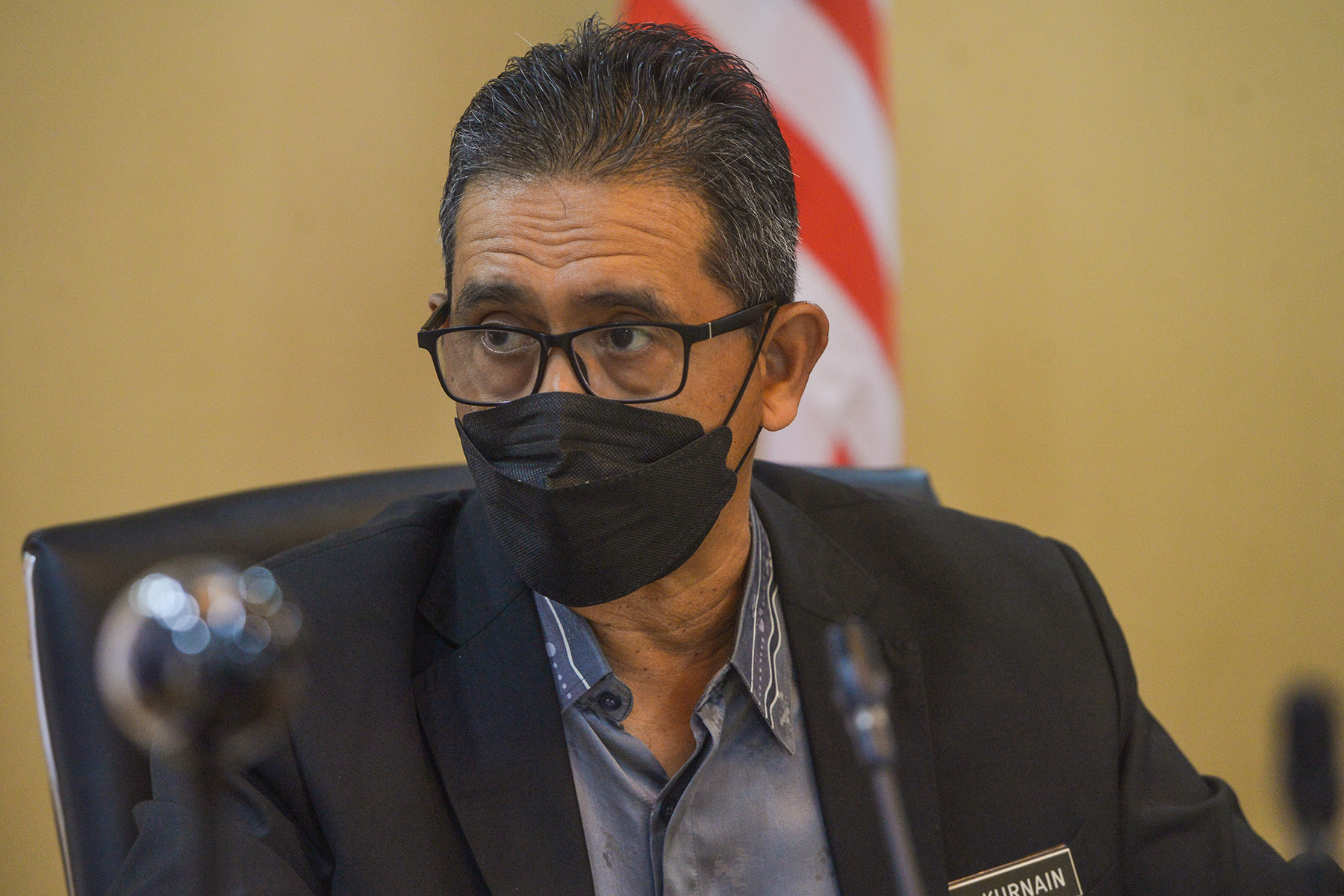 Explaining the decision behind the approvals of development projects and rezoning of PT 9434 into mixed development, DBKL’s infrastructure planning department director Datuk Zulkurnain Hassan, who was also present at the interview with the mayor, said all decisions were made after several layers of consultation and analyses of the areas in question including its surrounding infrastructure.

“When we made the new Kuala Lumpur City Plan 2020, in 2007/2008 during the drafting process we saw that there was a need to increase more public open spaces despite the many metropolitan parks which were made available previously, because we want to achieve standards set by the national municipal policy.

“We wanted to achieve a target of 20 metre per square ft/per person as the existing parks were not sufficient since our country’s population continued to grow.

“So we took note of these plots of land under the Federal Land Commissioner where they do not contribute to the public open space since they are zoned for residential purposes.

“And in that spirit we said, why not try to green this area as well since its nature was such that each house had a big plot of land that is already [green]... that is our hope,” said Zulkurnain.

Referring to the KLCP 2020, he said when DBKL was first drafting the plan, Bukit Persekutuan was marked as a public open space.

“But it does not mean that since it’s marked as such, the land is public open space.

“It is not like the Botanical Garden and Taman Titiwangsa, they are not the same,” he said.

Explaining further, Zulkurnain said later on DBKL was aware that there were many plots of land in Kuala Lumpur owned by the federal government which were projects linked to the country’s development plans.

“The federal government needed to utilise its land to support the need and costs of public facilities for the people.

“And that is why the federal government is utilising any plot of land that is suitable for this cause; for example, to build new schools or hospitals.

“When there are more people living in the city, we need to make available more facilities in line with the needs of the residents,” he said.

He added that the government cannot bear all building costs of these facilities and that is why it needed to utilise any land it has for this purpose.

This is what is happening with the Bukit Persekutuan land plots, said Zulkurnain, where its purpose is commercial so that the returns can be used to cover the cost needed to build public facilities.

Referring to the many protests launched against the development, Zulkurnain said the approval process was done following existing laws, including the changing of zoning where it was displayed publicly and offered to any stakeholders to give their opinions.

“We received objections, and we also received support for the rezoning.

“So the public hearing was conducted by a team appointed by the government where the team consisted of former DBKL town planning directors, experts in the field including academics and these were the people who made their recommendations to us.

“Despite objections raised, it was based on the team’s analysis which allowed the rezoning of PT 9434, and along with that, this team of experts had also recommended improvements that we could make on the area,” he said. 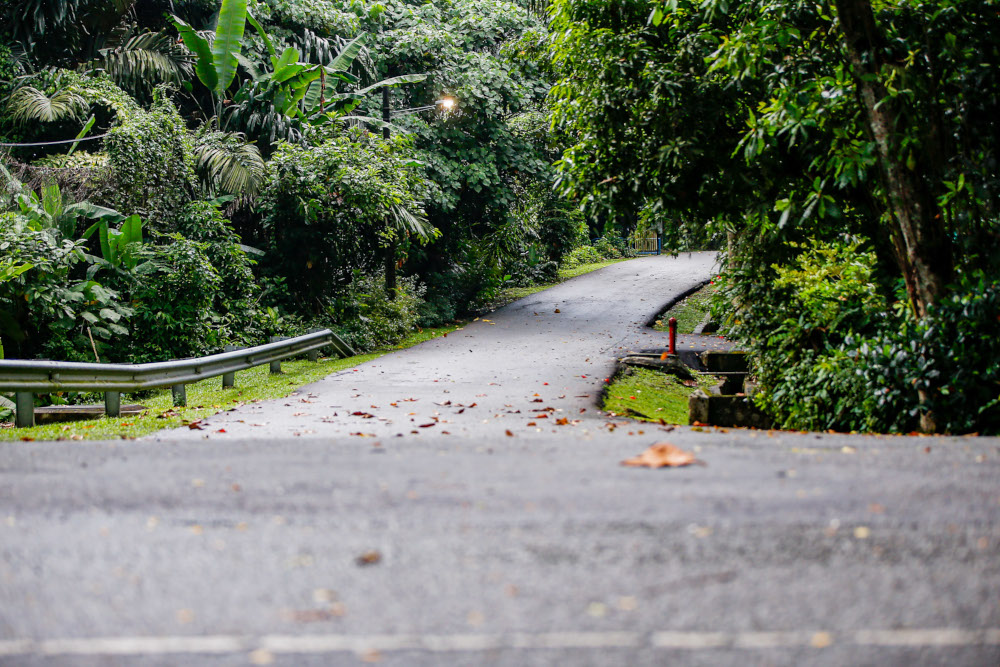 The building intensity allowed under the KLCP 2020 of this area is a plot ratio of 1:6 and it is also specified in the KLCP 2020 that development must blend with the existing surroundings.

According to Zulkurnain, DBKL’s role was to ensure that the development project abided by the specifications in the KLCP 2020.

“When we evaluate a (proposed project) building, one is according to the plan, by how far we can allow although in-line with land use, zoning and intensity.

“Then we will look at the developer’s other requests which fall under a planning guideline.

“Under the planning guideline, there is size-build area and this is the area that a developer can fill up with building structures.

Adding to this, Mahadi said, there is also a building set back, where this measurement is unique for Kuala Lumpur only and must be followed by developers.

Mahadi said other parts of the country do not follow this measurement and that it is wider than most other places.

“Another specification is the developer must agree to use only a dedicated route which goes directly into the development site and that is from Jalan Mahameru and Jalan Bangsar — in and out.

“They are not allowed to use any roads inside of Bukit Persekutuan, so there is no need to worry about this,” he said adding that the Malaysian Nature Society headquarters will not be affected, assuring once again that the environment will be protected and will not be disturbed.

In addition, the plan stated that the development and massing of building blocks on this site should be arranged and adapted to low-density residential areas and adjacent green areas to balance the existing ecology through biodiversity conservation by integrating it in future development. 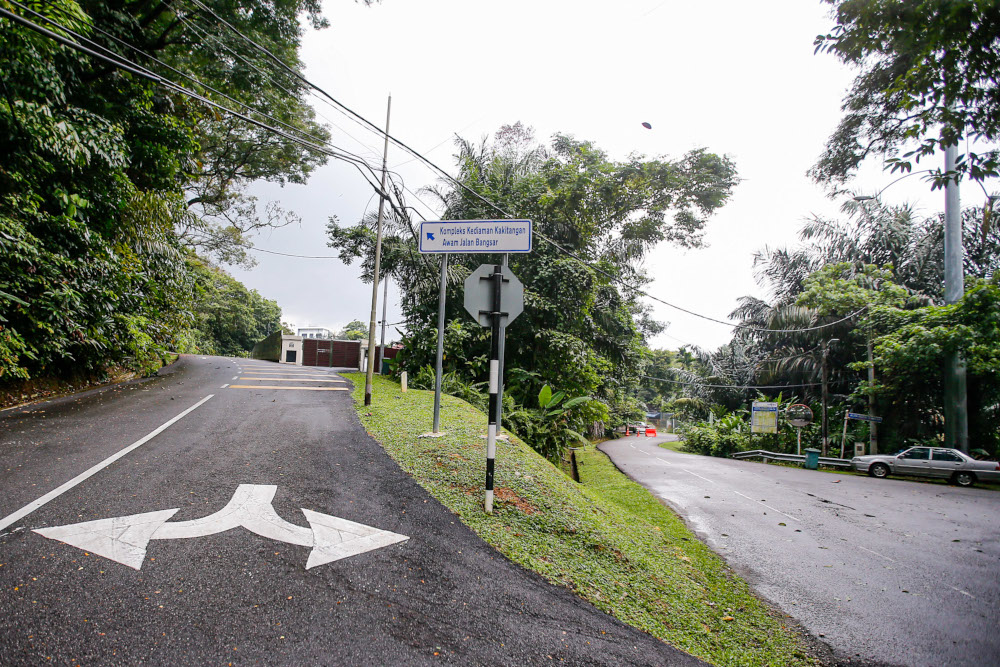 The narrow road structure within Federal Hill has been said to be unsuitable for mixed development. ― Picture by Hari Anggara

This is one issue which has been raised and is of particular concern to residents as it could lead to future disasters including soil erosion, said Zulkurnain.

However, he said there must be facts that can prove that there is in fact an underground waterway.

In this case, he said the underground waterway does not exist and this was based on the feedback from the Minerals and Geoscience Department.

“We cannot just listen to what people say about the existence of an underground waterway.

“We met with the JMG who came to brief us about this and they told us that there is no underground waterway,” he said.

Mahadi added that these matters must not be taken lightly and facts have been presented by the consultants.

“If we don’t believe in the consultants, how can we have high-rise buildings?” he said.

He added that on the carrying capacity of all the surrounding infrastructure, DBKL has ensured that assessments like traffic impact assessment were done prior to any approvals given.

“We will not approve anything if these assessments were not done, they are compulsory.

“All of these, we have gotten clearance, even the fire department has given clearance,” he said.

However, the residents’ and SKL’s concerns about possible soil erosion became reality on Saturday night.

According to a preliminary report by the Fire and Rescue Department, the soil slipped down from the shoulder of the main road along a 40-metre stretch at 7pm on Saturday.

According to the chairman of SKL Datuk M. Ali, the landslide was not a surprise as those who live there have been highlighting these incidents to DBKL.