Ipsos Survey: Malaysians trust doctors the most, politicians the least

According to a survey, doctors are the most trusted profession in Malaysia while Malaysians trust politicians the least. — IStock.com pic via AFP
Follow us on Instagram, subscribe to our Telegram channel and browser alerts for the latest news you need to know.
By ASHMAN ADAM

KUALA LUMPUR, Oct 14 ― A recent survey showed that doctors are the most trusted profession in Malaysia — surpassing teachers who held the top spot in 2019 — while Malaysians trust politicians the least.

The survey, titled Trust in Professions by market analysts Ipsos shared that doctors hold the top spot for the most trusted professions, with 68 per cent of Malaysians considering them trustworthy, followed by teachers (65 per cent), scientists (57 per cent), armed forces (52 per cent) and judges (49 per cent).

Ipsos noted that the world also trusts doctors the most.

Based on its global survey, the international market research firm said 64 per cent of people around the world considered doctors the most trustworthy profession.

Scientists come in second place with 61 per cent, and teachers in third with 55 per cent on the global scale.

“As the country grapples with getting the pandemic under control, all sections of society are forced to play a part in the recovery process. Trust is a key ingredient in facilitating a broad response, hereunder the trust ordinary people have in society’s leading professions.

“More Malaysians have been interacting with the healthcare system than ever before, and it’s reflected in doctors surpassing teachers as the most trusted profession,” Lars Erik Lie, associate director of Ipsos’s public affairs department, said in a statement on the survey findings released today. 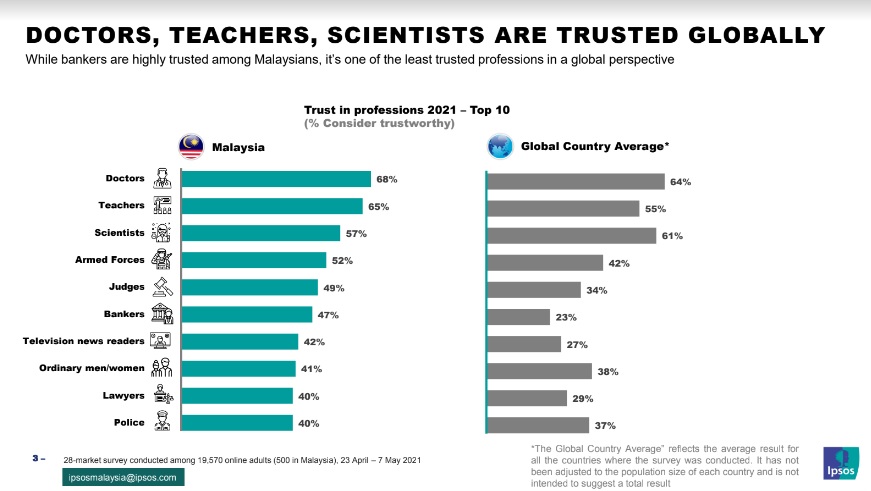 The survey also found that politicians hold the lowest trust margin among the public, with only 19 per cent of Malaysians considering them trustworthy.

The second and third lowest trusted professions are ministers at 24 per cent, and just above them, advertising executives, at 26 per cent. 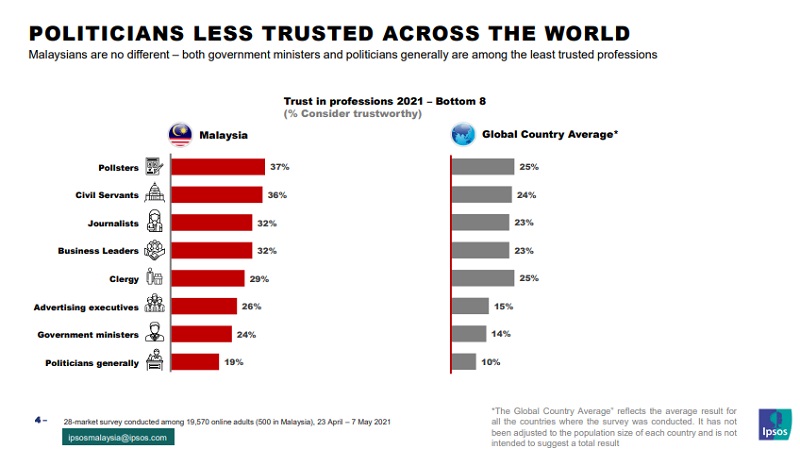 Ipsos found the Malaysian perception of its politicians being the least trustworthy profession shared by their counterparts around the world, holding a measly 10 per cent trustworthiness rating, followed by ministers with 14 per cent and advertising executives with 15 per cent.

“At the other end of the scale, politicians are the least trusted ― that’s the case across the world, as well as in Malaysia.

“Similar to health care professionals, politicians and government ministers have been visible faces throughout the pandemic, without reaping the same benefits in terms of trust in their profession,” said Lie.