How will Malaysia survive the Covid-19 economic crisis? The answer may be from lessons learned in the past

Malaysian flags are pictured in Putrajaya August 12, 2021. — Picture by Shafwan Zaidon
Follow us on Instagram, subscribe to our Telegram channel and browser alerts for the latest news you need to know.
By KEERTAN AYAMANY

KUALA LUMPUR, Sept 15 — Like most other countries, Malaysia has gone through and recovered from several financial crises, leaving a wealth of experience for its current leaders to draw from.

What everybody needs to keep in mind though is that the current economic crisis is global and of an unprecedented level.

Malay Mail spoke to two economics professors and an analyst to find out how this Covid-19 induced crisis stacks up against previous ones, and what can be learned from the past.

However, in 1997, speculation on the Thai currency caused international investors to abandon the baht, which resulted in its value plummeting.

Investor speculation then spilt over to other countries including Malaysia, Indonesia, and Singapore, causing their currencies to crash as well.

Malaysia has since experienced other economic fallouts, such as the global financial crisis of 2008 and 2009, but its effects were comparatively small, with only a drop of 1.5 per cent in GDP.

The country’s GDP contracted by 5.6 per cent in 2020 — the largest since the Asian Financial Crisis.

While noting that Malaysia’s economy has evolved over the years, making a direct comparison difficult, analyst Calvin Cheng said that the current situation is probably Malaysia's worst economic crisis in its modern history.

Cheng, who works in the Economics, Trade and Regional Integration division of think tank ISIS Malaysia, said that while the GDP contraction during the AFC was larger when compared in percentage terms, a look at the GDP contractions in terms of ringgit — at constant prices — tells a different story.

“The amount lost (in terms of constant prices) in 1998 was RM41 billion, while in 2020 it was RM79 billion,” he said, attributing the discrepancy between the figures in percentage terms and constant price terms to the fact that Malaysia’s GDP has grown since 1997.

To note, constant prices are used to measure the value of goods and services produced in a country, adjusted to the effects of inflation.

Cheng added that the labour market impact of the Covid-19 crisis is also far larger than in the AFC, with unemployment reaching a high of 5.3 per cent in May 2020.

“Not to mention how uniquely unequal the labour market impact of the Covid crisis was — with worker groups like women, youth, and lesser-educated workers disproportionately affected by the pandemic,” he said, citing research he conducted last year.

“Same goes with the budgetary impact the pandemic has had on federal government finances. The Covid crisis has caused an impact on both federal revenue, through reduced tax receipts, and higher spending because of the stimulus and health crisis,” he said.

To curb the Covid-19 health crises and revive the economy, the government has spent a total of RM530 billion in stimulus packages. Of this, Cheng said RM83 billion was fiscal stimulus, which works out to about 5.8 per cent of Malaysia’s current GDP.

In comparison, during the Asian Financial Crisis, the government announced a RM2 billion fiscal stimulus package, amounting to some 1.5 per cent of the GDP at the time.

Can a rebound be expected, based on Malaysia’s past economic recoveries? 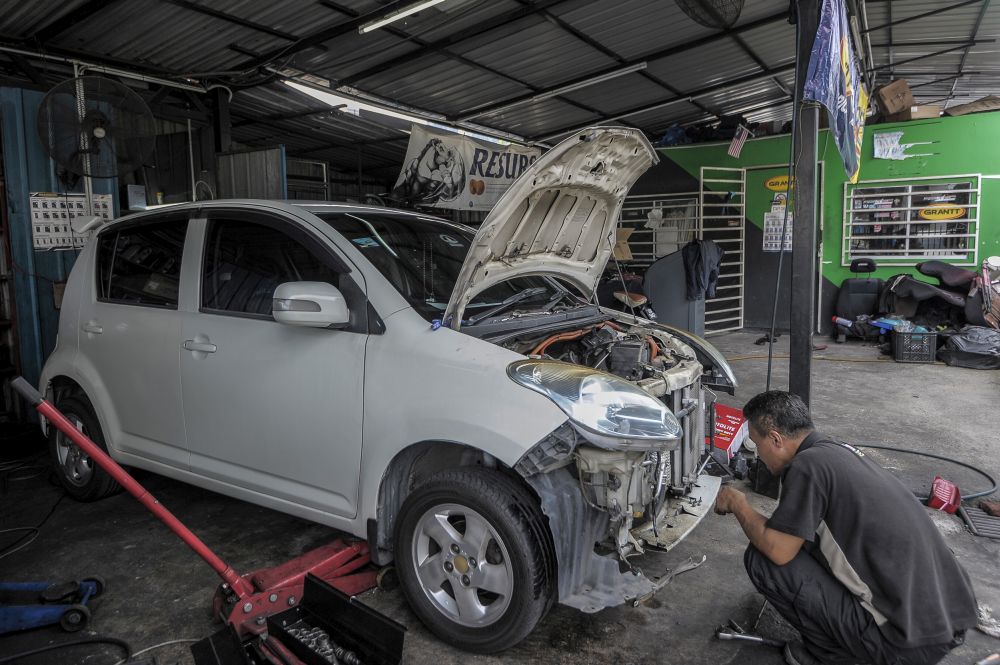 A mechanic repairs a car at his workshop in Kuala Lumpur April 14, 2020. — Picture by Shafwan Zaidon

Cheng said that Malaysia could recover at the “macro-level” — in terms of GDP — to pre-pandemic levels by early-2022. However, he said the scars from the pandemic will be far longer lasting.

“The labour market impact of the Covid crisis on the employment and labour market participation of younger, female, and lesser-educated workers may take years.

“The poverty and inequality impact of Covid may take far longer than 2022 to recover.

Likewise with other things like the time it will take for the federal government to rebuild fiscal buffers and increase fiscal sustainability,” he said.

“While the Asian Financial Crisis and the Global Financial Crisis caused a deflation and contraction in GDP, apart from that the Covid-19 pandemic crisis is different, as this crisis seriously discourages economic activity and an end to the virus's mutations is not in sight,” he said.

“Governments still have little clue of when it will relent and how it will unfold as countries continue to experience new surges in cases and deaths with new and more deadly variants.

“Even if we manage to take control of the virus, since Malaysia is a highly trade and tourism dependent country so it will be impossible to contain its return into the country,” he added.

Lessons to be learnt 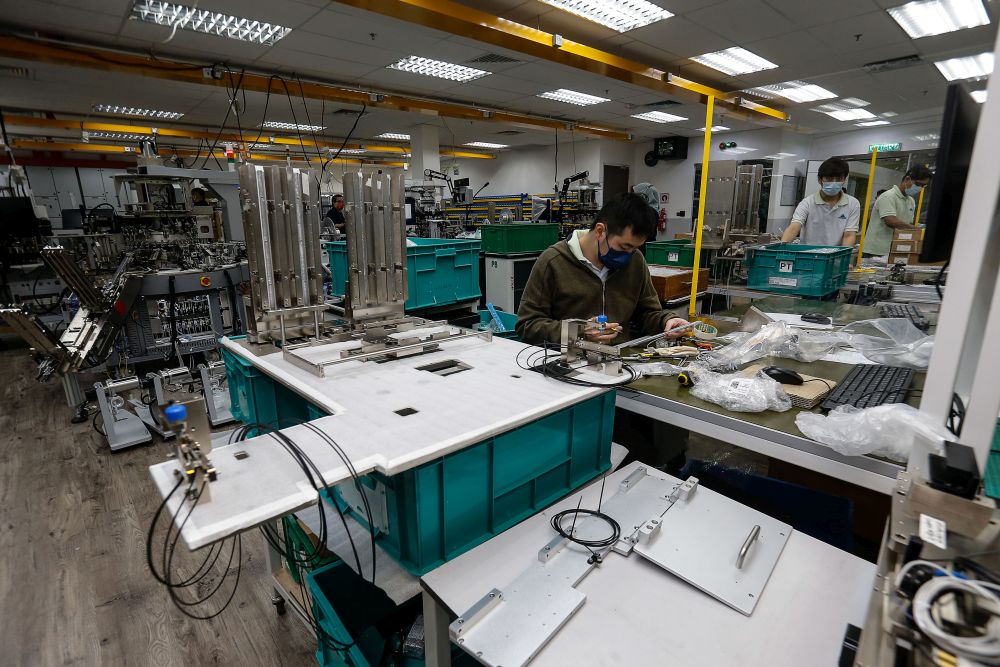 Workers are pictured at their stations at Pentamaster Corporation Bhd in Bayan Lepas July 6, 2021. — Picture by Sayuti Zainudin

The first lesson is that “counter-cyclical” government spending remains a tried and true way to safeguard the welfare of the public during an economic crisis, said Cheng.

He noted that an increase in government spending during past and current crises has been pivotal in reducing both short-term impact to the public, and long-term impact to the structure of the economy — such as in the areas of unemployment and wage loss.

“Currently many of the policies are in the right place. The multi-pronged focus on restoring macroeconomic growth, supporting the welfare of the public, and investing in the future — through digitalisation and productivity-enhancing infrastructure — is a great start,” he said.

Rajah agreed, saying the federal government should maximise on what it knows will work and called for increased government expenditure to help the many disadvantaged people from falling through the cracks of its current stimulus packages.

Universiti Tun Abdul Razak economist Prof Emeritus Dr Barjoyai Bardai said Malaysia can look towards strategies employed by other nations in the aftermath of the AFC.

He suggested that Malaysia, like South Korea at the time, prioritise the development of human capital.

Throughout the 1970s and onwards, South Korea took to developing its education system. This nurtured the human capital in the country, facilitating the advancement of its manufacturing industries such as in textile products, steel, and automobiles.

Barjoyai added that Malaysia’s economy and ability to rebound from previous recessions was too dependent on foreign direct investments, and like Hong Kong in the post-AFC era, needs to build up local businesses and a “spirit of entrepreneurship.”

“In the short term, Malaysia seemed to have not been as badly affected by the AFC as other countries, but from that point onwards we have been left behind by countries such as South Korea and Hong Kong,”

“Although initially they generated slower productivity growth, after two or three years, it was discovered that the productivity of these human resources economies was much higher than economies dependent on capital growth,” he said.

He added that moving forward, a focus on development of Malaysians capable of working with new technologies — such as robotics and artificial intelligence — would greatly benefit the nation’s productivity, especially since Malaysia is a significant manufacturer of computing chips.