Healthcare workers collect swab samples to test for Covid-19 at the Selcare Clinic in Shah Alam June 24, 2021. — Picture by Miera Zulyana
Follow us on Instagram, subscribe to our Telegram channel and browser alerts for the latest news you need to know.
By JERRY CHOONG

The state or territory with the lowest number of cases is Labuan with five cases, followed by Putrajaya with 48 cases and Perlis with 98 cases.

“The remaining 22,129 cases or 97.9 per cent fall in the Categories of One and Two, based on the developing clinical conditions when first diagnosed.

“Overall, 17,345 cases or 76.8 per cent of today’s reported figures consist of individuals who have not been vaccinated or only partially vaccinated,” Dr Noor Hisham said.

“The ministry has also detected the emergence of 36 new clusters today, bringing the total number of clusters in the country to 4,647.

The states with the highest number of clusters include Selangor and Johor with seven respectively, followed by Kelantan with six, Pahang and Sarawak with four respectively, KL Federal Territory with three, Perak and Sabah with two respectively, and Penang with one.

The 36 clusters today include 23 related to workplaces, 12 related to communities, and one related to high-risk groups.

Recoveries from Covid-19 stand at 19,492 for today, bringing the total number of recoveries in Malaysia to approximately 1,401,160, or 83.1 per cent of all cumulative cases.

The number of cases being treated in intensive care units for today is 986, of which 451 require breathing assistance.

The ministry also recorded 252 fatalities from Covid-19 today, bringing the total number of deaths in the country to 15,802 cases, or 0.94 per cent of all cumulative deaths from Covid-19.

The fatalities include 91 in Selangor, 46 in Johor, 26 in KL Federal Territory, 18 in Kedah, 17 in Sabah and Penang respectively, 13 in Melaka, seven in Perak, six in Pahang, five in Sarawak, three in Negri Sembilan, two in Kelantan and one in Perlis. 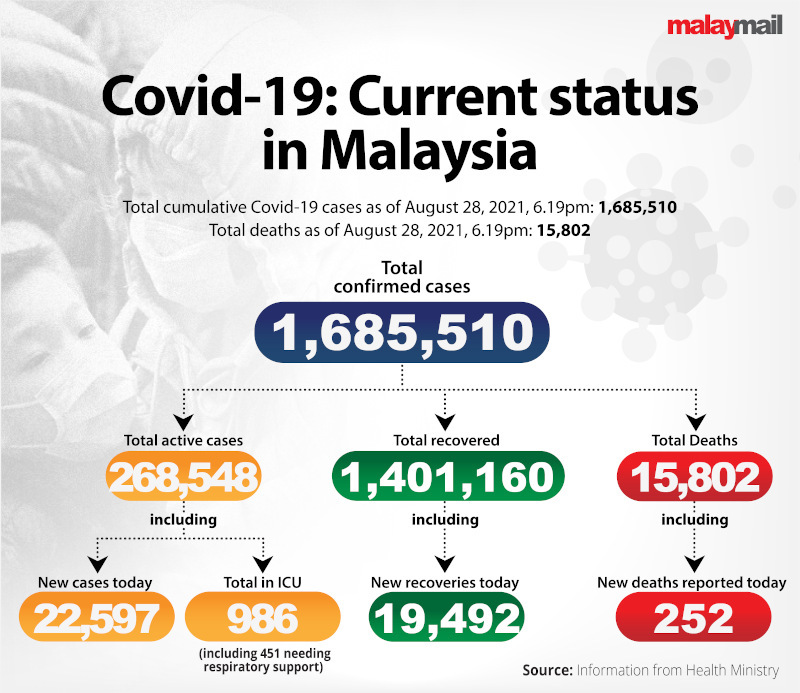