Patrons pack food to go at mixed-rice restaurant T23 at USJ 10, Subang Jaya August 25, 2021. — Picture by Shafwan Zaidon
Follow us on Instagram, subscribe to our Telegram channel and browser alerts for the latest news you need to know.
By SHAHRIN AIZAT NOORSHAHRIZAM AND JERRY CHOONG

KUALA LUMPUR, Aug 27 — More than a week since the government permitted fully-vaccinated patrons to dine-in at eateries and restaurants, the reception by operators in the Klang Valley has been mixed.

Some decided to slowly reopen their premises, even as crowds are yet to resume their pre-Covid 19 levels, while others outright refused to allow dine-in, fearing the possible spread of Covid-19 among staff and customers.

On August 19, then-caretaker prime minister Tan Sri Muhyiddin Yassin announced that fully-vaccinated individuals in states under Phase One of the National Recovery Plan will be allowed to dine-in at eateries, visit night markets, as well as engage outdoor individual and non-contact sports, among others.

This effectively meant dine-ins were permitted for the fully vaccinated nationwide.

For Asian fusion cuisine themed cafe in the middle of SS15 in Subang Jaya, Selangor, 30 year-old Rasa Lama barista Ismail Ali said that it was better to take precautions as Malaysia’s surging number of daily Covid-19 cases was still worrying.

Yesterday, Malaysia reported new records for both new cases and Covid-19 deaths in a day. 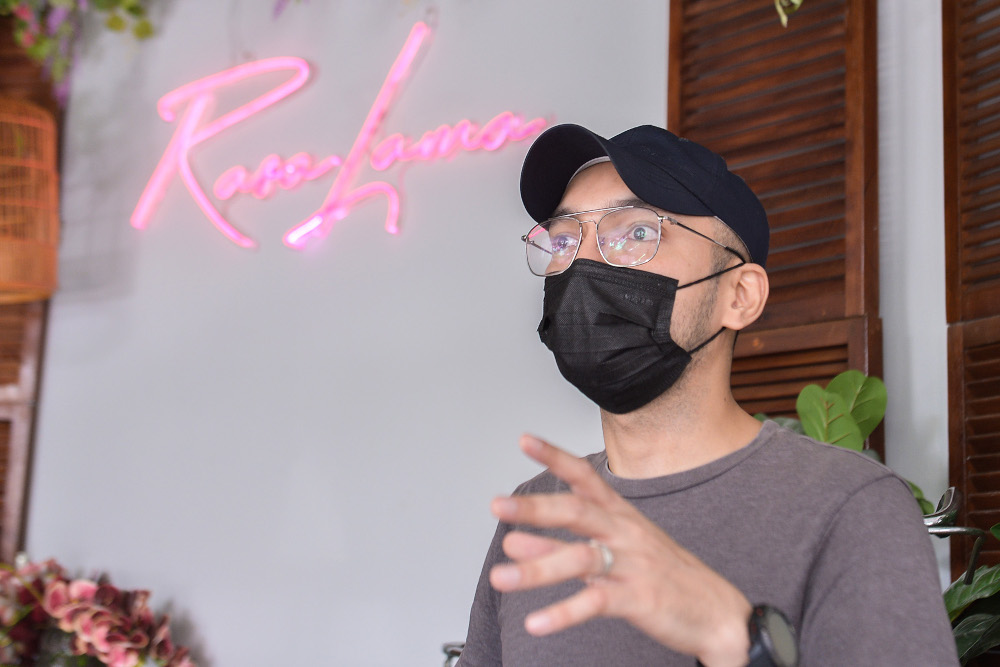 Ismail told Malay Mail that one of his staff contracted Covid-19 two weeks ago and was still observing a home surveillance order (HSO).

“Actually one of our staff got infected two weeks ago and he is still observing his quarantine period. And our customers actually prefer to take away their food due to the current number of cases around the neighborhood.

“Despite that we are still considering opening for dine-in but until then we focus on our current promotions and deals to keep attracting customers to taste our food,” he said.

In USJ 10 of Subang Jaya, just over half of the restaurants and eateries observed only allowed for take-aways. Those that allowed for dine-ins insisted that patrons be fully vaccinated and must wear masks on their premises at all times.

One such outlet is economy rice outlet T23. Its manager Jack Wan, 30, said the management still refused to allow patrons to dine-in for the time being.

“We are still limiting it to take-away. Customers can come in and make the selection of what they want, but are not allowed to even sit down and wait their turn,” he told Malay Mail. 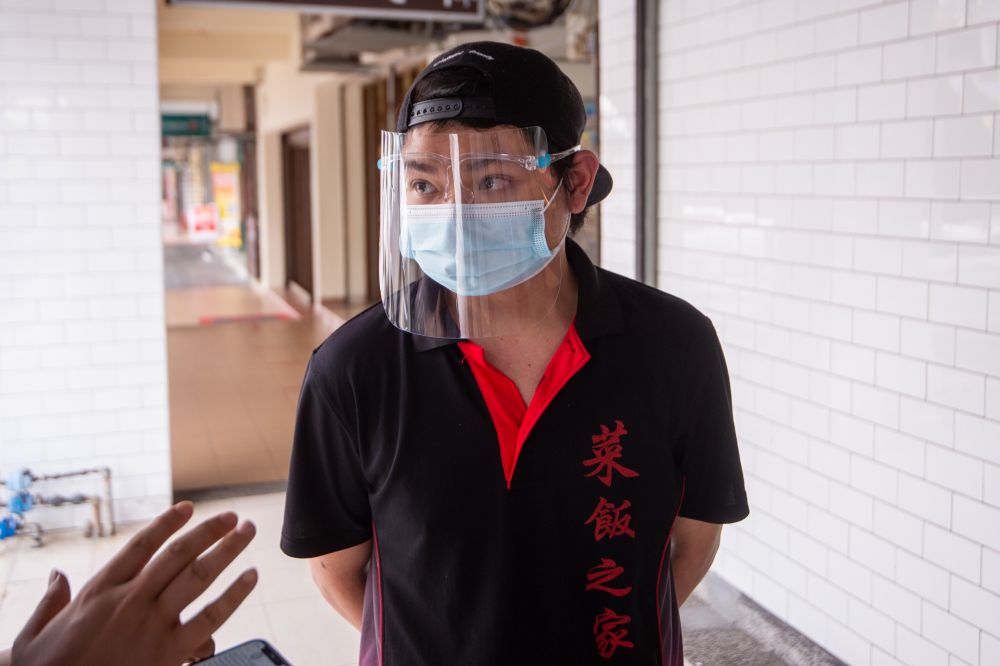 Despite this limitation, the restaurant that sells steamed rice with a selection of dishes appears to be well patronised, based on the queue outside.

“It was discussed before (on opening for dine-in) but my bosses eventually decided that we cannot afford the possibility of a Covid-19 outbreak on the premises, despite the fact that all the staff and myself have been fully vaccinated.

“In the time since we were forced to rely on only take-aways, business has been somewhat affected. On average about 50 or so customers come by, but this all depends as on some days it is higher and on others it is much lower,” Wan said.

However, famous for shisha and night ambience in SS15, Canai Cafe owner Datuk Johari Abdullah said that the restaurant opened for dine-in since Monday (August 23) and has seen crowds heading back to his place.

He echoed the Rasa Lama barista on customers’ hesitation towards dining in due to the number of new infections and the government’s regulations that only allow two people per-table. 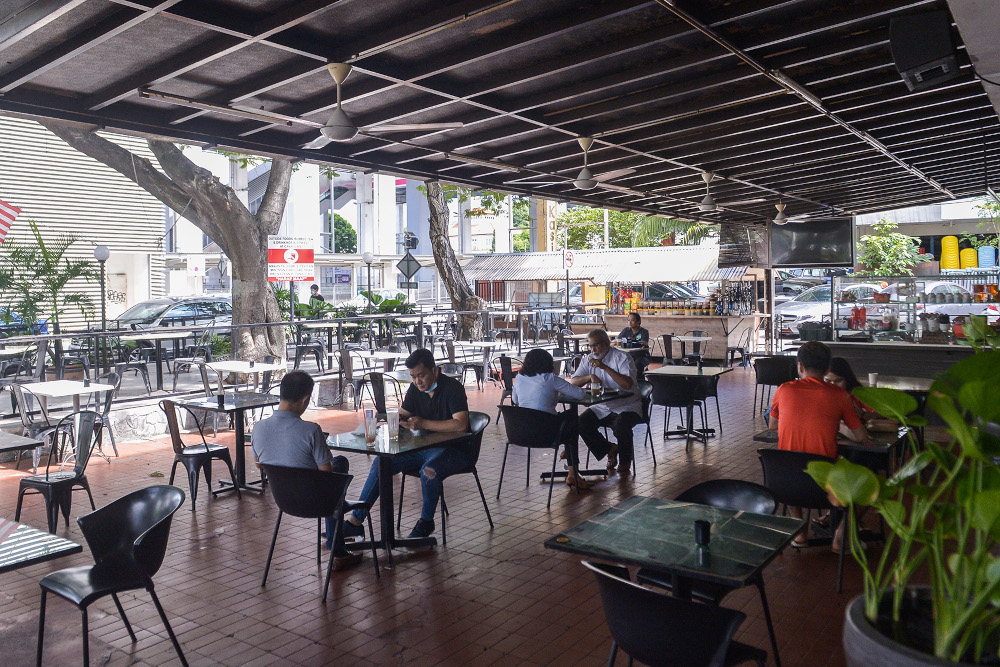 People dine-in at Canai Cafe during Phase One of the National Recovery Plan in SS15, Subang Jaya, August 25,2021. — Picture by Miera Zulyana

“Sometimes it’s not about the food, it’s the people hanging out, catching up with friends and talking about their life.

“This place used to be filled with stories from different kind of people and now it feels like an empty vessel,” he told Malay Mail.

He said he hoped the government would extend the mandatory closing time to 1am daily so that he can get his customers back to spend their nightlife at his restaurant.

For Urban Daybreak, a cafe that serves breakfast and brunch in Jalan Telawi, Bangsar here, owner 29-year-old Jeremy Teo emphasised that he made sure that his staff were fully vaccinated before they were allowed to be in the restaurant. 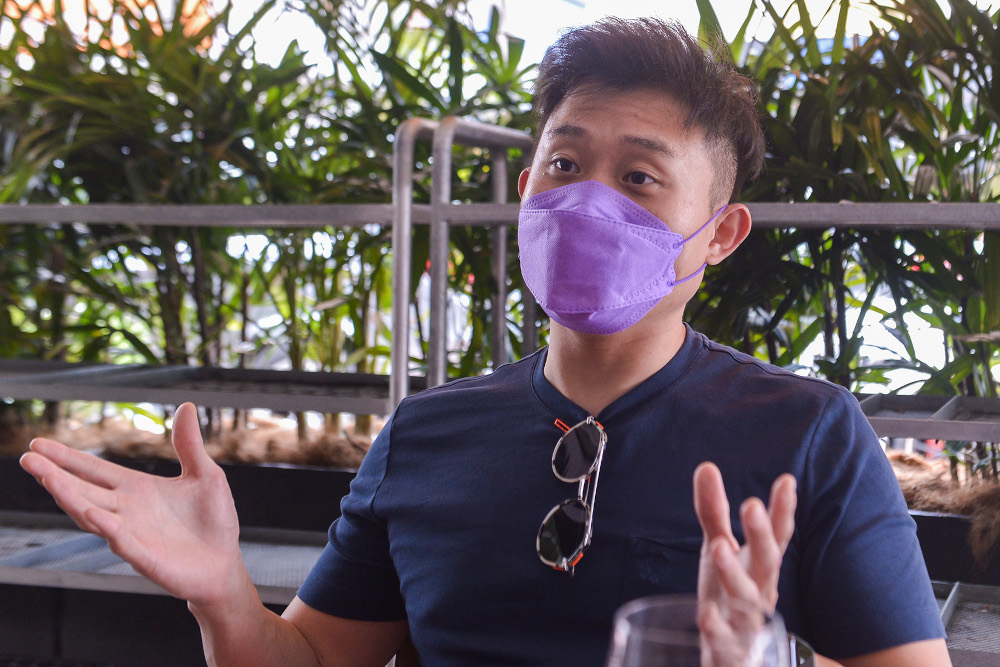 Teo has told his staff to register for the AstraZeneca vaccine that was made available through MySejahtera in order to gear up the restaurant again.

“We opened for dine-in since August 17 because 95 per cent of our staff are fully vaccinated except for one that has only got one dose.

“So when we heard that AstraZeneca is available, I pushed my staff to register for it in order to get our business running again so that we have enough manpower to operate the cafe,” he said.

Similarly, the Super Kitchen Chili Pan Mee restaurant in USJ 10 allows patrons to dine-in. Its manager Allan Khoo, 27, said yesterday was the first day of his outlet permitting them to do so.

“So far we have not seen the same number of customers coming in to eat, as we did prior to Covid-19. Most still prefer take-aways, but that is understandable given how things are. 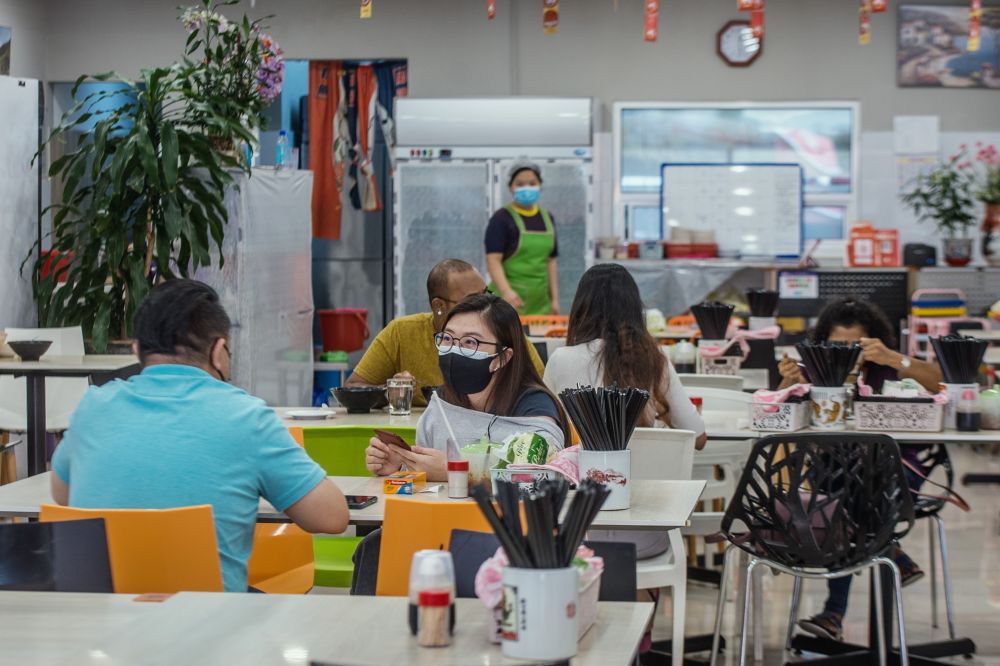 Super Kitchen Chili Pan Mee has seen a steady flow of customers who have opted to dine-in at the restaurant located in USJ 10, Subang Jaya. — Picture by Shafwan Zaidon

“Those who I spoke to throughout today, have said they are quite pleased at being able to dine-in again. Since we sell noodle dishes, many would rather have it fresh and hot, as compared to take-aways which are already somewhat lukewarm by the time it reaches you,” he said.

Khoo added that he took to asking their patrons, who came to the outlet to pick up their orders, over the past several days as to whether they would prefer eating in or taking away.

“Over half of them declined to dine-in outright as it is too risky, even though they admitted it is a better option. To them, catching Covid-19 and the consequences thereof far outweigh the simple pleasure of being able to have your meal served fresh.

“All the same, I note that we have seen an increase in our revenue on the first day of allowing dine-in, by as much as 20 per cent. So you could say it is a matter of counting small blessings, since it helps us to get by,” he said.