The crowd took up the entire length of Jalan Tun Perak below the Masjid Jamed LRT Station. ― Pictures by Shafwan Zaidon
Follow us on Instagram, subscribe to our Telegram channel and browser alerts for the latest news you need to know.
By R. LOHESWAR

KUALA LUMPUR, July 31 — Hundreds of people consisting mainly of Malaysian youth gathered in the heart of Kuala Lumpur today to take part in the #Lawan protest.

In the morning, the crowd, which was sparse initially, grew significantly by 10.45am, and by 11am, the entire length of Jalan Tun Perak below the Masjid Jamed LRT Station was packed.

As protestors began to make their way slowly towards Dataran Merdeka, they were stopped by the police who said they were not allowed to enter the historic square.

After some discussion, the police appeared to back down, but soon after, the protestors were still barred from entry, so they sat on the main road and began chanting while holding posters and banners aloft.

Some also brought mock corpses wrapped in kapan cloth to symbolise the high number of daily deaths from Covid-19 in Malaysia as well as the country’s collapsing healthcare system.

SSR organised several small protests previously, including the “Black Flag” protest at Dataran Merdeka on July 17 and a vehicle convoy on July 24.

According to Asraf, the protestors were meant to move into Dataran Merdeka which would have made social distancing easy.

“A bit disappointed with the police for not allowing us in. Dataran Merdeka is a public place and belongs to the people.

“It made things difficult since many turned up. However, despite all that, we still managed to adhere to the SOPs and conduct ourselves properly,” he told Malay Mail. 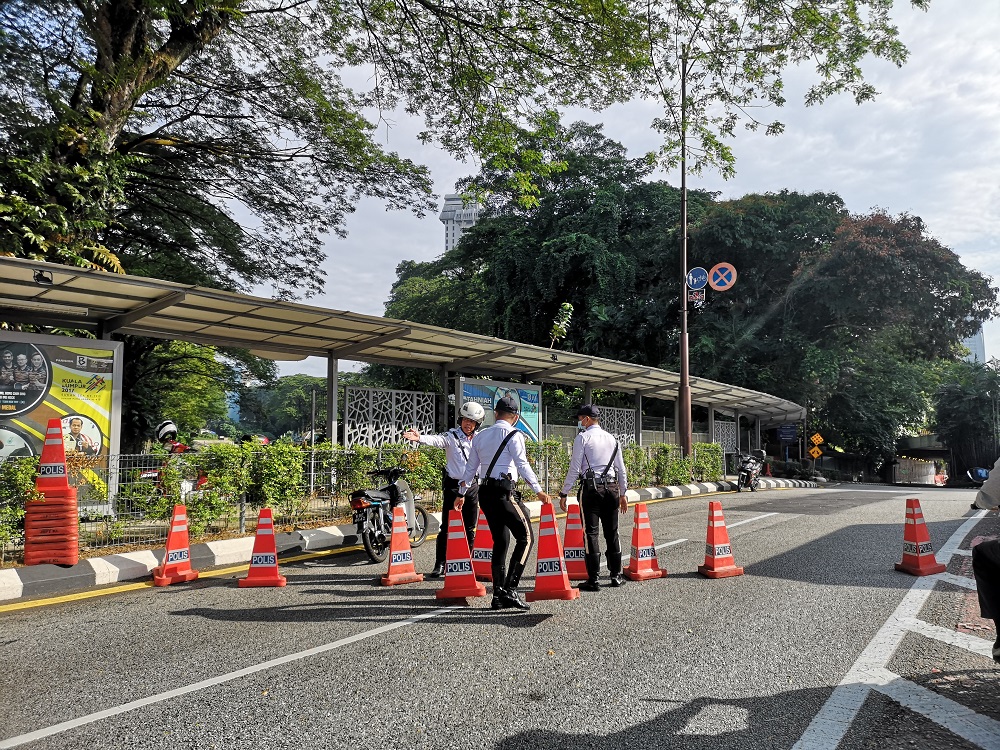 Police personnel set up a road block at the road leading to Dataran Merdeka in Kuala Lumpur July 31, 2021.

Asraf said SSR was satisfied with the turnout and vowed that the youth of the nation will continue to fight for justice and call for Prime Minister Tan Sri Muhyiddin Yassin and his Cabinet to resign.

He said he and his associates have been questioned countless times by the police in the past week but will not relent in their pursuit of justice.

“We’re proud of the turnout today. It shows that young people are willing to stand up for what’s right.

“My colleagues and I have been questioned by the police separately more than 30 times since last Thursday.

“Despite these intimidation tactics, us youth will not give up. We will continue to criticise and reject this government regardless of its political affiliations,” he said.

As for a response, Asraf said SSR will discuss what to do next if nothing changes after today without elaborating further.