A GrabFood rider picks up his customer’s groceries at the Chowrasta Market in George Town May 11, 2021. — Picture by Sayuti Zainudin
Follow us on Instagram, subscribe to our Telegram channel and browser alerts for the latest news you need to know.

Earlier this week, Socso announced that over 145,000 delivery riders employed by Grab and Foodpanda now have social security under the SPS-Lindung scheme, with the cost to be fully borne by Putrajaya.

Klang MP Charles Santiago was among those who criticised the move. The DAP leader likened the Socso subsidy to condoning gig work’s exploitative nature, citing the industry’s tendency to avoid paying for social protection by keeping employment informal.

“The issue here is about the need to provide a social protection mechanism for these workers and that involves giving them EPF, Socso and EIS,” Charles said.

EPF stands for the Employees Provident Fund while EIS refers to the Employment Insurance Scheme.

“That’s the exploitative nature of informal work in that companies can avoid paying them.

“But in times of crisis the government needs to put its foot down and do something about it because they should be thinking about the interest of the workers,” Charles added.

Grab and Foodpanda together currently employ over 140,000 riders but none are considered full-time workers.

All over the world, labour rights groups have mounted suits to push for laws that would recognise gig work as formal employment and compel these “middle-men” service providers to pay for social benefits.

In Malaysia, more lawmakers have called for the gig economy to be regulated. Among them is Charles, who said legislation is needed to protect gig workers and prevent firms like Grab and Foodpanda from avoiding its social obligation. 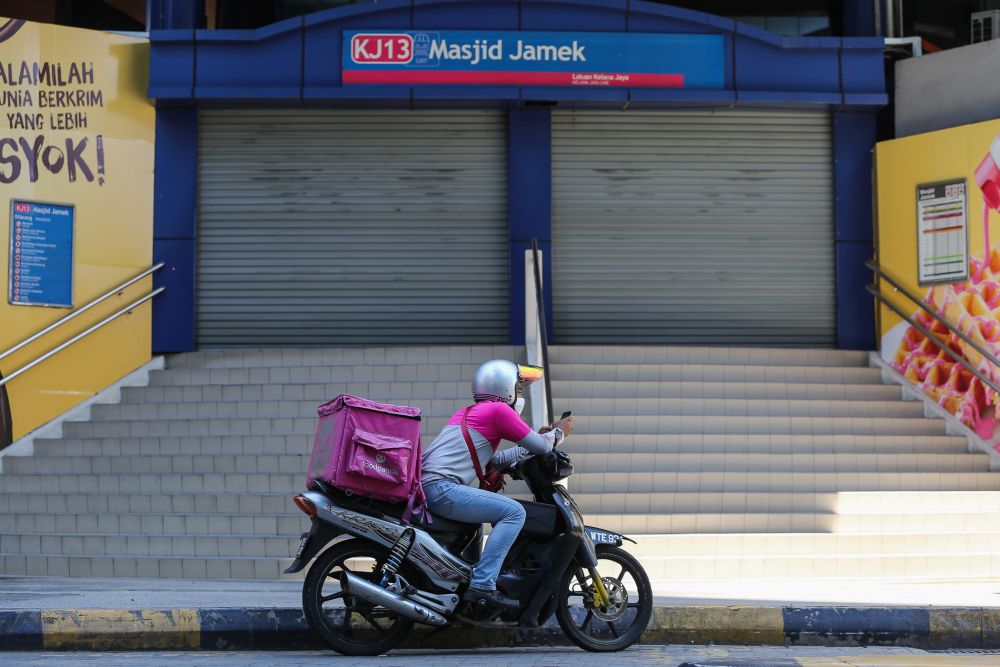 A Foodpanda rider idles in front of the Masjid Jamek LRT station in Kuala Lumpur on day eight of the movement control order March 25, 2020. — Picture by Yusof Mat Isa

Several progressive economists have also thrown their support behind the call.

Nungsari Ahmad Radhi, a former chairman of the federally-funded think-tank Khazanah Research Institute, was critical of the government’s move to subsidise the Socso contribution, echoing Charles’ view that it underscored the urgent need to regulate gig work.

The economist suggested Grab and Foodpanda were able to evade paying social security because policymakers have failed to act in the interest of workers.

“By right policymakers should have squeezed their brains to think of a solution. Because the numbers are large in human terms (being exploited in my view) and numbers are large too in terms of profits to shareholders,” Nungsari added.

Both the companies are valued at over US$5 billion (RM20 billion). Grab, the company behind the “super app” with operations in Malaysia, Singapore, Thailand, Vietnam and Indonesia, posted US$12.5 billion (RM50 billion) in earnings for 2020 as the South-east Asian region battled Covid-19.

Since their arrival, government lawmakers have hailed these tech companies as a quick solution for the soaring unemployment rate in the pandemic era.

Food delivery and ride-sharing services were also seen as the answer to depressed quality job growth before the coronavirus crisis.

Both the views have been widely criticised by economists

“Yes, they’re innovative and create jobs, but what jobs? Mostly low-paid jobs as employees and lots and lots of platform users,” Nungsari said.

Grab or Foodpanda did not issue a statement about the Perkeso subsidies. The companies have also responded to calls for regulation by claiming to offer workers flexibility even as several surveys on informal work found that most gig workers prefer stable jobs.