PUCHONG, June 27 — The vegetables we eat and where we get them from can be a quagmire of questions: Is it organic? Local or imported? Is it safe? Is it fresh?

Getting your daily intake of healthy greens shouldn’t be this stressful, I reckon.

Enter The Vegetable Co. This fledgling harvest-to-table startup was launched early last year and is based on sustainable vertical farming concepts and in-house, customised technology. 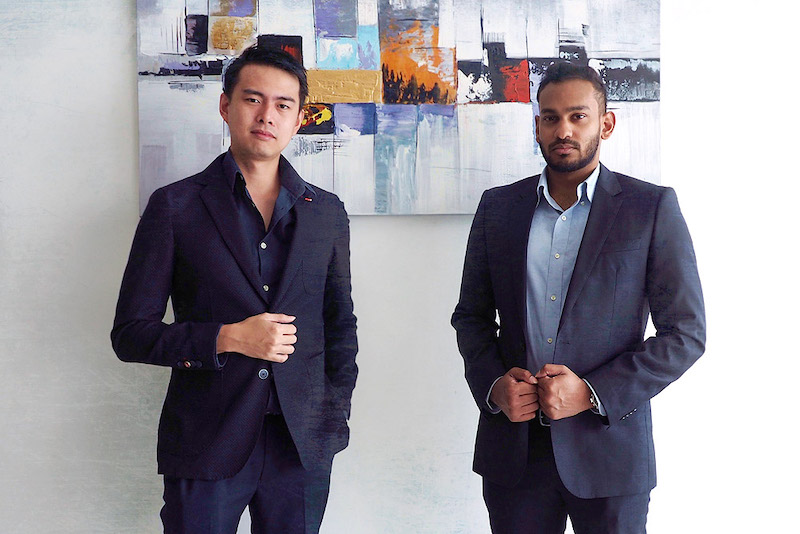 The brainchild of founders Shawn Ng, 28, and Sha G.P., 27, The Vegetable Co. aims to deliver fresh greens within three to four hours after harvest to their customers in various parts of Klang Valley.

Quality is a major differentiator. Ng explains, “Our vegetables are meant to be better than what’s available in the market due to their freshness and growing method. The indoor farming method ensures that they are delicious and pesticide-free while still reaching optimal size, taste and nutritional value.”

Through their Controlled-Environment Agriculture farming method, the startup has devised and built an indoor, environment-controlled chamber that saves significantly on land and water consumption.

Ng adds, “The chamber is also an isolated environment, which prevents external contaminants from entering and as such mitigates the need for pesticide usage. Basically, we are farmers in lab coats, or plant scientists. Our aim is to grow food in the best possible environment to get the most nutrition and freshness onto your table.”

As with many startups, The Vegetable Co.’s overall ambitions and strategy are heavily influenced by the founders. The duo first met when they were doing their A-levels, and have been friends for well over a decade.

This meant they understood each other’s strengths and differences — Sha has a BSc in Economics from The University of Manchester while Ng received a Masters in Green Management and Sustainability from the University of Bocconi in Italy — and how best to complement each other.

Ng recalls, “Since college, we have always been young idealists who spent countless nights debating on the many ways in which we could contribute to the nation’s development. Generally, Sha is always pragmatic in nature, while I’m a bit of an optimist who dreams of a better future for the Malaysian people.”

Therefore, unlike many businesses that are driven solely by profit making, the two friends started their venture due to their burning need to drive change in a significant and tangible manner.

A sense of purpose was crucial, as Ng observes: “We both had work experiences prior to this, and they never fully aligned to our overarching goals and principles. By working on the business, we were given the opportunity to pursue and craft our own paths forward.”

Loyal customers have the 2015 film The Martian to thank. Ng explains, “It really intrigued Sha as the astronaut had to find a way to grow food in an extreme environment to survive. He began considering whether it could be feasible and commercially viable in the Malaysian context. He approached me with the idea, and the rest is history.”

Assembling their team was another piece of the puzzle they had to solve early on.

Ng says, “One of our most important hires remains our first farm operator, Bryan Lee. We hired him back in late 2019 when he was 19, and he has been with us since. Combining his love for plants with his mechanical and electrical engineering skills has made him essential for the work here, especially during the early stages.”

Plenty of care is taken in growing the vegetables, with the latest vertical farming technology. — Picture courtesy of The Vegetable Co.

The Vegetable Co. also has an in-house Research & Technology team — comprising young Malaysians below the age of 30 from varying backgrounds — working to optimise their automated systems, fit-for-purpose farm designs, as well as the quality and nutritional value of their produce.

That last attribute, Ng notes, is a crucial factor to market acceptance: “Our customers can smell the fragrance of the basil when they first open the box. This, combined with the springiness of our lettuce, really drives a good impression on people.”

The key to the freshness of their produce lies in their harvest-to-table approach, typically within a three- to four-hour window.

Ng explains, “Our intention is to move away from mass industrial agriculture and long supply chains. Research has shown that vegetables travelling far distances tend to lose nutritional value over time, some as fast as within 48 hours. There are also the concerns of food waste, as a third of all food stuff is usually discarded in the beginning, generating methane through open decomposition and exacerbating climate change.”

As a result, The Vegetable Co. strives to grow within 20 kilometres of high populated districts within the Klang Valley, such as Kuala Lumpur, Petaling Jaya, Subang, Puchong, and Shah Alam.

In doing so, Ng claims this will help preserve the maximum nutrients possible, cut down on transport emissions and increase transparency as they minimise the number of unknown variables between the farm and the consumers.

He adds, “During the past year, we also observed interruptions in supply and knee-jerk reaction price hikes due to inter-state logistical issues associated with Covid-19 restrictions and we believe our solution helps address these challenges by farming right in the middle of population centres.”

By growing in vertical stacks within urban areas, The Vegetable Co. purportedly mitigates around 95 times the land use through conventional farming methods. In the future, the duo also plans to activate unused urban spaces to further increase land use efficiency.

Given the constraints of each individual farm being able to only service a certain radius around it, The Vegetable Co. will leverage both localisation and decentralisation to scale up in a sustainable manner.

Ng explains, “The modularity of our farms enables us to install farms in every urban centre where there is demand. This is how we envision the growth of our company and the vertical farming sector here in Malaysia.

Sounds like a reasonable and promising business model, no? But as any seasoned entrepreneur would tell you, the journey is never a smooth nor swift one.

The Vegetable Co. was self-funded by the two co-founders at the beginning. Ng says, “We really had to dig deep into our coffers and commit all our resources into the start of the company — scraping for whatever savings or equipment we have in order to make things work.” 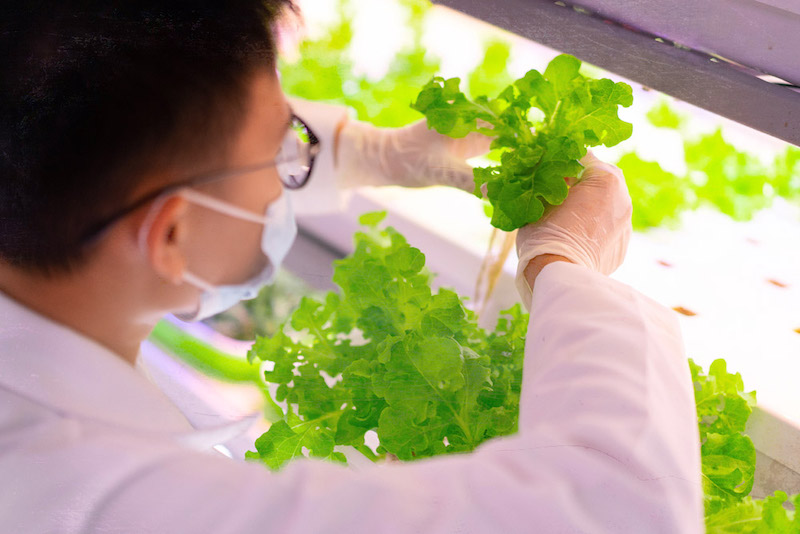 Beyond a startup tendency to stay lean and agile, part of the scramble came from launching the business barely a month before the first movement control order (MCO) last year. Initial plans for pop-up booths and taste testing as a market education tool were immediately shelved.

With only a small number of early adopters, they decided to focus solely on promoting their subscription model. Ng explains, “This was what truly appealed to our first base of customers — those who were concerned about regular access to freshly-grown produce without needing to brave the supermarkets or fearing a shortage of supply.”

That gamble paid off handsomely as revenue grew by 300 per cent in the first few weeks alone. Both co-founders realised that customer satisfaction and confidence were critical for pushing the product to market, and have since made it part of their company promise: To reduce the time and distance for quality produce to reach their customers.

“Customers who took the chance on us in the early stages could immediately tell the difference,” Ng says, “From there the product sold itself by word-of-mouth. The popularity of the subscription service drove demand and allowed us to expand and to increase our capacity as we prepare for the launch of our next phase in July.” 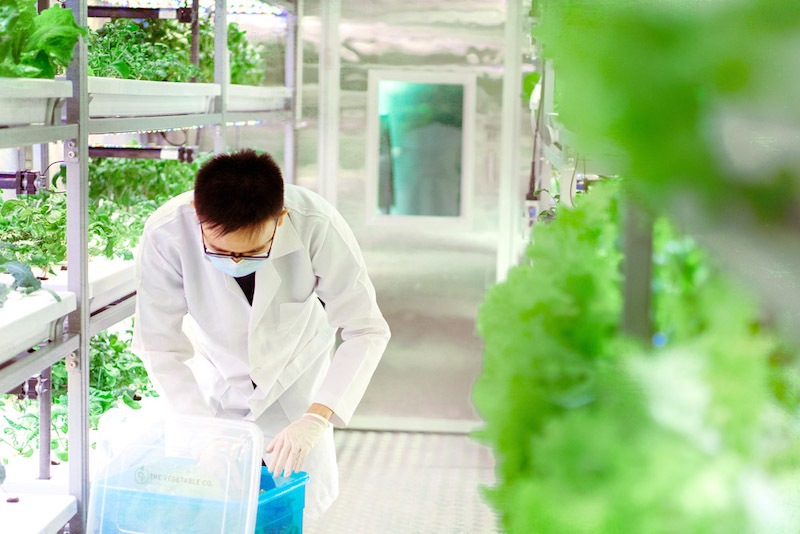 Packing the just-harvested vegetables into subscription boxes. — Picture courtesy of The Vegetable Co.

Since then, the duo has gotten the support of an angel investor as they expanded their operations. Ng adds, “Although we have no immediate fundraising plans, we’re looking at raising a bridging round sometime Q3/Q4 this year to continue our business expansion and technology consolidation.”

Part of that expansion would include gradually doubling the number of their produce variants as production capacity increases. Currently The Vegetable Co. has about 10 variants; a standard box comes with about seven variants, making every delivery a little surprise, not unlike CSA (Community Supported Agriculture) boxes. 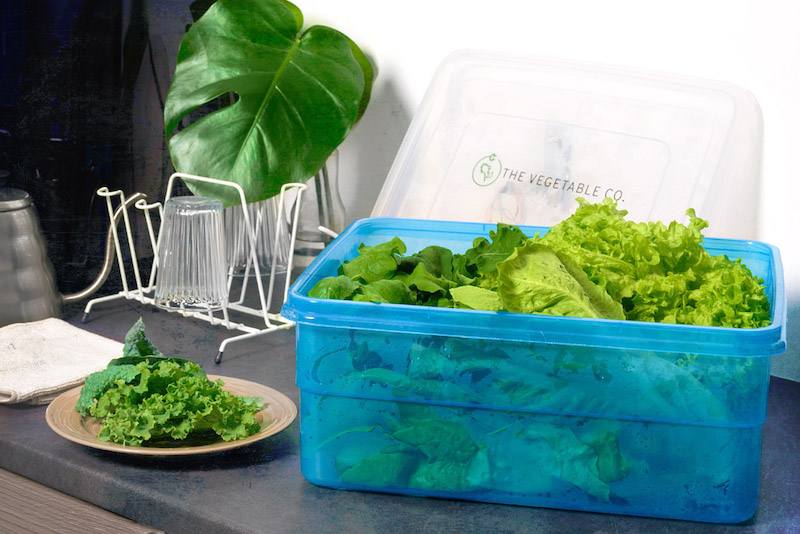 According to Ng, by having fresh vegetables delivered to them on a frequent basis, many of their customers have changed their diets for the better: “Some of our customers have taken to snacking on our veggies and moving away from the bad habit of eating junk food. Fundamentally, we are in the business of encouraging healthy habits and lifestyles.”

Are vertical farming and vegetable subscription boxes the future of our dining tables? It is early days yet but The Vegetable Co. certainly makes a strong and admirable case for Malaysian harvest-to-table.

To borrow from a classic jingle: Any fresher and you’d have to pick these greens yourself.