Wondering why there is a shortage of food delivery riders in KL and Selangor? Maybe it’s just because they are so lowly paid

Consumers and eateries have complained about delays and a shortage of riders lately. ― Picture by Hari Anggara
Follow us on Instagram, subscribe to our Telegram channel and browser alerts for the latest news you need to know.
By SYED JAYMAL ZAHIID

KUALA LUMPUR, April 29 ― Food delivery platforms like Grab Food and Foodpanda enjoyed a boost over the past year as Malaysians took to ordering food in a big way to avoid crowds during the various movement control orders.

But lately, consumers as well as eateries have complained about delays and a shortage of riders.

Some reports state that this could be because many of the riders could have gone back to their office jobs, others blame the rainy season while there are those who think that government hand-outs mean there is less of a necessity for people to take on these part-time jobs.

After talking to the riders themselves, one other possibility has surfaced: If riders have little incentive to continue, they won’t.

A key factor behind this, according to riders themselves, is the driving philosophy of today’s gig-based food delivery platform itself: keeping costs low to feed consumers’ absurd and insatiable demand for everything cheap, fast and good.

“Nobody would stay in this job if there are better ones out there,” said Radhi. “I have to work long hours just to earn RM140 a day. On the surface that sounds a lot, maybe it is, but it’s not every day I get to make that kind of money.”

Radhi’s grievance underscores the growing global disillusionment with the gig economy, which on one side has helped birth blue chip companies like Grab and Uber and, on the flip side, a new generation of lowly-paid “precarious” workers forced to depend on jobs that offer neither security or legal protection.

If the advantage of the gig economy is flexibility (of hours) with competitive income, Radhi believes that is really an illusion.

To earn around RM2,200, he would have to make many, many deliveries a day, usually averaging 12 hours consisting mostly of short distance deliveries that will get him RM5 per trip, and the occasional RM7 to RM8 for trips longer than 10 kilometres.

These fees are borne by customers themselves unless there are promotions, which service providers would subsidise as discounts. For profit, these firms take a clean cut from the food sold by merchants or vendors.

The gruelling hours have long been the source of contention among riders who feel their employers have failed to commensurate with the right pay.

Working hours can sometimes go as long as 12 hours, which Radhi confided is downright exhausting.

But growing up in a low income household means he has little option but to make those deliveries or he would earn much less.

With RM2,200 the job has helped him and his family, especially during the pandemic, when jobs are hard to come by.

Riders also have to apportion some of that salary to maintain and repair their bikes, which reduces their disposable income.

Most application-based delivery service providers, to keep costs at a minimum, do not provide bikes.

Combined with a pay system that can sometimes be unpredictable thanks to discounts intended to keep customers loyal, these issues have often been the source of tension between the firms and their riders, who in the past have launched several protests over what they felt was unfair compensation.

This friction is not unique to Malaysia. In the UK, for example, Uber drivers have reported feeling forced to work extremely long hours, sometimes more than 70 a week, just to make a basic living.

Many then became organised, went on strikes and launched lawsuits that eventually forced the ride-hailing app to recognise and pay them perks that come with formal employment, like healthcare benefits and overtime.

Malaysian riders, less organised, enjoy none of those benefits.

This longstanding dispute over pay and remuneration could be the underlying factor driving riders to shun these companies, causing the shortage and disrupting operations.

“If the job takes care of us, we wouldn’t go away right?” said Faliq, a part-time rider with a diploma in human resource management.

“I’ll split in no time if I get an office job,” he added.

The gig economy explosion has fueled a fierce ethical debate about whether or not regulation is necessary given the size and precarious nature of the industry, which tends to provide little job security and legal protection otherwise accorded through formal employment.

Labour rights proponents like Charles Santiago, Klang MP and an economist by training, have argued for “partial” regulation to accord workers some legal rights or fair compensation by enacting a law to force companies like Grab and Foodpanda to pay a living base wage. 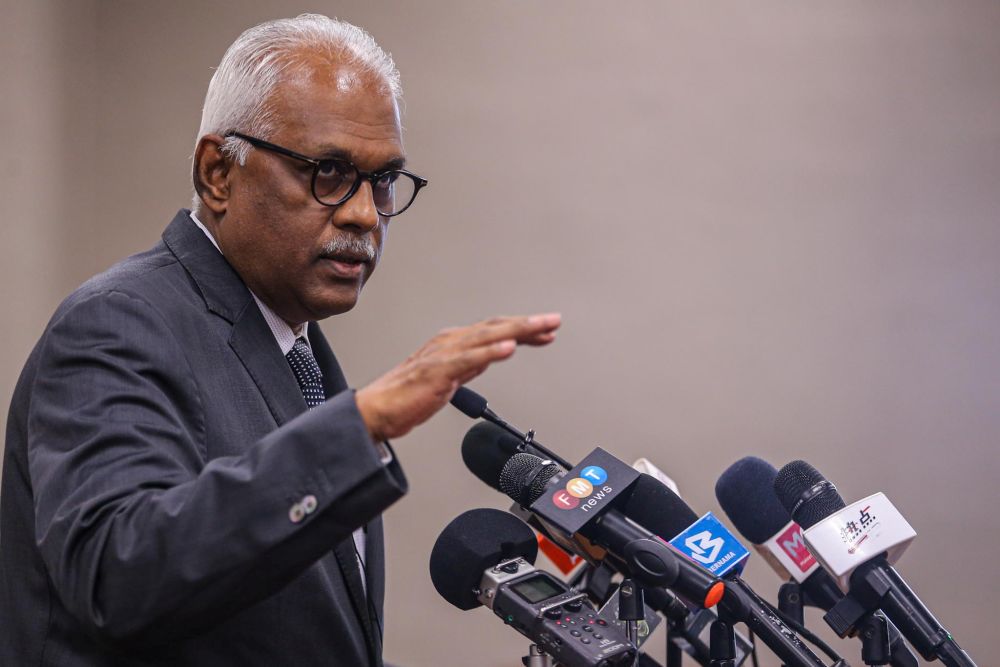 Klang MP Charles Santiago has argued for ‘partial’ regulation to accord workers some legal rights or fair compensation by enacting a law to force companies like Grab and Foodpanda to pay a living base wage. — Picture by Hari Anggara

“The government must make them pay a minimum wage at least so that even if they make less from delivery, a certain base wage is guaranteed,” he told Malay Mail.

“A lot of them are even struggling to pay for petrol and now petrol prices are already up… in fact we should be talking about living wage now, no more minimum wage,” he added.

Companies like Grab have responded by saying the rates they pay their “partners” are competitive. A company insider said they have a few theories to explain the phenomenon of rider shortage, but none of them mention low pay.

One is it coincided with the first Employees Provident Fund’s withdrawal measures in February through a facility called I-Sinar, among key Covid-19 relief measures announced by the Perikatan Nasional (PN) government.

“We noticed that the dip started when the first I-Sinar withdrawal started. Why? We don’t know,” said the source who requested anonymity because of the sensitivity around company data.

“But if we have to speculate, it could be that they’re taking a break. They’ve had to work hard throughout the pandemic so maybe they need the rest,” the insider added.

The arrival of Ramadan, the month which usually sees a dip in orders as Muslims fast throughout the day, could be another explanation.

Data suggests a similar trend playing out during festive celebrations, with the number of riders returning to normal after.

Still, whether or not that pattern would hold is still conjecture at this point.

“We’re hoping it would,” said the insider.

The disruption caused by the rider shortage has also extended beyond the food takeout business.

But there are those who see the drought in riders as a cue to start using in-house riders.

These restaurants tend to be smaller in size, well-established but are unwilling to pay the rate of commission charged by platforms like Grab and Foodpanda, which can go up to 30 per cent and significantly hurt their profit margins.

“We thought it was better to just start our own. Of course platforms like Grab have a wider reach, and we plan to sign up too but having our own service is more cost-effective,” said the manager of local pizza maker, Pizza Roma.

“Our service can cover a smaller radius,” she added.

Albert Wong Zhi Qin, who founded The Other Kitchen, a food and beverage delivery platform that helps source riders from existing service providers for such merchants, said the rider shortage has also affected his business.

He and his team now make deliveries on their own.

The problem is also a signal to the market that those boom days are nearing an end with businesses likely to see online orders decreasing to the pre-pandemic period as more people get vaccinated, Wong predicted.

He also believes that it will take some time before the supply of riders normalises, and joked that he and his team could be doing deliveries for some time.

“I think one of the reasons (for the shortage) could be many have returned to their full-time jobs,” he told Malay Mail.

“We have to remember that people do the delivery jobs as a side thing. So realistically I don’t think we can expect a return to the kind of pandemic-era business.”