Tharma Pillai speaks during a press conference on Undi18's lawsuit at the Kuala Lumpur and Selangor Chinese Assembly Hall April 2, 2021. — Picture by Choo Choy May
Follow us on Instagram, subscribe to our Telegram channel and browser alerts for the latest news you need to know.
By IDA LIM

KUALA LUMPUR, April 2 — A symbolic 18 Malaysian youths sued the prime minister, the federal government and the Election Commission (EC) today in a bid to ensure those aged 18 to 20 can register to vote by July 2021 instead of only after September next year.

In their lawsuit filed today at the High Court in Kuala Lumpur via a judicial review application, the 18 youths are seeking 14 court orders.

This includes a declaration that the government's action in delaying the lowering the voting age from 21 to 18 to be irrational, illegal, disproportionate and amounts to voter suppression.

Among other things, they are also seeking a court order to quash the government's decision to delay the implementation of the lowering of the voting age from 21 to 18.

The 18 Malaysian youths are directly affected by the EC’s delaying of the implementation of the lowering of voting age in Malaysia, as they are all aged between 18 and 20.

With the EC’s March 25 announcement that the lowering of the voting age will be implemented after September 2022, this means that only Malaysians aged 21 and above will be able to register to vote. 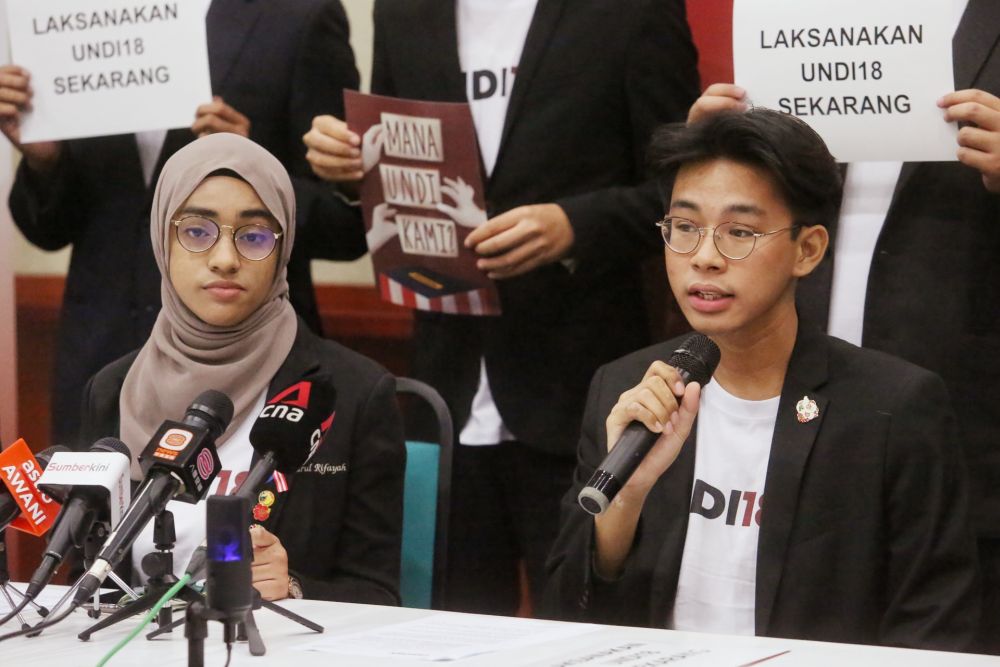 Two of the 18 youths who filed the lawsuit, Nurul Rifayah (left) and Rifqi Faisal (right) both aged 18. — Picture by Choo Choy May

The lawsuit filed on behalf of the Undi18 movement was announced by two of the 18 youths, namely student activist Nurul Rifayah and Sarawakian youth leader Rifqi Faisal who are both aged 18.

Rifqi, who is co-founder of education reform advocacy group MYER Movement, said many of the 18 youths are co-founders or leaders of movements or community leaders.

The 18 youths are multiracial and include Perspectives MY founding member Dawson Chong, who is aged 19, and 18-year-old youth empowerment advocate Lim Yue Kin who is a founding member of Majlis Kanak-Kanak MBPJ and a child councillor of Petaling Jaya city.

Undi18 movement’s co-founder Qyira Yusri, who was also present at the press conference, said the 18 youths who filed the lawsuit range from those who are currently in university to those who sat for their SPM examination a few weeks ago.

“They are from all over Malaysia. We have applicants from Kelantan, Johor, Perak and Sarawak, but they came together for this,” she said.

As for why the lawsuit specifically asked for the minimum voting age in Malaysia to be lowered from 21 to 18 by July 2021, lawyer Lim Wei Jiet said this was the timeline mentioned by the Malaysian government previously.

“I think there were a lot of representations by both ministers and the EC itself that it would be implemented by July 2021. So there is already an expectation by those between 18 and 20 to be able to vote after July 2021, so that’s why that specific date is mentioned in the prayers,” he said at the same event. Lawyer New Sin Yew is also representing the 18 youths.

If the lowering of the voting age is implemented by July 2021, Qyira said youths aged between 18 and 20 should be able to register to vote immediately, but that the actual time when they would be able to cast their vote would depend on the gazetting of the electoral rolls.

“But using the existing system that we have, the electoral roll will be updated every three months, so it would depend on when they are registered to vote.

“Which is why we are asking — in light of so much political instability and there have been statements that an election will be called immediately after the Emergency in August — for young people to be allowed to vote today, so they can prepare themselves for the election,” Qyira said.

Why youths aged 18 should be able to vote 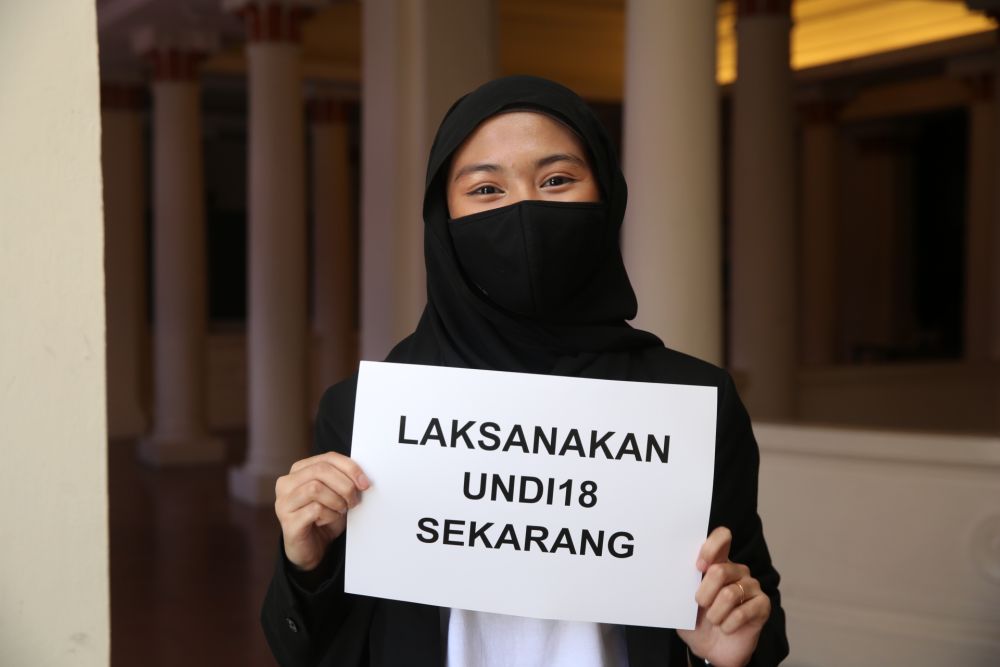 Elisa Shafiqah holds up a sign protesting the delay of Undi18 during a press conference at the Kuala Lumpur and Selangor Chinese Assembly Hall April 2, 2021. — Picture by Choo Choy May

Although certain politicians have cast doubt on allowing youths aged 18 to vote to justify the delay, Elisa Shafiqah — who is one of the 18 youths in the lawsuit — pointed out however that even youths as young as 18 can be as accomplished as someone who is 21.

“My 20-year-old peers are in university, paying taxes, and some are even married with kids. We have the same responsibilities as someone who is 21 years old and above,” said Elisa, who is also founder and campaign coordinator of the GenZDiplomacy programme under the Malaysian Youth Diplomacy initiative.

She also highlighted that the law now allows youths aged 18 to join elections to run for office, further saying: “The government has given us the trust to govern, so why can’t we exercise the basic form of democracy in our capacity, that is to vote? Delaying the lowering of the voting age not only denies our voices to contribute to the country, and also gives leeway for further injustices.” 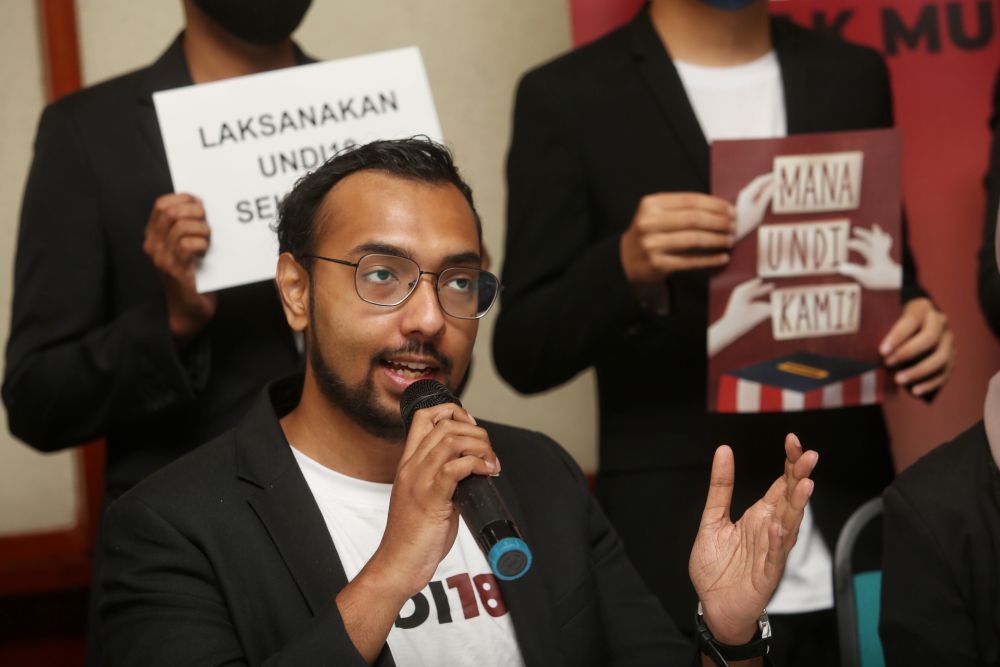 Tharma Pillai speaks during a press conference on Undi18's lawsuit at the Kuala Lumpur and Selangor Chinese Assembly Hall April 2, 2021. — Picture by Choo Choy May

Undi18 movement’s co-founder Tharma Pillai said democracy is not just about petty political scandals, but also involves matters such as the minimum wage, owning a reasonably-priced house, development policies, and being able to live with dignity.

“Young Malaysians have a right to choose leaders that represent their vision for a better Malaysia. Let them vote!” Tharma said.

To fund this lawsuit by the 18 youths, Undi18 will be selling limited quantities of T-shirts highlighting their #ManaUndiKami campaign at RM40 each via the website http://bit.ly/bajumuk, with all proceeds going towards legal costs for the lawsuit. 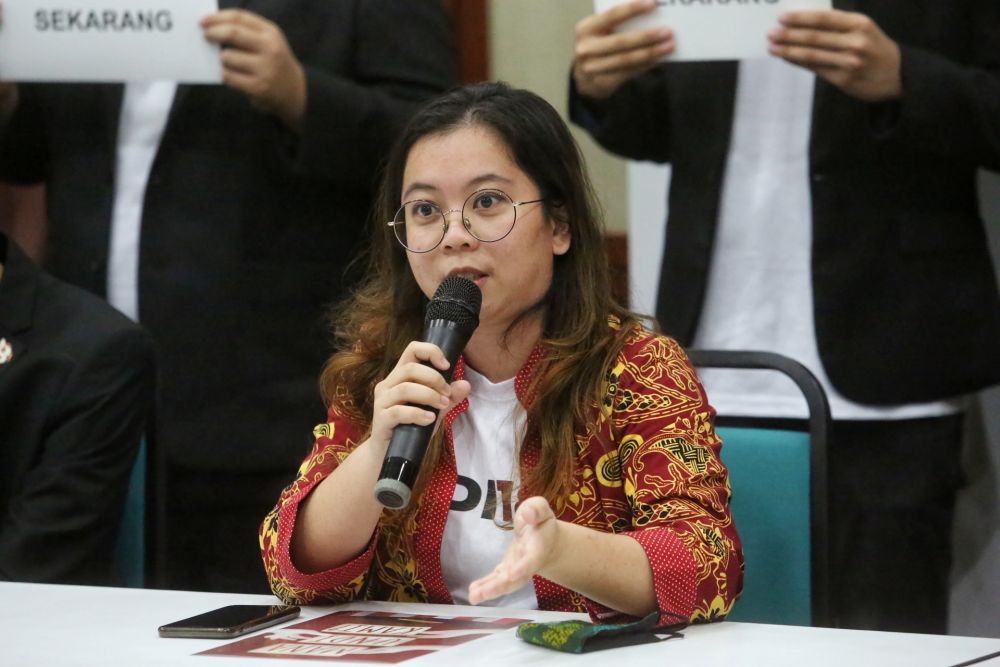 Qyira Yusri speaks during a press conference on Undi18's lawsuit at the Kuala Lumpur and Selangor Chinese Assembly Hall April 2, 2021. — Picture by Choo Choy May

Engaging with the government

Before the March 27 protest to push for Undi18 and before the filing of today’s lawsuit, Qyira said the Undi18 movement actually met with Youth and Sports Minister Datuk Seri Reezal Merican Naina Merican and his deputy Wan Ahmad Fayhsal Wan Ahmad several weeks ago.

“In our conversation with the minister himself, he agreed the government should look at the two amendments separately and not use automatic voter registration as a way to delay lowering the voting age.

“In that meeting, he agreed to bring it up in Cabinet which was announced yesterday as well, and he had requested the Cabinet as well, especially YB Takiyuddin, the minister of law, to present the proposal on lowering the voting age. This idea was supported by YB Khairy Jamaluddin,” she said.

One of the court orders that the 18 youths are seeking in the lawsuit is for the court to compel the government to immediately enforce the constitutional amendment for the lowering of voting age — Section 3(a) of the Constitutional (Amendment) Act 2019 — on or before July 2021.

In the Constitution (Amendment) Act 2019 which was gazetted as law in 2019, Section 3(a) lowers the voting age from 21 to 18, while Section 3(b) enables automatic voter registration to replace the current method of Malaysians having to register themselves as voters.

Both Section 3(a) and Section 3(b) have yet to be enforced yet, as the date for when these two provisions come into force has not been gazetted yet.

The Undi18 movement argues that the lowering of the voting age can be implemented earlier and separately from the automatic voter registration provision.