Malaysiakini fined RM500,000 for contempt of court over readers’ comments on the judiciary

Earlier today, the Federal Court decided Malaysiakini was in contempt, but said its editor-in-chief Steven Gan (pic) was not in contempt. ― Picture by Hari Anggara
Follow us on Instagram, subscribe to our Telegram channel and browser alerts for the latest news you need to know.
By IDA LIM

PUTRAJAYA, Feb 19 ― The Federal Court today sentenced Malaysiakini’s operator Mkini Dot Com Sdn Bhd to a fine of RM500,000 for contempt over its facilitation of five readers’ remarks against the judiciary on the news portal’s website.

Court of Appeal president Tan Sri Rohana Yusuf delivered the majority decision by six judges for the fine of RM500,000 to be imposed and paid within three days from Monday.

“In meting out the sentence that shall be imposed, we first take into account the apology that has been extended by the respondent and the fact that the respondents had cooperated both with the police and the courts.

“Having said that, it is our public duty to bear in mind of the seriousness of the contemptuous act today which will ultimately undermine the system of justice in this country.

“The impugned statements had gone both far and wide both locally and internationally and the contents published are spurious and reprehensible in nature and it also involves allegations of corruption which are all false and untrue.

“We are of the view that a fine in the sum of RM500,000 would be appropriate, so hereby an order for the fine by the first respondent to be paid within three days from Monday,” the judge said after the panel stood down to deliberate on the sentencing.

Chief Judge of Malaya Tan Sri Azahar Mohamed, Chief Judge of Sabah and Sarawak Datuk Abang Iskandar Abang Hashim, Datuk Seri Mohd Zawawi Salleh, Datuk Vernon Ong Lam Kiat, Datuk Abdul Rahman Sebli were the five other judges on the Federal Court panel that agreed with the RM500,000 sentencing on Malaysiakini. Rohana and the five judges had however said that Malaysiakini's editor-in-chief was not in contempt of court.

Federal Court judge Datuk Nallini Pathmanathan was the only judge in the seven-member panel that dissented, holding in her minority ruling that both Malaysiakini and its editor-in-chief were not in contempt of the court. 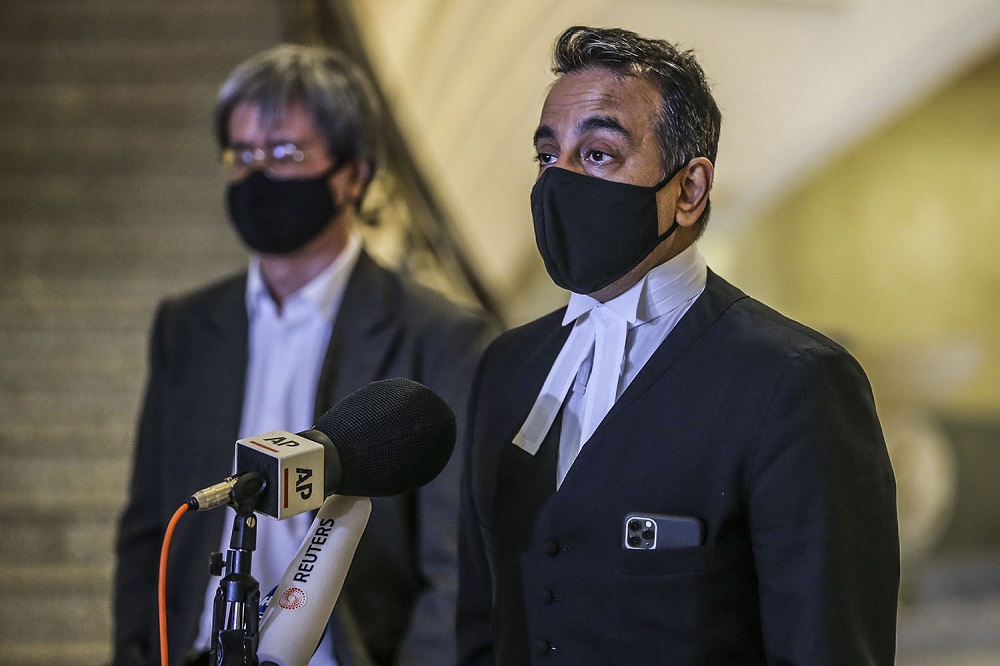 Before the Federal Court decided on the fine, Malaysiakini’s lawyer Datuk Malik Imtiaz Sarwar had suggested that the judges consider the judgment itself ― which found the news portal to be in contempt of court ― to be sufficient, having also highlighted Malaysiakini’s previous unreserved apology on the comments which the portal had immediately removed within minutes of being alerted.

“The judgment records Malaysiakini as in contempt, which in itself is quite a strong thing. However if this noble court considers a need to go further, obviously because it’s a company, would have to be a fine, I would ask My Lords and My Ladies to consider a nominal fee.

“I would think something in RM20,000 to RM30,000 would be a fair sum to reflect the displeasure of the courts, but at the same time show the compassion of the court with respect to the fact that this case is the first of its case,” he said.

Imtiaz further asked for the Federal Court to allow for two or three working days for such a fine to be paid, due to the next two days being the weekend.

“I would urge my Ladies and My Lords to see the fact that the judgment itself will go a long way in addressing the state of affairs,” he said.

In asking for a nominal fine, Imtiaz had also highlighted Malaysiakini’s unreserved apology in previous documents submitted to the court, where the news outlet and its editor-in-chief having stated: “The respondents regret the tone and tenor of the comments and unreservedly apologises to this honourable court and the judiciary as a whole for having unwittingly allowed for their airing. Neither of us had any intention of scandalising or undermining the judiciary in any manner whatsoever.”

Premesh Chandran, the CEO of Malaysiakini who also attended court today as a representative, also verbally addressed the Federal Court’s seven-judge panel briefly to reiterate the news outlet’s apology: “I unreservedly apologise to the court for the comments published.”

Among other things, Imtiaz also highlighted to the judges that Malaysiakini had cooperated throughout the entire incident, including immediately accepting that the readers’ comments brought to its attention were contemptuous and without arguing otherwise, while also providing evidence that would assist the Federal Court and approaching court proceedings “with candour and without any intention to avoid liabilities on technicalities”.

However, senior federal counsel Suzana Atan pressed for a higher sum of fine to be meted out on Malaysiakini.

“My Ladies, My Lord, although we acknowledge that the first respondent (Malaysiakini), there was an expression of regret from the first respondent but we believe it has to be balanced with the failure to assume responsibility, being an online portal which facilitates comments being made on the portal.

“They must be accountable, My Ladies and My Lord. This is the first case of its kind. We believe this case should serve as a reminder not only to the first respondent, but to all online news portals which provide such services, therefore we propose for a fine of RM200,000 as an appropriate sentence,” she argued.

After hearing the proposed fine amounts by both the lawyers for Malaysiakini and from the Attorney General’s Chambers, the judges then stood down for slightly over 40 minutes before deciding on the sentencing for Malaysiakini.

Earlier today, the Federal Court decided Malaysiakini was in contempt, but said its editor-in-chief Steven Gan was not in contempt.

The five comments were posted under a June 9 news report titled “CJ orders all courts to be fully operational from July 1”, with Malaysiakini having previously said that it was alerted at 12.45pm on June 12 about these comments when police contacted them to notify about investigations regarding these comments.

In court documents, Malaysiakini previously said it was not aware of the five offensive comments previously as no readers had reported these comments and as the comments did not carry any of the “suspected words” that Malaysiakini’s filter could detect, further noting that the editorial team had immediately reviewed the comments upon being alerted by the police and removed the comments at 12.57pm the same day.

Based on court documents, it is understood that Malaysiakini had previously on June 26 provided details on the names and email addresses of the five readers who made the comments to the police and Malaysian Communications and Multimedia Commission (MCMC) with MCMC having requested for such details, and that Malaysiakini has since permanently banned the subscribers who posted the five comments.

The offensive comments that five Malaysiakini readers had made against the judiciary had included criticism against the courts over the acquittal of former Sabah chief minister Tan Sri Musa Aman of 46 corruption and money-laundering charges, despite the High Court’s June 9 acquittal of the politician actually being the result of the prosecution’s withdrawal of all the charges.