MCO 1.0 vs MCO 2.0: A look at how single mothers are coping and if anything has changed

Preschoolers adhere to strict standard operating procedures on the first day of school at Mayter Kindergarten in Cheras on July 1, 2020. — Picture by Hari Anggara
Follow us on Instagram, subscribe to our Telegram channel and browser alerts for the latest news you need to know.
By IDA LIM

Several women in the Klang Valley had last year shared with Malay Mail their struggles and challenges as sole caregivers during the MCO.

Particularly worrying were the strict rules then stipulating that only one person per household was allowed to carry out grocery shopping, placing them in a dilemma as they could not leave their child alone at home.

Barely a year later, the MCO has been reintroduced in Malaysia, but in a more relaxed form. For example, two persons per household can now go out for groceries, and private kindergartens are allowed to open, providing parents who work from home some respite.

Malay Mail caught up with the single mothers from last year to see whether they were coping better during MCO 2.0. We also asked about the slightly more relaxed months between MCO 1.0 and MCO 2.0.

(MCO is the strictest version of lockdowns in Malaysia, with the first MCO from March 18 to May 3, 2020, while MCO 2.0 started on January 13, 2021 for almost half the states in Malaysia before its expansion to every state except Sarawak and is currently scheduled to end on February 4 if not further extended).

Here’s what they told Malay Mail, about a week into MCO 2.0:

Business consultant CY, 43, was working from home during MCO 1.0. She secured a new project based in Kuala Lumpur last June — which was after MCO 1.0 and the first conditional movement control order (CMCO) — that requires her to be at the client’s office in person twice a week.

During the recovery movement control order (RMCO) period from June to October, CY said she had several months of what would be considered “more ‘normal’ work/family life”.

But when the CMCO was reimposed in October, CY said it was a difficult time for her as her five-year-old son’s school had to close while she still had to commute twice a week.

“The period which was most difficult was from mid-October when schools were shut but economic activities continued. I had to engage help from neighbours, home tutors, a part-time helper and a babysitter to take turns caring for my son on the days when I had to go to the office.

“It is more efficient to work at the office when one has a young child at home too; hence that period was extremely challenging.

“For me, it’s crucial that schools are allowed to open during any lockdown period, leaving the flexibility to parents to send their children in or not, of course with strict SOP adherence,” she said.

Comparing last year’s situation with this year, however, CY said her son’s kindergarten is closed during MCO 2.0, but noted that the nursery next to her house remains open and was kind enough to accommodate her son until his school reopens.

“Comparing MCO 2.0 to MCO 1.0, it is more challenging as I have more on my plate workwise. But on the other hand, with kindergartens open, it’s easier to manage this time around.

“My son is happier so far during MCO 2.0 too, as he is able to go to the kindergarten and socialise with friends,” she said.

CY said her experience during MCO 1.0 has “definitely” helped her cope better with MCO 2.0 as a single mother.

She added that she feels better prepared now with a better support system in place, especially with kindergartens and childcare centres being allowed to open.

“For MCO 2.0, I am more mentally prepared and have also done the necessary work to ensure I get the support I need in the event schools are closed and I have to go to work.

“I have written to the management office of my condo seeking special permission to admit my part-time babysitter just in case I need her. Meal preparation is now easier too,” she said.

CY explained that accessible Covid-19 testing made it possible for her to appeal to her condominium’s management office to allow her part-time helper to enter during MCO 2.0.

She also noted that she had actually sent her part-time helper for a Covid-19 screening as she needed to provide the test results to secure her entry to the condominium.

“Accessible testing helps me to put a case of appeal for my helper to gain entry. For MCO 1.0, testing wasn’t as easily available and it was not even a consideration for the management,” she said. A preschooler is pictured at Mayter Kindergarten on his first day back at school in Cheras July 1, 2020. — Picture by Hari Anggara

For Abigail Lo, 34, the biggest difference for her is that her four-year-old son’s kindergarten is allowed to open during MCO 2.0, which makes it easier for her to juggle work and childcare.

Lo agreed that her experience during MCO 1.0 has probably helped her fare better during MCO 2.0 as a single parent, as she now has a “decent idea of what to expect and how to manage things”.

“Nothing much has changed — it’s much easier this time around because I know what to expect. But it’s better because my son’s kindergarten is allowed to open, so I’m sending him to school and I get to work during the day.

“It’s tiring with a full day’s work, and then childcare afterwards, but at least I am able to work now,” she said.

During MCO 1.0, Lo received help for grocery shopping from a friend who was stuck in Kuala Lumpur.

After the friend left the country sometime during RMCO, she was left doing the groceries once more, but noted that her sister and brother-in-law have been very supportive, adding: “And we’ve gotten to know many of our neighbours during the various times when the schools have been closed.”

In between MCO 1.0 and MCO 2.0, which was when the Klang Valley shifted from the CMCO to RMCO and then back to CMCO 2.0, the kindergarten which Lo’s son attends was only open sporadically.

“The period in between was a bit stressful as things weren’t quite back to normal, and some schools were open, some were closed. Ours was closed for a significant portion during the RMCO etc. so that was really troublesome in terms of getting work done,” she said.

“I’m very thankful that my [son’s] school is allowed to remain open as there’s no way I could be effective at work having such short hours otherwise,” she added, referring to MCO 2.0 rules.

Getting groceries has also been easier during MCO 2.0 for Lo: “It seems like people in general are stocking up less and just getting groceries normally, so there are no long queues. Since my son is at school, I can go shopping without having to take him with me and expose him.” 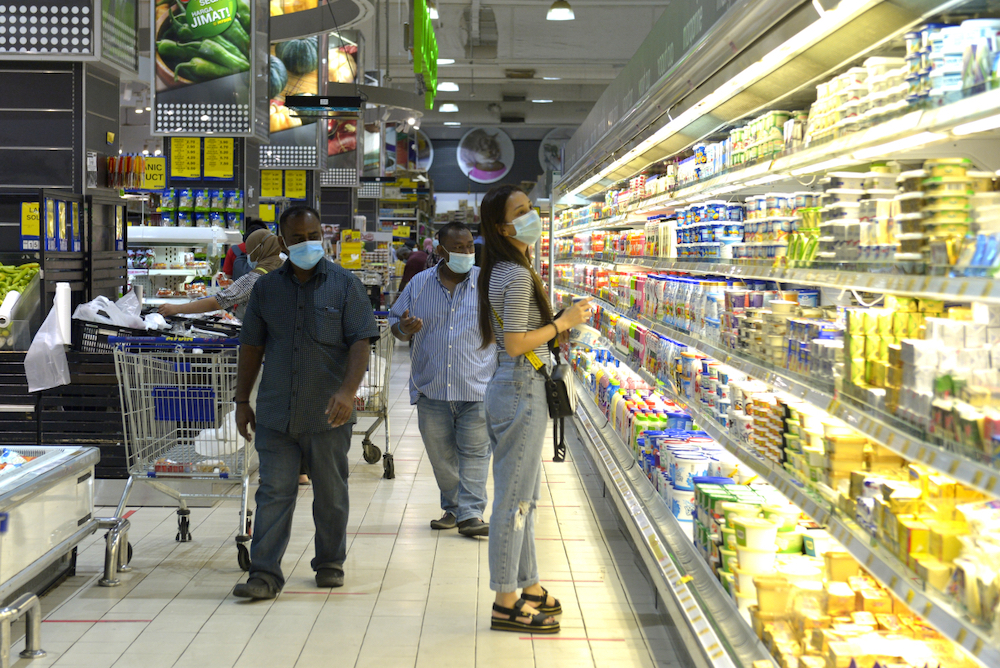 People shop for groceries at a supermarket in Subang Jaya a day before the movement control order takes effect, January 12,2021. — Picture by Miera Zulyana

Another major change for Lo is that she was voted in as the chair of “ibu Family Resource Group” — a non-profit organisation which supports families in Kuala Lumpur — at the end of September 2020. Before that, she was the vice-chair. With her new position, Lo said she has been making a greater effort to try and support more parents.

“We are launching a listening partners programme in February so that parents can express their feelings in a safe, non-judgmental and empathetic space,” she said. 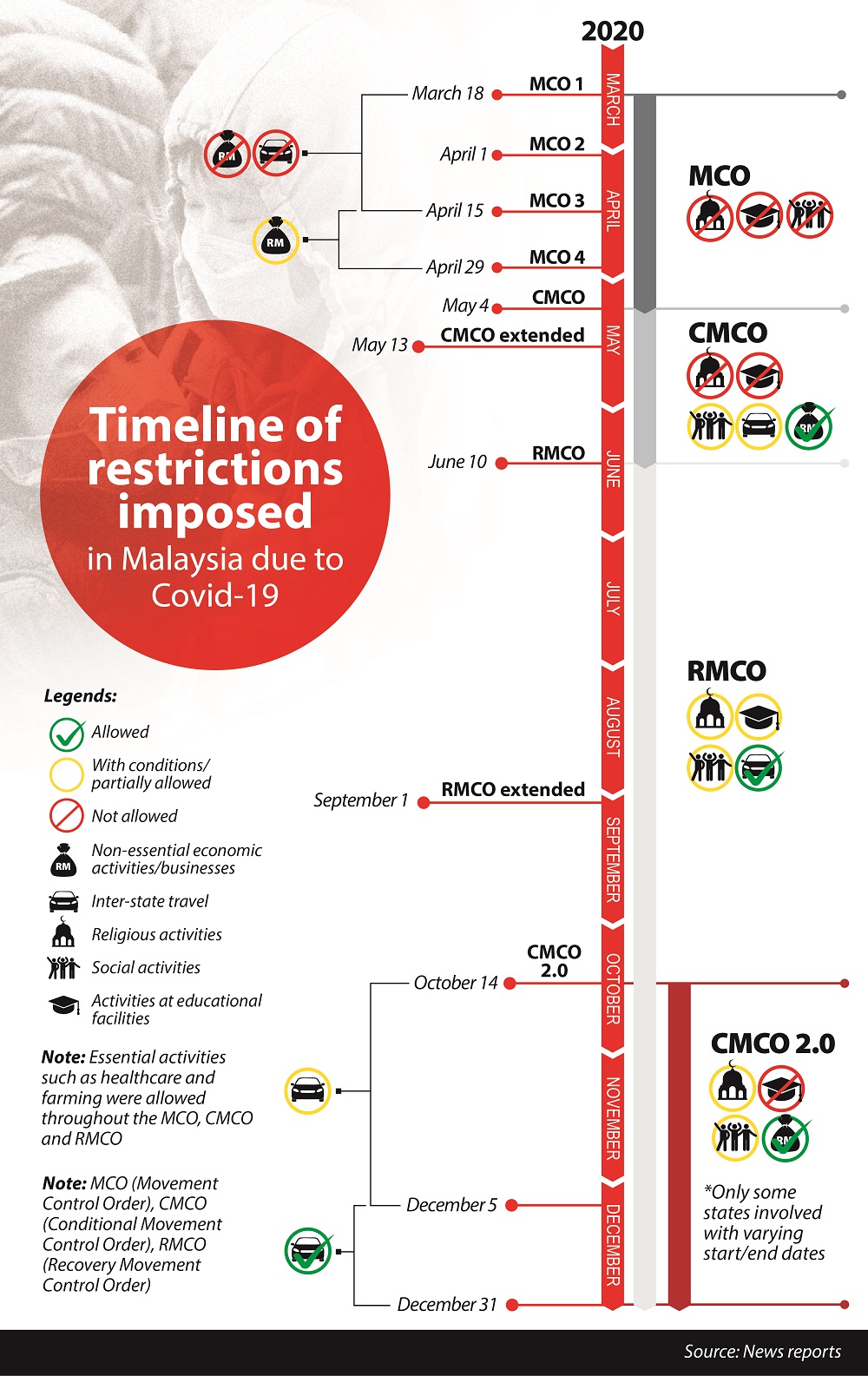 Angela, 31, still cares for her three-year-old daughter on her own, and is now back to juggling childcare with working from home again following the return of MCO this month.

“Since the first MCO, everyone seems to be more aware and is more understanding of each other’s challenges during the MCO. (I think all the articles/postings on social media definitely helped). Eg Buying groceries was impossible during MCO 1.0, but online delivery is even more efficient and convenient now with all grocery stores improving their delivery experience.

“I wouldn’t say it has become easier, but it definitely has not become more difficult,” she said.

“Following the above, I’ve fully adapted to the MCO lifestyle and have more tips and tricks up my sleeve for managing day-to-day life coping with work, juggling with chores and taking care of my daughter at the same time,” she said.

During the first MCO, Angela was once refused entry to a supermarket as she was with her child. She was even told to leave her then two-year-old toddler outside with supermarket staff. When they were finally allowed in, it was under the judgemental gaze of onlookers. That was when the one person per household rule for grocery shopping was still in force. 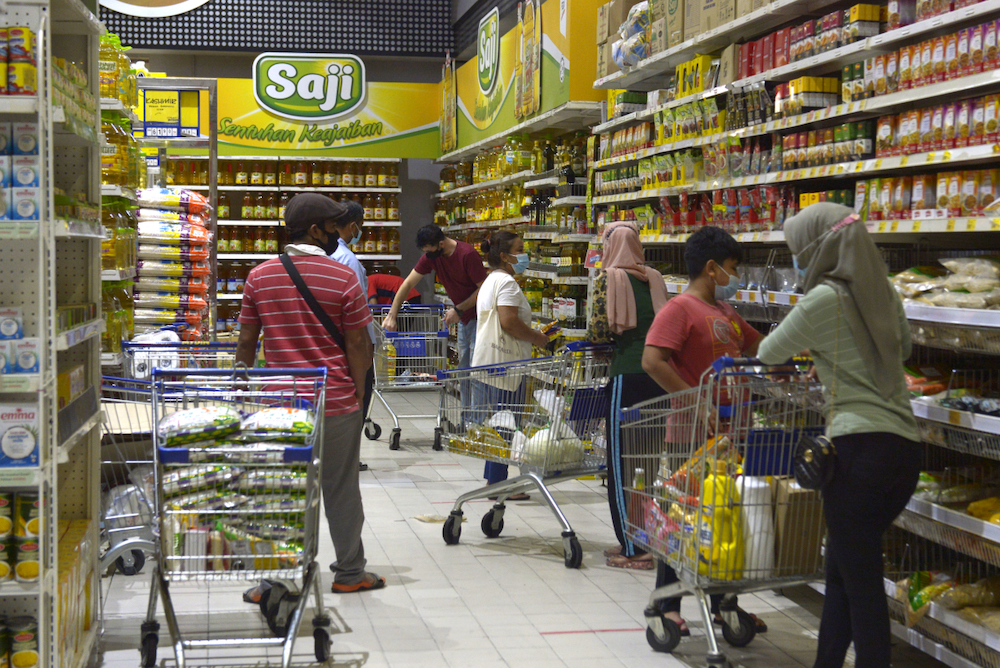 People shop for groceries at a supermarket in Subang Jaya a day before the movement control order (MCO) takes effect, January 12,2021. — Picture by Miera Zulyana

For Angela, not much has changed for her during MCO 2.0 when it comes to a support system, noting: “It’s still stressful, but with practice, it really does get better”.

Recapping the time since March 2020, Angela said: “Completing the whole loop of MCO > CMCO > RMCO > CMCO > MCO again, it does feel like our lives have become a ‘merry-go-round’, WFH (work from home) > back to office with my daughter back in nursery > back to WFH again.

“I think it’s pretty confusing for a young toddler like my daughter as she isn’t able to comprehend what’s going on.

“Thankfully, she seems to be quite comfortable at home for the time being, but I’m worried that it’s affecting her growth without the mind stimulation that she gets from her nursery and I’m not able to home school her as work is still pretty hectic on my end, despite working from home,” she said. 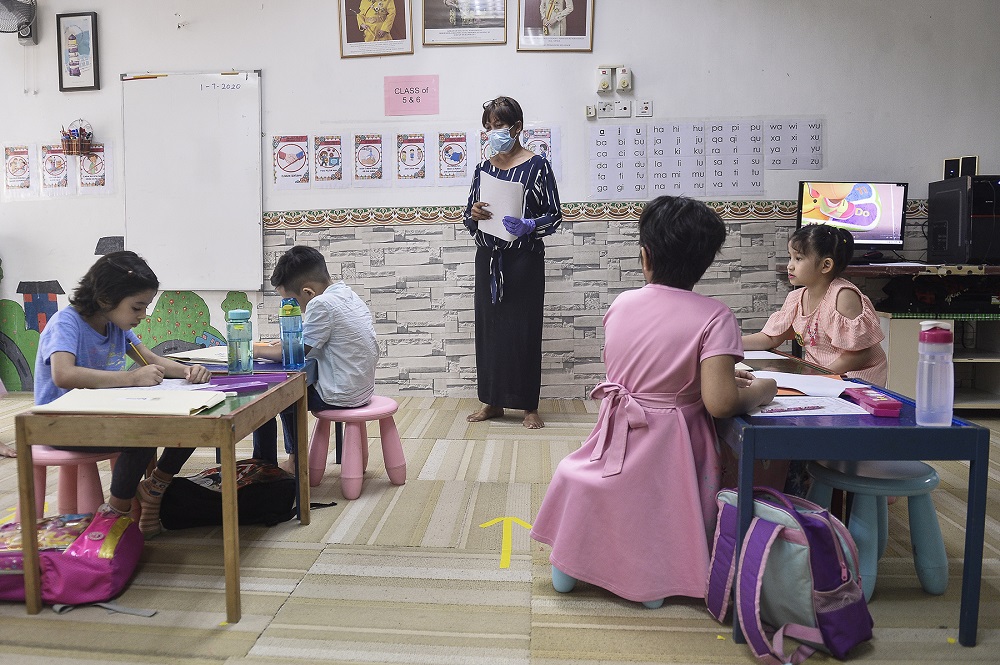 While noting that nurseries are allowed to operate during MCO 2.0, Angela said she still has reservations about sending her daughter to the nursery in light of the high number of Covid-19 cases detected in Selangor.

“Yes, she won’t be attending nursery for the time being. It’s really a tough decision to make. So I won’t say it’s a definite ‘no’ until the MCO is lifted. I just want to monitor the situation while I decide.

“So while the nursery is allowed to operate, I am not sure if it’s safe for her even though I am confident that the teachers/staff are ensuring all the necessary SOPs are in place,” she said.