Going to work during MCO 2.0? Here's what you must show at police roadblocks, according to Miti

Employees in the manufacturing sector must present documents issued by both their employer and the Ministry of International Trade and Industry (Miti) at police roadblocks when commuting during the movement control order (MCO). — Picture by Sayuti Zainudin
Follow us on Instagram, subscribe to our Telegram channel and browser alerts for the latest news you need to know.
By IDA LIM

KUALA LUMPUR, Jan 12 — Employees in the manufacturing sector must present documents issued by both their employer and the Ministry of International Trade and Industry (Miti) at police roadblocks when commuting during the movement control order (MCO).

Minister of International Trade and Industry Datuk Seri Mohamed Azmin Ali today said his ministry has oversight over the manufacturing sector, which is one of five essential economic sectors allowed to operate onsite during the MCO from January 13 to January 26 in Selangor, Kuala Lumpur, Putrajaya, Labuan, Johor, Penang, Sabah and Melaka.

Here is what you need to know, based on Azmin’s statement today and a list of frequently-asked-questions (FAQs) provided by the ministry:

In order to operate during the MCO period, manufacturing companies in the essential services are required to register with Miti’s online database, which is known as the Covid-19 Intelligent Management System (CIMS).

Companies which have yet to register can do so at https://notification.miti.gov.my from today onwards, and will have to download the notification of registration confirmation after the companies complete their registration.

The FAQ said the words ‘www’ should not be used in accessing the website https://notification.miti.gov.my, also adding that companies can send an email to [email protected] if they face technical difficulties in updating their information in CIMS.

As for companies already registered under the CIMS system including last year, Miti said that there is no need to register again as the CIMS registration only has to be done once. Such companies also do not need to update the list of workers previously declared in the CIMS system.

The previous letter of approval to operate issued in 2020 to such companies are cancelled, which means companies that had already registered previously will have to download the latest letter of notification of registration confirmation from the CIMS system (https://notification.miti.gov.my) using the same log-in details and password.

To all industry players, all information related to the MCO on manufacturing sectors can be accessed via https://t.co/pMVtMugppT#StaySafe #AdheretoSOPs #EconomicRecovery pic.twitter.com/IhmVNJNqkk

What you need to carry to work

Azmin stressed that the registration process via CIMS only applies to companies in the manufacturing sector under the purview of Miti.

“It is the responsibility of the employer to download the notification of registration confirmation in order to enable the movement of their employees during the MCO period.

“Employees of the company who are allowed to be at work according to the specified times are required to bring along a copy of the notification provided by the employer together with the employee pass/employer confirmation letter.

According to Miti’s FAQ, commercial vehicles carrying goods and services are allowed to move around in MCO areas using an employee pass or employer’s approval letter.

Delivery of commercial goods or travel for work or business that crosses states or districts are allowed as long as the employee carries either an employee pass or employer’s approval letter.

When it comes to private vehicles, the permitted maximum number of persons for those getting essential goods are only two (one driver and one passenger), while the maximum limit is three persons (one driver and two passengers) if seeking treatment at the clinic or hospital, Miti’s FAQ said.

Yesterday, the prime minister had said inter-state movement is not allowed nationwide, and that inter-district movements are also disallowed in MCO areas, with roadblocks to be imposed from January 13 onwards.

Movement in MCO states are limited to only a 10km radius with only two persons from the same household allowed out in the same vehicle when buying essentials from nearby supermarkets or grocery stores, with a maximum RM1,000 fine if the restrictions are breached, the prime minister had said 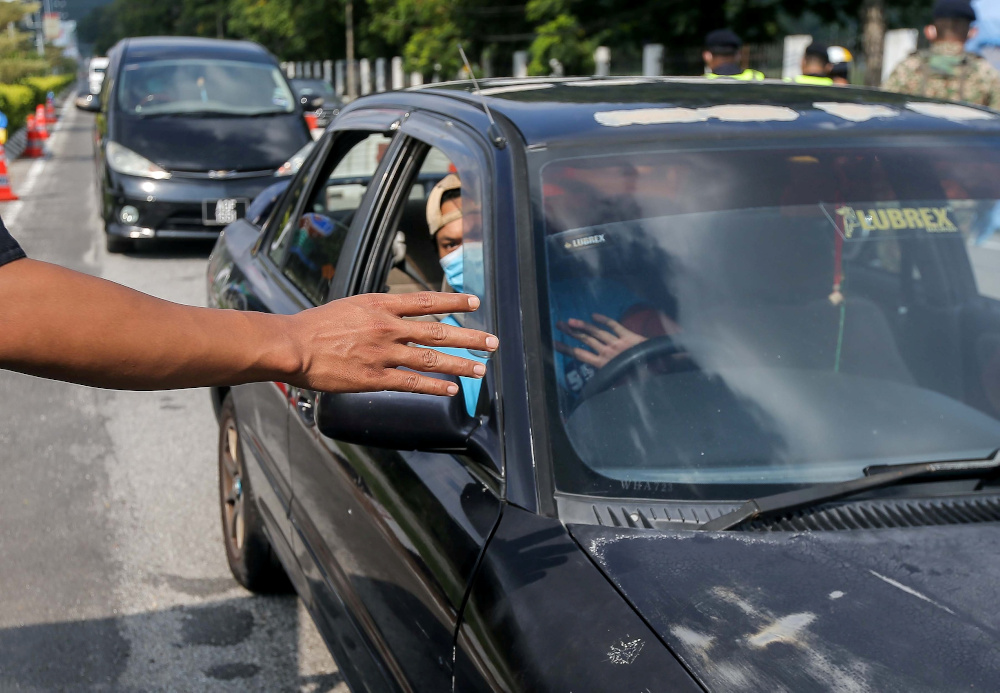 Movement in MCO states are limited to only a 10km radius with only two persons from the same household allowed out in the same vehicle when buying essentials. — Picture by Farhan Najib

Who can go to work?

Miti gave an example where there are 10 people or fewer in the management and supervision group of a company, saying that this means that only three people are allowed to come to office at any one time.

As for support staff and employees directly involved in the production line, Miti said the numbers permitted at the workplace will be determined by their respective employers while taking into account strict compliance with standard operating procedures.

For workers in other sectors that are not categorised as essential services, the work from home order will apply to them. The work from home directive will also apply for work that does not require physical attendance.

For employees who refuse to come to work and insist on working from home, Miti said employers can take action according to the companies’ discretion and procedures based on government policies and laws, and further questions on this matter can be directed to the Department of Labour.

As for other questions such as whether employees who have to go to the office are required to undergo Covid-19 tests, Miti’s FAQ directed companies to refer to the general MCO SOPs on the National Security Council’s website www.mkn.gov.my.

As to whether companies can operate for 24 hours during the MCO, Miti directed companies to refer to the general MCO SOPs on the National Security Council’s website www.mkn.gov.my, while manufacturing companies under Miti’s purview could refer to the SOPs at Miti’s website www.miti.gov.my and other companies under the essential economic sectors (manufacturing, construction, services, trade and distribution, plantations and commodities) under other ministries were asked to refer to the specific SOPs by the relevant ministries or government agencies.

Reports can be lodged at the nearest police station if any companies are found to have not complied with MCO SOPs, Miti’s FAQ said.

Azmin also said that Miti together with the state authorities will be carrying out periodic enforcement during the MCO period on companies to ensure compliance with SOPs, with failure by employers to comply with SOPs to be met with legal action such as the issuing of compounds for offences or closure of premises.

The full list as of January 10 of the industries under the five essential economic sectors that are allowed to operate during the MCO can be found here. As part of the list, there is also a catch-all phrase where those not included in the list can be allowed to operate after talks with the relevant authorities and as decided by the Health Minister.