KUALA LUMPUR, Nov 23 — The persistent spike in daily Covid-19 cases in the last two months has prompted health analysts to question if the renewal of the conditional movement control order (CMCO) has been effective in reining in the pandemic.

Despite the consensus that social distancing and movement restrictions are important to control the outbreak, some medical professionals believe there are weaknesses in how the current CMCO is enforced, even as public health authorities say the curbs are saving lives.

Among them is the lack of transparency regarding data.

One expert noted that the Ministry of Health (MOH) is now less open with detailed information compared to the first few months when the country was under a full lockdown, making it difficult to evaluate the efficacy of the current restrictions.

“Since the MOH stopped publishing more details, it is hard to assess, especially from the outside. Based on its press releases, the R0 did go down slightly since the start of CMCO,” said Dr Khoo Yoong Khean, managing editor of The Malaysian Medical Gazette.

“Also, it is perhaps a little unfair to compare CMCO to the MCO where restrictions are much stricter, so possibly CMCO is just slower to take effect.”

R0, or r-naught, refers to the basic reproduction number of Covid-19 infections and measures the average number of people each new patient is likely to infect. A number greater than 1.0 means infections are accelerating and a number below this indicates they are being suppressed.

MOH had said the country’s R0 was between 1.5 to 2.2 from late October to mid-November, when most cases consistently exceeded 800 daily, almost double the numbers seen during the peak of the second wave that spanned March to May, with the highest daily rate surpassing 1,100.

The bulk of initial cases had been in Sabah, the pandemic’s current epicentre, but this was later surpassed by states in the central region of the peninsula — Selangor, Kuala Lumpur, and Putrajaya — where the CMCO has been in effect since mid-October.

The order has now been extended to December 6 as cases in the Klang Valley and Negri Sembilan rose steadily but critics, citing the lack of data and inconsistencies in MOH statements, have deemed the extension arbitrary and argued for a more targeted approach.

Dr Khoo, in arguing against a blanket movement ban, noted that most cases in the Klang Valley are from clusters found at construction sites, where infection can spread quickly because many workers are crammed into small dormitories.

He said imposing targeted curbs would be better to contain the outbreak instead of a state-wide partial lockdown, which adversely affects businesses already reeling from the first phase of the MCO.

“So the question is whether there is a need for a prolonged CMCO. Initially when we expected many infections from travellers coming back from Sabah, perhaps we did,” he said.

“But now the pattern has changed so the authorities need to readjust the strategy again. State-wide CMCO could still work now, but perhaps it is not the best strategy, considering how economically damaging it is.”

Official estimates of losses accrued during the six months of MCO and CMCO was some RM25 billion a day, or about a fourth of GDP in total.

Prime Minister Tan Sri Muhyiddin Yassin said the decision to impose another CMCO was done reluctantly but justified its implementation as a necessity to “balance” preserving lives and livelihoods.

Enforcing restrictions early in October had resulted in a lower R0 of between 0.9 and 1.1, down from 2.2 at the start of the so-called third wave, he stressed on November 16 in the face of mounting criticism against the government’s response to the outbreak.

But critics said the absence of transparent data makes it hard to measure its effectiveness. This comes as a new study by the Imperial College London suggested the number of cases in Malaysia could be much higher than what official figures suggest.

Dr Khor Swee Kheng, a health system and policies specialist, said the MOH is obligated to provide the data if it wants to debunk the projection. Dr Noor Hisham had dismissed the Imperial London College’s findings as inaccurate.

“If it’s true that the numbers are that high then the onus is on the MOH to explain why the CMCO remains effective,” he said, referring to the recent surge in daily cases compared to that during the second wave.

Dr Khoo, in arguing against a blanket movement ban, said imposing targeted curbs would be better to contain the outbreak instead of a state-wide partial lockdown.

Nearly a year into the pandemic, policy makers around the world continue to debate the effectiveness of lockdowns and whether these remain the best non-medical intervention option given the effects on economies.

Still, a large part of the disagreement is centred around the degree of restriction and not so much the restriction itself. For example, the Imperial College London experts also agreed that lockdowns have helped save lives.

Yet government intervention can be improved and formulated better, they argued.

Dr Khoo said regulations should have more clarity, while capacity building should not only focus on facilities to treat patients but also changing behaviours, which has been less effective because of the contradictory and confusing messages from public health officials.

“Eleven months into this, the MOH and National Security Council should have the guidelines crystal clear,” he said.

“We must also understand part of capacity building is instilling the so-called new norms into our daily lives. Mandatory masks were implemented too late and very shoddily,” he added.

“These are behavioural changes and need time to be incorporated into our lives. We should have started earlier & enforcement as well as community messaging, leadership by example must go hand in hand to instil these habits.”

It found NPI categories like mass gathering cancellations, risk-communication activities to inform and educate the public and government assistance to vulnerable populations had a significant outcome.

Dr Khor agreed. He said changing public attitudes is far more practical than going in and out of lockdowns, citing countries where their public health authorities have succeeded in keeping the pandemic under control without imposing strict restrictions.

“I think changing behaviour is more sustainable than restricting activities,” he said.

“Success of countries like Taiwan, Thailand, and Vietnam focused on changing behaviour.”

Yesterday, Selangor which has been on an extended CMCO period, recorded its highest number of Covid-19 infections so far with 603 new cases, also making up 55 per cent of the overall nationwide total of 1,096. 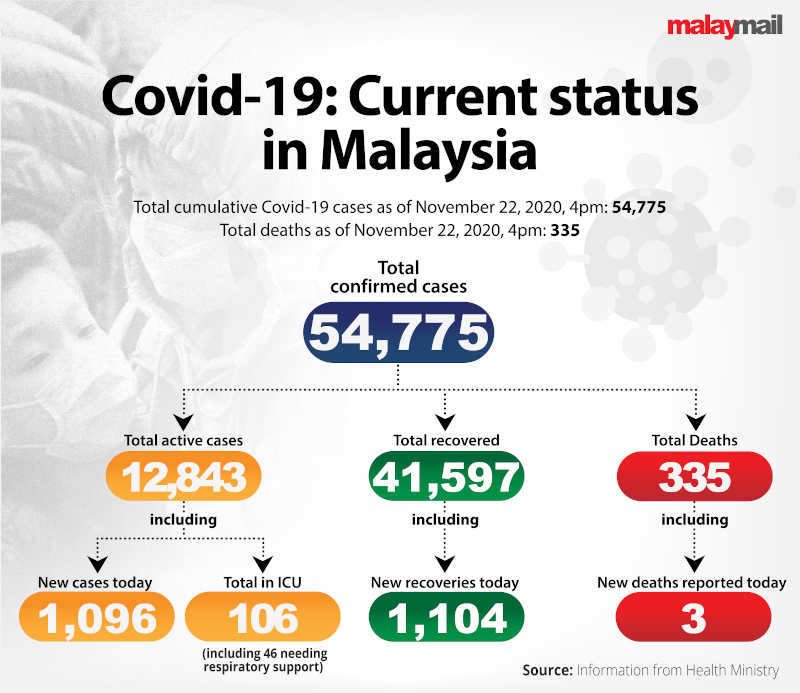