Dr Noor Hisham said a longer duration of the CMCO and tighter regulations over the social, education and sports sectors will further help to contain the spread of the virus.

“This means we succeeded, but we need to lengthen the duration of CMCO,” he told a press conference today.

Dr Noor Hisham was answering a question from the press on whether the government’s announcement today of four more weeks of CMCO on all states in the peninsular except for Perlis, Pahang and Kelantan was because the previous CMCO in certain states implemented on October 14 and October 29 has failed.

He explained that CMCO was meant to balance the health and economic needs of the country, which has worked well.

He said stricter rules might be enforced to reduce the movement on social sectors, especially the movement of people crossing the state and district borders.

“We need to strengthen our efforts in controlling and tightening social sectors.

“In the last few days, many people have crossed the state and district borders from red zones to green zones. For example, there is a case where someone from the red zone travelled to Kelantan and infected others.

“We need to relook whether we will use a method to tighten (the movement). We will use the same concept by allowing the economy (to run), but we control the social, education and sport sectors.

“We need to refine our actions to allow MOH to be able to implement the public health works such as doing screenings,” he said.

Dr Noor Hisham also explained that the spike of Covid-19 infection of 1,755 cases yesterday was due to screenings at prisons and detention centres in Tawau and Sandakan in Sabah as well as Seberang Prai in Penang.

“We have two spikes (in Covid-19 cases) before on October 24 and 26 when we were doing screenings at Kepayan Prison,” he said.

Earlier today, Senior Minister (Security Cluster) Datuk Seri Ismail Sabri Yaakob announced that most states will undergo CMCO from November 9 to December 6 after meeting with MOH today to stop the spread of Covid-19. 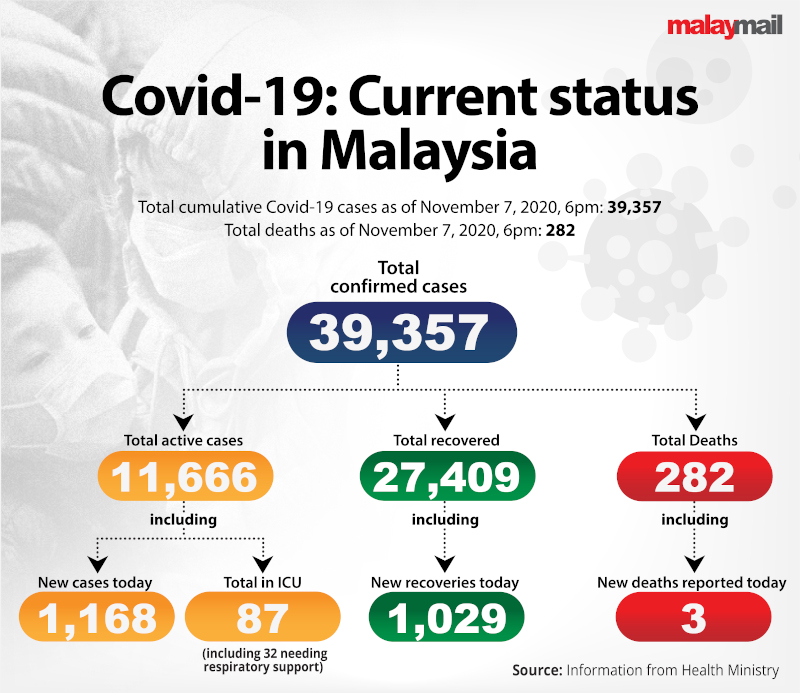