Earlier, Tun Dr Mahathir Mohamad published a blog post suggesting that Muslims ‘have the right to punish’ the French for their alleged wrongs committed against the community, amid escalating violence in France. ― Picture by Yusof Mat Isa
Follow us on Instagram, subscribe to our Telegram channel and browser alerts for the latest news you need to know.
By ZURAIRI AR

However, the tweet, part of a thread taken from his latest blog post, has been kept intact so far.

On Twitter’s guidelines and policies page, it said it recognises that sometimes it may be in the public interest to allow people to view tweets that would otherwise be taken down.

“We consider content to be in the public interest if it directly contributes to understanding or discussion of a matter of public concern,” said Twitter.

“At present, we limit exceptions to one critical type of public-interest content — Tweets from elected and government officials — given the significant public interest in knowing and being able to discuss their actions and statements.” 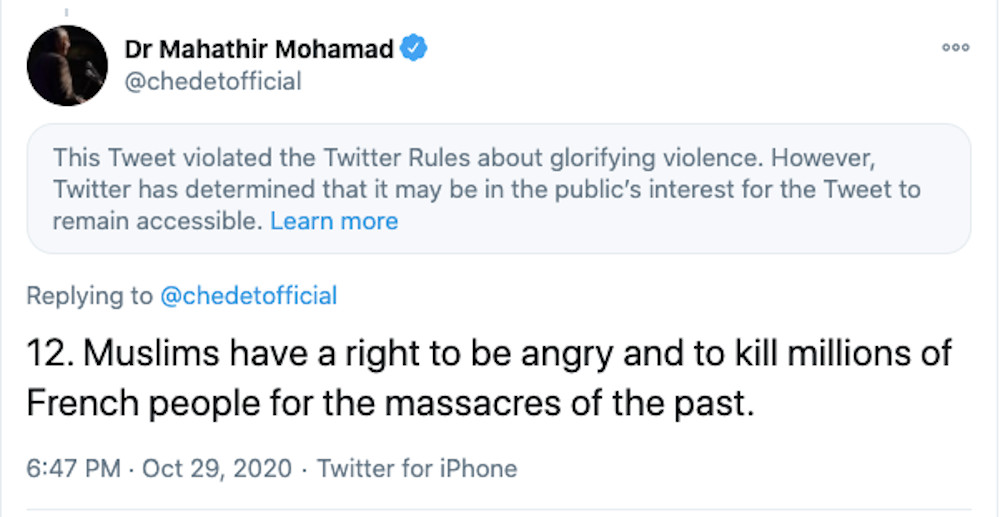 A screenshot of the controversial tweet by Tun Dr Mahathir Mohamad today. — Picture from social media

Prior to the action, the tweet saying “Muslims have a right to be angry and to kill millions of French people for the massacres of the past.” had received thousands of replies and retweets worldwide, many condemning it.

The remarks were part of a paragraph where Dr Mahathir continued with: “But by and large the Muslims have not applied the ‘eye for an eye’ law. Muslims don’t. The French shouldn’t. Instead the French should teach their people to respect other people’s feelings.”

Earlier, Dr Mahathir published a blog post suggesting that Muslims “have the right to punish” the French for their alleged wrongs committed against the community, amid escalating violence in France.

Posted just a few hours after a knife attack outside Nice, France that killed three people and injured others, the former prime minister said Muslims also deserve to be angry and a boycott against the republic will not even suffice.

Dr Mahathir’s post came as a knife-wielding attacker shouting “Allahu Akbar” beheaded a woman and killed two other people in a suspected terrorist attack at a church in the French city of Nice today.

The attack comes while France is still reeling from the beheading earlier this month of French middle school teacher Samuel Paty by a man of Chechen origin.

Since Paty’s killing, French officials — backed by many ordinary citizens — have re-asserted the right to display the cartoons, and the images have been widely displayed at marches in solidarity with the killed teacher.

That has prompted an outpouring of anger in parts of the Muslim world, with some governments accusing French leader Emmanuel Macron of pursuing an anti-Islam agenda.