A woman works from the comfort of home in Shah Alam April 15, 2020. — Picture by Miera Zulyana
Follow us on Instagram, subscribe to our Telegram channel and browser alerts for the latest news you need to know.
By IDA LIM

KUALA LUMPUR, Oct 22 — The government’s multiple changes to its order for management and supervisory staff in conditional movement control order (CMCO) areas to work from home from today has been confusing, and also implies “double standards” with their lives seemingly prized above the lives of other staff, the Malaysian Trades Union Congress (MTUC) said today.

Mohd Faisal Husin, secretary of MTUC’s Selangor and Federal Territories division, today criticised the way the government has been introducing policies in a bid to reduce the risk of Covid-19 infections spreading at the workplace, arguing that the government could have instead taken a more effective, practical and consultative approach.

He was commenting on the government’s work-from-home (WFH) order for an estimated 800,000 private sector employees and 200,000 civil servants in management and supervisory roles in Kuala Lumpur, Selangor, Putrajaya, Sabah and Labuan from today onwards until the end of the CMCO there, as well as the Ministry of International Trade and Industry (Miti) yesterday saying a maximum 10 per cent of those in management and supervisory levels would however be allowed to be in the office for four hours from 10am to 2pm for three days in a week.

“While we can understand the rationale for the WFH rule under the circumstances, what is unacceptable is the discrimination practised by the government.

“The net effect of this policy appears to be that the health and lives of managers and supervisors are more important than that of other staff.

“If it is aimed at reducing the chances of Covid-19 spreading, there should not be this form of discrimination in the first place,” Mohd Faisal said in a statement.

He said that such a policy has many “glaring weaknesses” and said it was obvious that the government had failed to consult stakeholders such as employers’ groups and workers’ representatives before coming up with the regulation.

Mohd Faisal said that the government should have just let companies decide on their own how to reduce the number of staff present physically at the workplace.

“Such decisions are obviously best left to the owners and operators of businesses to decide which worker is best to work in the office or from home. They know the situation on the ground better than the government.

“If the intended aim is to reduce the number of people at workplaces, leave it to businesses to decide which of their staff needs to work in the office or work from home, whether they are managers or not,” he said.

Mohd Faisal said that the government’s initial instructions for managerial and supervisory staff in CMCO areas to work from home and later amendment to allow a maximum 10 per cent of such staff to be present at the workplace was both “vague and difficult to follow”.

“It is time the National Security Council (NSC) and the ministers involved get their act together.  They must stick to one set of SOPs and issue them without going back and forth,” he said.

With the lack of clarity on the work-from-home directives for CMCO areas, both workers and management have been confused over how to implement the government order, he said.

“The recent directives from the National Security Council have been constantly changing so much so that many are not clear as to the actual intentions of the government,” he said.

“Employers in industries and banks are considered an essential service in areas under CMCO and they must have clear protocols to follow, not ambiguous regulations,” he added. 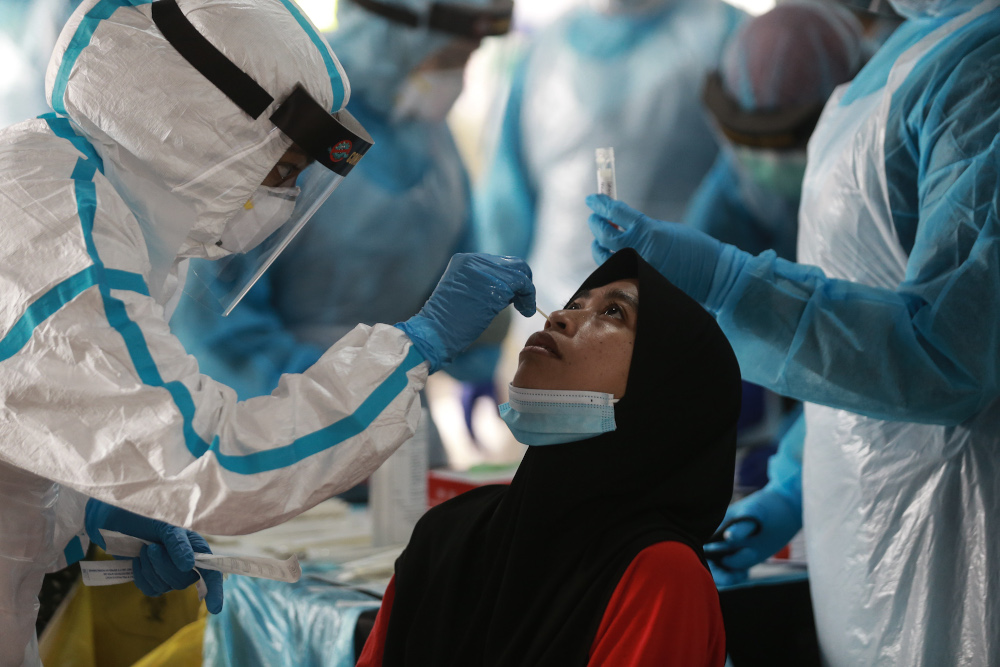 Questions about the swab tests

Mohd Faisal highlighted yet another ambiguous rule from the government, in terms of the latest requirement for Covid-19 swab tests for workers in red zones.

“Does it apply to workplaces in red zones or just to employees in red zones, or both? Also as workers are directly affected, a red zone must be clearly defined as it will require a great deal of mobilisation and enforcement to ensure the workers undergo swab tests,” he said.

“We question the practicality of this measure as those who show symptoms should not be even on the road let alone turning up at their workplace.

“Those who do not have symptoms but are from red areas must undergo mandatory tests periodically at clinics mandated by Socso and paid by their employers. This would be a more effective way to avoid new clusters without disruption at work places,” he said, adding that the authorities should also determine whether such areas have enough labs to run the tests.

Mohd Faisal also appeared to allude to the impracticality or false sense of security from undergoing for Covid-19 tests.

“And also how long will the validity period of an initial negative result be for practical purposes? As we know, they can contract the coronavirus soon after undergoing the swab tests. In such instances, the results will be absolutely misleading and inaccurate and can be dangerous.

“All these questions must be answered by Ismail Sabri and Azmin Ali. The NSC must come up with a FAQ on all relevant matters before imposing all types of restrictions some of which may not be practical,” he said, referring to Senior Minister Datuk Seri Ismail Sabri Yaakob and Miti Minister Datuk Seri Azmin Ali, who had both made announcements relating to the work-from-home policy.