Members of the public opt to walk to their places of work after the police blocked the entrance to Persiaran Sungai Buloh as the conditional control movement order kicks in on October 14 2020. — Picture by Ahmad Zamzahuri
Follow us on Instagram, subscribe to our Telegram channel and browser alerts for the latest news you need to know.
By SYED JAYMAL ZAHIID, SHAHRIN AIZAT AND ASHMAN ADAM


Traffic on the Federal Highway and the Damansara-Puchong Highway (LDP), among roads with the heaviest daily traffic, were practically free flowing with the number of vehicles significantly fewer than just a day ago.

At the time of writing, two Malay Mail reporters are making rounds around major roads and locations around Kuala Lumpur and Selangor, two of three zones placed under the conditional movement control order starting 12.01am this morning. Putrajaya is the third zone.

Under the order, inter-district movement is barred. Only workers with valid passed or authorisation letters from employers are allowed to move between districts. Malay Mail reporters had observed several police roadblocks on major entry and exit points between districts. 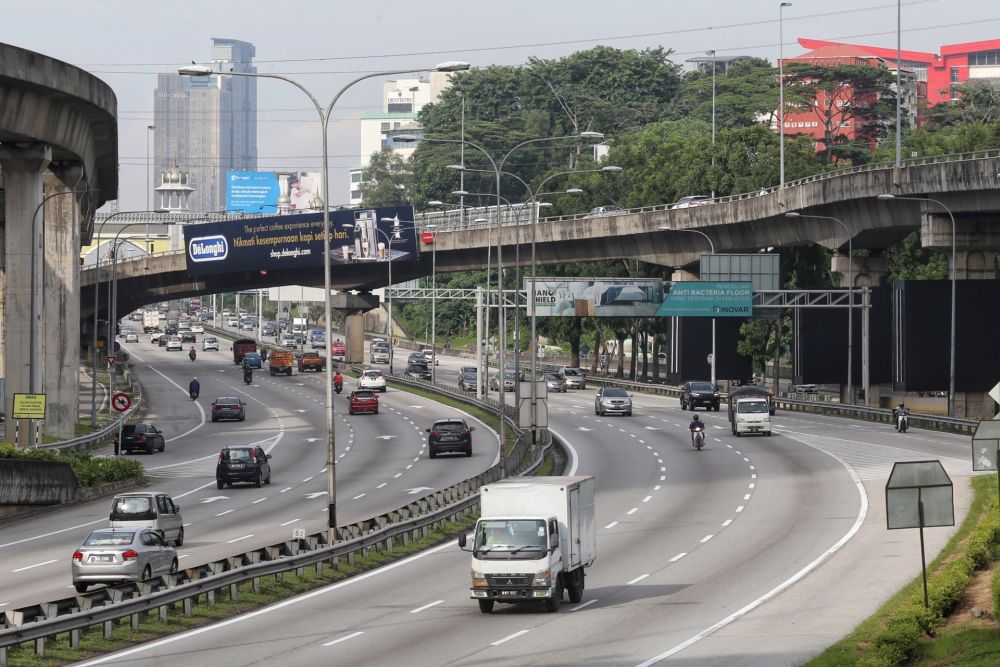 A general view of traffic on the Federal Highway October 14, 2020. — Picture by Choo Choy May

he current CMCO is different from the stricter version that replaced the movement control order in May in that it is effectively business as usual for all industries and businesses.

Employees may work from their offices, dine-ins are allowed at restaurants, and malls remain open although stricter health and physical distancing protocols will have to be enforced.

This means public transport will continue to operate for those who typically commute to work. Still, passengers on the LRT and MRT were visibly lower.

However, the dip in traffic this morning could point to more people working at home instead.

But some locations still experience considerably high foot traffic. One of them is the city’s busiest rail terminal, KL Sentral, where blocks of office towers sit adjacent to its surrounding.

This has caused some concern among those who still work at the office. 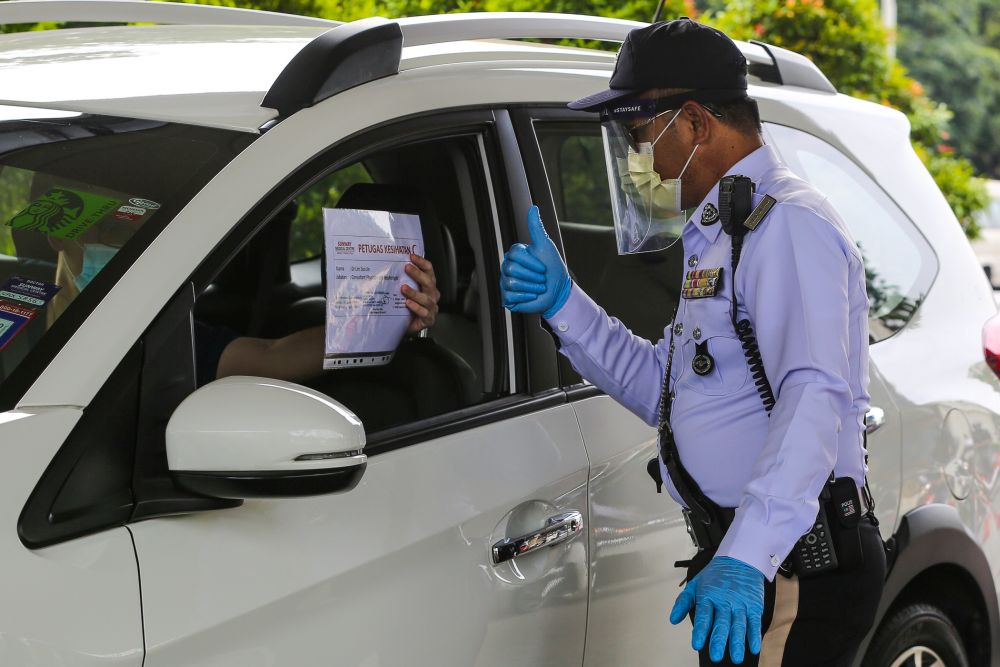 A traffic policeman conducts checks on vehicles during a roadblock on Jalan Sultan Ismail in Kuala Lumpur October 14, 2020. — Picture by Yusof Mat Isa

Yasmin Yusof, 31, whose office is in one of the towers, said having to come to work made her anxious.

“Coming back to work during CMCO is anxiety inducing, especially because I work near KL Sentral — a busy hub. I generally plan to avoid leaving the office while at work, and prefer to bring food from home to avoid making trips to restaurants or cafes for my meal breaks,” she said.

“The increasing number of Covid-19 cases has me worried. It doesn’t matter that the majority of cases are in Sabah - we’re already seeing major malls in the Klang Valley with Covid-19 cases, and we don’t know how many of us may be asymptomatic to the virus.”

Mohd Sjaffuddean, 50, said being an event security operation manager leaves him little choice but to work outside. His income is already affected by the previous lockdown and the current CMCO has made it all more worrying.

“I cannot afford to work from home because as an operation manager I have to hop from one place to another and EMCO has affected me mentally due to my company’s inability to pay for full month’s worth of salary and they have to cut half of my salary to cover their losses,” he said.

“With the payment relief plan ended last September, I think it has affected me the most due although I understand that the government has to take certain measures to stop Covid-19 from spreading.” 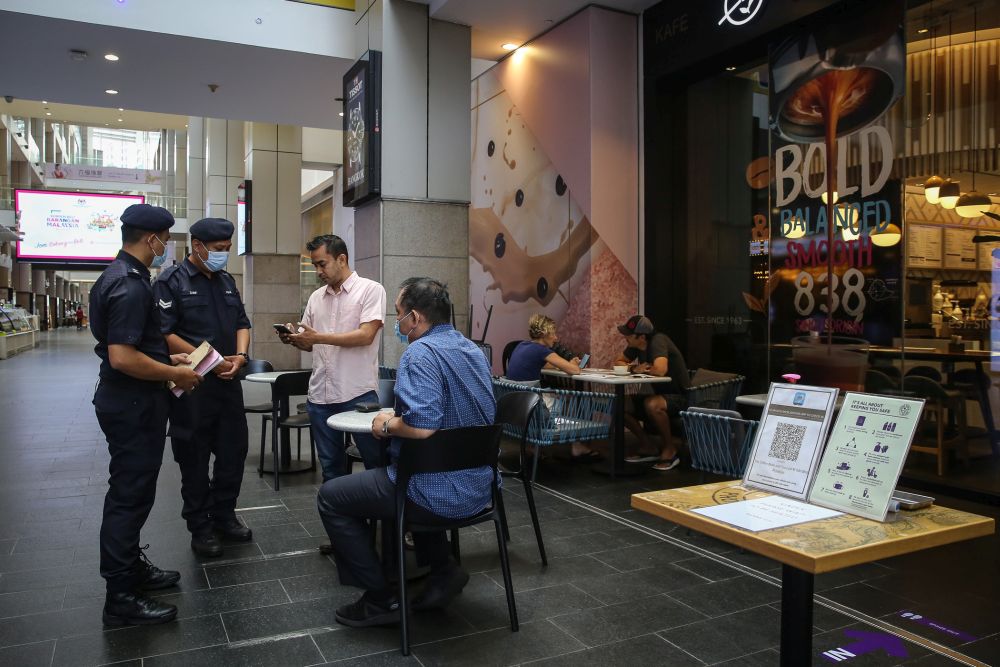 As of noon, few shoppers were seen in the many malls that occupy the area while waiters and waitresses of adjoining restaurants stood idly waiting.

Dewi Kudrawati, 34, a business owner, said the CMCO makes her worry about the prospect of losing more customers, who are mostly workers from nearby offices. Previous restrictions have already kept many working from home, and she fears that more would follow suit now.

“Since RMCO was announced by the government I’ve lost customers due to part timers getting retrenched and people start to work from home instead of going to the office,” she said.

“Sometimes the customers only buy white rice because they couldn’t afford other dishes, some of them pay with coins.”

Retailers and the food and beverage sector are likely staring at dwindling sales for the next two weeks with the inter-district travel ban expected to keep customers at home.

The industry last month announced slight improvement in sales since the restrictions were lifted but are still struggling to make up lost ground and return to pre-Covid-19 pandemic performance levels.